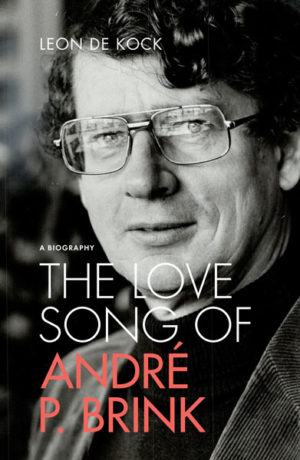 The Love Song of André Brink | By Leon de Kock | Publisher: Jonathan Ball Publishers | ISBN: 9781868427925
The Love Song of André Brink is the first biography of this major South African novelist who, during his lifetime, was published in over 30 languages and ranked with the likes of Gabriel García Márquez, Peter Carey and Aleksandr Solzhenitsyn.
Leon de Kock’s eagerly awaited account of Brink’s life is richly informed by a previously unavailable literary treasure: the dissident Afrikaner’s hoard of journal-writing, a veritable chronicle that was 54 years in the making.
In this massive new biographical source – running to a million words – Brink does not spare himself, or anyone else for that matter, as he narrates the ups and downs of his five marriages and his compulsive affairs with a great number of women. These are precisely the topics that the rebel in both politics and sex skated over in his memoir, A Fork in the Road. De Kock’s biographical study of the author who came close to winning the Nobel Prize for Literature not only synthesises the journals but also subjects them to searching critical analysis.
In addition, the biographer measures the journals against additional sources, both scholarly and otherwise, among them the testimony of Brink’s friends, family, wives and lovers.
The Love Song of André Brink subjects Brink’s literary legacy to a bracing scholarly re-evaluation, making this major new biography a crucial addition to scholarship on Brink.
Leon de Kock is a translator, poet, novelist and scholar. His translation of Triomf by Marlene van Niekerk earned him the South African Translators Institute award for outstanding translation. His rendering into English of André Brink’s love letters to Ingrid Jonker in Flame in the Snow won the SALA award for literary translation and the English Academy of Southern Africa’s Sol Plaatje Prize for Translation. He lives in Cape Town. 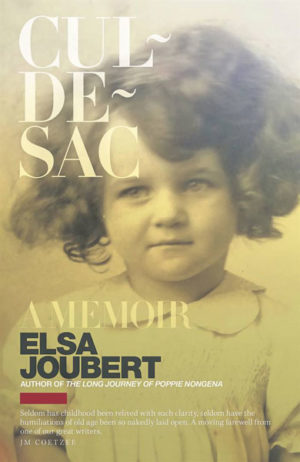 Cul-de-sac | By Elsa Joubert | Publisher: Tafelberg, an imprint of NB Publishers | ISBN: 9780624087793
Cul-de-sac is multiple award-winning author Elsa Joubert’s memoir about life after the death of her beloved husband, Klaas Steytler. Moving into an upmarket retirement home in Cape Town, she must come to terms with the loss of independence, friends who die and the changes in her memory and body. Rarely, if ever, has there been such an honest representation of ageing in South Africa. Vivid memories of her eventful life as a celebrated writer are skilfully woven into her story. Filled with wisdom, compassion and humour, this book will leave no reader untouched.
Elsa Joubert is the author of the South African classic The Long Journey of Poppie Nongena. Translated into 13 languages, it was selected as one of the 100 most important African books of the 20th century. The New York Times called the play ‘provocative’, and ‘arresting’. Joubert has won multiple literary awards.
Joubert married Klaas Steytler in 1950. He was the author of books such as Die walvisman and In die somer van ‘36. In 1982, Klaas translated her novel Ons wag op die kaptein into English and titled it To die at sunset. He passed away in 1998. 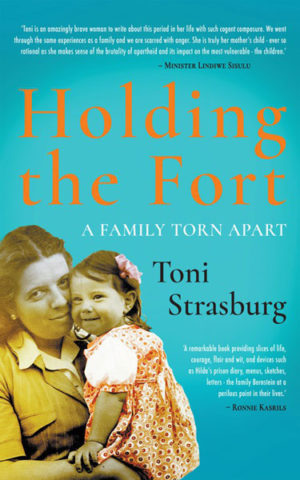 Holding the Fort | By Toni Strasburg | Publisher: Kwela Books, an imprint of NB Publishers | ISBN: 9780795709128
Activists Rusty and Hilda Bernstein were arrested with many other South Africans following the 1960 State of Emergency and held for three months without trial. Toni, their eldest, at 16 was left to look after her three younger siblings, and was their only child allowed to visit them in jail.
Hilda kept a diary of her time in detention, filled with letters to the children, drawings for the younger siblings, poems, plays and menus she made to keep her fellow detainees entertained. Years later, Toni pieces together her mother’s diary, excerpts from her father’s writings and her own recollection, trying to make sense of this tumultuous time.
Holding the Fort is the heart-breaking story of a family separated by unjust laws.
Toni Strasburg left South Africa in exile with her parents in the 1960s after the Rivonia Trial. She is a filmmaker and has documented apartheid-era wars in southern Africa, concentrating largely on the effects on women and children. Strasburg’s award-winning films include Chain of Tears, The Other Bomb and A South African Love Story. She has served as an International Peace Monitor and Election Observer for the UN.