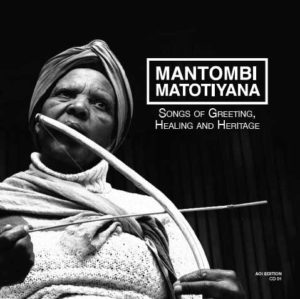 Mantombi Matotiyana adds her contemporary voice to a long tradition of bow-song in the Eastern Cape, documented by ethnomusicologists such as David Dargie. She gives a clean-cut performance of solo items on solo instruments in music that is contemporary even as it draws on that tradition. Each track begins with uhadi or umrhubhe, then her voice adds its own rendition of the song and she sometimes ends with voice alone. This illustrates the fluid transposing of the musical arts of bow-song from voice to instrument and back, leading one to conclude that with Xhosa-speaking people there is no special repertoire for instruments and the musician has to have enough skill to both vocalise these arts and play them.
The umrhubhe, uhadi and isitolotolo are chordophones of the Xhosa-speaking people who settled in what is now called the Eastern Cape. As musical bows, they are adapted from the hunting bow of the San people, the first south-eastern Bantu-speaking people to be called Xhosa, which means ‘angry man’ in the Nama/San language. When the uhadi is struck or the umrhubhe scraped, two fundamental pitches are produced, the first on the open string, while stopping the string with one or two fingers and thumb produces the second. These pitches are a tone apart and each brings into effect the overtone series, of which the first five sound strongest, producing a major-chord tonality on both pitches. 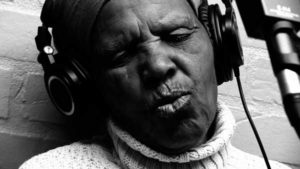 The uhadi has a gourd resonator, called iselwa, which grows like a pumpkin in the earth. This vegetable’s gourd is where the overtones or harmonic partials are amplified. With umrhubhe, also known as the ‘mouth bow’, the body is the resonator: the head, chest and entire buccal cavity amplify the overtones. From the overtone series comes the sweet and clear melodic sequence of the vocal style of ukombela. Thus the amplification and use of this overtone series is a testimony to the high level of skill and artistry of the performer. Mantombi is the champion of this art, and she has an extremely beautiful voice; when her umrhubhe playing starts, all defences melt away and one can be at one with the spirits.
Mantombi is also a brilliant isitolotolo player, and here she has to adapt her ukombela repertoire to a purely instrumental piece. In the recording, her metrical handclaps can be clearly heard, and in the studio she proved herself queen of the ‘one-take’, even when doing her over-dubs. Holding her posture all the time, she releases a powerful, healing voice. 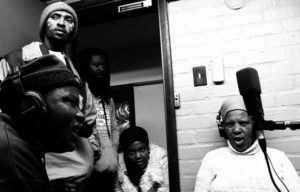 The repertoire on this album is made of items of greeting, healing and heritage. Track 3, for example – Molweni – is a common isiXhosa greeting. In tracks 1 and 2, Mantombi highlights the impact of migrancy and job-seeking in the ‘City of Gold’, Johannesburg; in track 4 she sings Wen’ use Goli uzathola into ezibandayo… (You who are in Johannesburg will come back and love would have died and there will be no more love for you). Most of the tracks are on the subject of healing, with the track 8 Umoya uthetile about the healing spirit and the call to divination, of how painful healing is in tracks 5 and 7. The rest of the repertoire is about heritage: Mantombi pleads for consciousness and awareness of the mind in track 10, Vukani (Wake up). Embo is a song very popular in the Cape that speaks of how indigenous people should go back to their origins or roots, to a place called eMbo. There are at least two types of indigenous African groups in Southern Africa according to John Henderson Soga: one is amaLala, the other abaMbo – which refers to both the spiritual existence of the indigene and a physical home or territory. When she sings, Masiy’ eMbo, singabaphi nathi-na? (track 12), Mantombi invites us to this spiritual/physical place of origin. 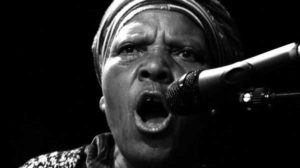 Mantombi ‘Mangwanya’ Matotiyana, daughter of Nqweniso and Maqhangase, was born near Tsolo in the Eastern Cape of South Africa in 1933. She met her future husband at a social gathering while playing her umrhubhe bow, and they had five children. After several years they separated and she moved back to her parents’ home to raise her children, staying there until her parents passed away. Mantombi moved to Cape Town in 1984 and started a small business in Nyanga Township, selling meat, homemade beer and beaded necklaces. Five years later, Zungula ‘Dizu’ Plaatjies, leader of the ensemble Amampondo, noticed her musical talents when she visited him in KwaLanga and incorporated her into his ensemble. Mantombi brought to it the umrhubhe and uhadi, the jaw harp – isitolotolo (sometimes called ‘jew’s harp’) – and her beautiful voice and aura; and became its doyenne, dressed in traditional style with her big blanket headwrap. Now a full-time musician, she still works with Plaatjies to this day. Mantombi has performed for Presidents Nelson Mandela, Fidel Castro and Thabo Mbeki in South Africa, has graced the stage of WOMAD in the United Kingdom and other stages in USA, Canada, Japan, Scandinavia, Zimbabwe and France. She lives in Samora Machel Township in Cape Town. (Sources: Mary Lewis and Prof Dizu Plaatjies)
This project was a collaboration between Africa Open Institute, Stellenbosch Konservatorium, South African College of Music’s (SACM) Music Technology Department and the SACM African Music Department. For more information, visit www.aoinstitute.ac.za

To keep up-to-date with the latest arts and culture news in South Africa, purchase the June 2019 issue of Creative Feel or subscribe to our monthly magazine from only R180.00 to R365.00 per year! SUBSCRIBE HERE!