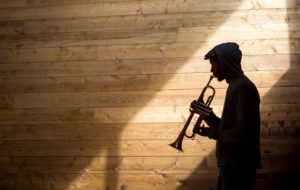 The Amandla Freedom Ensemble led by Mandla Mlangeni, the 2019 Standard Bank Young Artist for Jazz, will embark on its most ambitious project to date, titled Oratorio of a Forgotten Youth. A multidisciplinary genre bending collaborative performance by South Africa’s strongest forces within the jazz, classical and indigenous music scene. The Oratorio, directed by Mandla Mbothwe features the Cape Town Philharmonic Orchestra, the Gugulethu Voices Choir and a libretto by award winning poet and theatre practitioner, Koleka Putuma. The above will come together to bring a visually paired performance with sonic expressions set to invoke the spirit of the forgotten youth.
‘Our foray into the classical world is an opportunity to give a voice to new expression within the structural confines of Western Art, while also drawing from the deep well of indigenous music by creating cultural avenues that allow for audiences to tap into new and unimagined worlds’, says Mandla Mlangeni, bandleader of the Amandla Freedom Ensemble. The production, marking the 43rd anniversary of 16 June events through a musical and theatrical narrative, is a reflection of 1976 South Africa.
The Amandla Freedom Ensemble will perform the Oratorio on the eve of Youth Day at the Artscape Opera House in Cape Town on 15 June. This seemingly disjointed genre of art is attractive in its audacity to re-imagine a cutting edge jazz ensemble paired with South Africa‘s leading orchestra, the Cape Town Philharmonic and the Gugulethu Voices Choir. One is bound to be drawn to the sheer audacity of the project in that it will create new and interesting narratives, juxtaposed with choral renditions of the struggles of our past, while swinging through the perplexities of our present day, and conducting the foundations of our future.
Oratorio of a Forgotten Youth is presented in association with the Artscape Theatre, the University of the Western Cape, Centre For Humanities Research and Standard Bank.
Tickets cost R200 and can be purchased through Computicket.

The Amandla Freedom Ensemble is composed of:
Mandla Mlangeni on trumpet
Nhlanhla Mahlangu on alto sax
Gontse Makhene on percussion
Siya Makuzeni on trombone and vocals
Mark Fransman on piano and vocals
Ariel Zamonsky on bass