Since 1998, MTN has been one of the country’s most prominent supporters of the development of arts and culture in South Africa, with a particular focus on arts education.

MTN’s endeavour to support the development of the South African arts and culture sector was initiated with the official launch of the MTN Art Collection in November 1998, under the custodianship of the MTN Art Institute, with the first MTN Live Art teachers’ resource book on printmaking. The MTN Live Art Series of teachers’ resource books confirmed the MTN Art Institute’s commitment to developing and availing educational material for the arts and culture sector and consisted of three books, namely: Printmakers Resource (1998), Artists’ Careers Resource (2000) and Art from the African Continent (2006).
The MTN Art Institute was the first vehicle through which MTN could function as a key player in the art world, rather than a donor. From January 1999 to April 2002, it implemented several unique projects and partnerships in the arts arena. These first programmes and projects were initiated after research conducted by the art panel identified critical shortages of material and resources available to art teachers and learners in South Africa, compounded by a general dearth of training and learning opportunities in the cultural arena. ‘The uniqueness of the Collection’s education focus was in its philosophy of accessibility and mobility. Where public institutions had become increasingly moribund, the MTN Art Institute was in a position to offer a dynamic art education programme.’ – Ronel Kellner, Messages and Meaning: The MTN Art Collection (2006).

Some of the MTN Art Institute’s projects included: Art-to-Schools transported by the MTN Art Bus; publications such as the aforementioned Live Art Series and the Art Talk periodical newsletter, which saw approximately 115 000 copies of 14 volumes and 38 editions disseminated across South Africa; the Schools Art Awards, which recognised the exceptional performance of art teachers and learners from high schools in Gauteng, the Western Cape and the Northern Cape; the Young Curators Programme, which featured anti-bias and -stereotype workshops focused on senior secondary learners and first-year tertiary students; several in-house programmes at MTN’s head offices that focused on employees, such as the Visual Literacy Workshops, the Artists in Residencies and Controversy Corridor – where staff could engage with the MTN Art Collection’s more controversial artworks. In 2001, a public exhibition programme was launched with exhibitions such as Shifts in Consciousness: A Changing Heritage in Johannesburg and the Lines of Connection in Douala, Cameroon.
The Art Institute was MTN’s first corporate social investment initiative and through it, the Art Collection was utilised for an extensive fine arts-focused social outreach programme. However, by 2001, increasing pressure from ICASA required MTN to widen the spectrum of its social development investments and include initiatives that encompassed health, maths and science education, and enterprise development. In December that year, the MTN SA Foundation was launched and by April 2002, the Art Institute was fully absorbed into it as the Arts and Culture Portfolio. Before being incorporated into the MTN SA Foundation, the Art Institute’s programmes were – except for the 2001 collaborative exhibition Lines of Connection in Douala, Cameroon – mostly focused on Gauteng’s schools, cultural centres, galleries and beneficiaries. Being absorbed into a Foundation where MTN’s corporate social investments were expected to be seen where MTN’s business was operating, would eventually see the Art Collection and its programmes reach all nine provinces.

Since then, the MTN Foundation has made several large-scale investments in public exhibition programmes and arts and culture initiatives, achieving some of the following noteworthy accomplishments: It has celebrated South African milestones through the Resistance Reconciliation Reconstruction: Celebrating 10 years of Democracy exhibition, curated by Bongi Mautloa-Dhlomo and Monna Mokoena and accompanied by an education programme. The exhibition opened at the Pretoria Art Museum in 2004 and travelled to Durban, Alice and Kimberley until 2006. The MTN Foundation recognised the MTN Art Collection’s ‘coming of age’ through the seminal publication Messages and Meaning: The MTN Art Collection, launched with an accompanying exhibition and educational programme at the Oliewenhuis Art Gallery in Bloemfontein in 2006, before travelling to another six provinces, seven cities and eight national galleries until its final showing at the Unisa Art Gallery in 2012. The Foundation has paid homage to legendary South African artists and art centres by sponsoring the Rorke’s Drift: Empowering Prints book by Phillipa Hobbs and Elisabeth Rankin, which launched at the Durban Art Gallery in 2003 with an accompanying exhibition and educational programme, and which would travel to Bloemfontein, Cape Town, Dundee, Johannesburg and Kimberley until 2005. It partly sponsored the catalogue for the Dumile Feni Retrospective: Johannesburg Art Gallery exhibition by Prince Dube in 2006. The Foundation also sponsored the Jackson Hlungwani: A New Jerusalem retrospective exhibition, curated by Nessa Leibhammer, which opened at the Polokwane Art Gallery in 2013 and again at the UJ Art Gallery in 2014. Between 2009 and 2014, the MTN Foundation’s integrated portfolio strategy provided support for the development of community theatre groups and craft associations in Mpumalanga, Limpopo, the North West, the Eastern Cape, KwaZulu-Natal and the Free State. 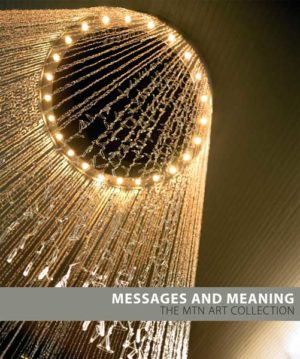 Remaining true to the MTN Art Collection’s original mandate to utilise it for arts and culture education, the MTN Foundation’s long-standing partnership with the Imbali Visual Literacy Project has culminated in its current sponsorship of an interactive digital platform for Imbali’s Adventuring Into Art series of eight teachers’ resource books. These resource books were produced from material collected over 30 years of arts and culture teacher training, which the MTN Foundation and MTN’s Art Collection were directly involved in between 2001 and 2012. This year’s sponsorship also enables Imbali to roll out another 120 copies of the resource books, with an accompanying workshop, to teachers in the Free State, Mpumalanga and the Eastern Cape.
The MTN New Contemporaries Awards, which are one of MTN’s best-known arts initiatives, have to be mentioned. From 2001 to 2012, a platform was created where the talents of young curators and contemporary South African artists could feature. This merit-driven exhibition programme, first curated by Clive Kellner at the Camouflage Art Gallery in 2001, sought to identify an upcoming curatorial talent and to contract that curator to source four to five South African artists, or collectives, who were creating the most exciting, relevant and cutting-edge contemporary art at the time. In 2001, Thembinkosi Goniwe and Usha Seejarim shared the overall prize. Following Kellner, Kathryn Smith was the selected curator in 2003 with Thando Mama as the overall winner. In 2006, the curator’s challenge was taken on by Khwezi Gule with Mlu Zondi as the winner of that year. Melissa Goba was appointed as curator for 2008 with Dineo Bopape as the overall winner. In 2010, the MTN New Contemporaries Awards were hosted outside of Gauteng for the first time at the KZNSA Gallery in Durban with Nontobeko Ntombela as curator and Kemang Wa Luhelere as the winner; and finally, in 2012 the MTN New Contemporaries Awards took a bow at the Castle of Good Hope in Cape Town with an exhibition of four collectives curated by Portia Malatjie and the award going to a collaborative installation by Unathi Sigenu and Khanyisile Mbongwa. Some of these curators and artists were introduced to the South African contemporary art world through this programme, and most have moved on to highly successful local and international art careers.

More recently, the MTN Foundation’s Art Collection Partnership Programme has seen the following very successful collaborations: An arts outreach programme to some of the most rural and disadvantaged schools in the Northern Cape with the William Humphreys Art Gallery in Kimberley. Support for the Voices of Women Museum’s Dreams, Wishes and Expectations exhibition, curated by Coral Bijoux, which creates a platform for reflective engagement with historical and current gender related issues in South Africa. Collaborative public exhibitions with university galleries to explore social relevancies and ‘gaps’ in the MTN Art Collection, and in the partnering institution’s collection, have provided considerably valuable stakeholder, provenance and art development opportunities. One such collaboration was the
Figuratively Speaking exhibition and educational outreach programme with the North West University Gallery, which opened at the Aardklop National Arts Festival in 2016 and featured at the FNB JoburgArtFair in 2017 with the launch of the web-based interactive art application LearnArt. The Shifting Conversations exhibition in 2017 and subsequent Continuing Conversations exhibition and development programme in 2018, with the University of Johannesburg Art Gallery, saw Shifting Conversations featured at the National Arts Festival in Makhanda in 2018, and this year, Continuing Conversations will also feature at this prestigious arts and culture festival.
Through the MTN SA Foundation’s management of the MTN Art Collection and its programmes, curators, art historians, artists and specialists have for the last 20 years, remained accountable to the original strategic objective of utilising an appreciating corporate asset to provide support to the South African arts and culture sectors – and will continue finding new avenues for the innovative support of this endeavour.

To keep up-to-date with the latest arts and culture news in South Africa, purchase the June 2019 issue of Creative Feel or subscribe to our monthly magazine from only R180.00 to R365.00 per year! SUBSCRIBE HERE!