Tickets are selling fast and time is running out to book for John Kani’s internationally acclaimed new play Kunene and the King, which comes to The Fugard Theatre from 30 April for a strictly limited season, hot off its world premiere at The Royal Shakespeare Company’s Swan Theatre in England. 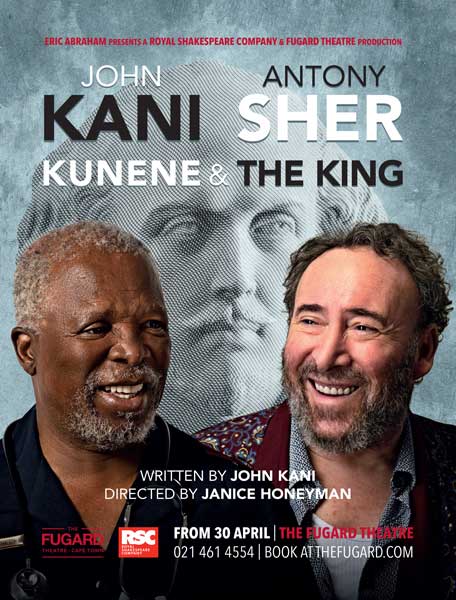 Eric Abraham presents this Fugard Theatre and Royal Shakespeare Company co-production, which reunites the powerhouse team of director Janice Honeyman (The Tempest, …Missing, Nothing But The Truth, Hello and Goodbye, The Fugard Theatre’s production of The Mother) with writer actor, activist and playwright, John Kani (The Tempest, The Island, Sizwe Banzi is Dead, and movie Black Panther), performing opposite Antony Sher (The Tempest, The Fugard Theatre’s production of Broken Glass, the RSC productions of King Lear, 2016 & 2018 and Death of a Salesman).
Kunene and the King has received rapturous reviews including five stars from The Guardian’s Michael Billington, who commented, ‘beautifully captures the complex divides of race, class and politics in a remarkable and moving new play’.
Kunene and the King is a moving and funny two-hander that provides a fitting tribute to mark the 25th anniversary of South Africa’s first democratic elections after apartheid. It is South Africa, 2019. Two men from contrasting walks of life are thrust together to reflect on a quarter century of change. John Kani stars as Lunga, a headstrong male nurse contracted to care for cantankerous actor Jack (Antony Sher) as he copes with terminal liver cancer.

Design is by Birrie le Roux (Shakespeare in Love, King Kong, Orpheus in Africa). Lighting is by Mannie Manim (The Tempest, Sizwe Banzi is Dead, The Fugard Theatre productions of The Mother, The Painted Rocks At Revolver Creek, The Blue Iris), Music is by Neo Muyanga (the Flower of Shembe, memory of how it feels) and Sound Design is by David Classen (Langarm, Shakespeare in Love).
‘There has been a phenomenal response to the international premiere of Kunene and the King and tickets are selling fast for our Cape Town run,’ says Managing Director of The Fugard Theatre Daniel Galloway. ‘Don’t miss your chance to see this remarkable production during its strictly limited season – grab your tickets now!’
Kunene and the King will be performed at The Fugard Theatre from 30 April 2019 Tuesday to Saturdays at 20:00 with matinees on Saturdays and Sundays at 15:00. Tickets ranging from R190 to R340 can be booked directly through The Fugard Theatre box office on 021 461 4554 or through The Fugard Theatre’s website at www.thefugard.com
The wonderful offers for Friends of The Fugard Members include a 20% discount (one member, one ticket) on all Premium Priced Tickets for performances from 7 to 11 May 2019. 20% discounts on all Premium Priced tickets will also be available to Members for Thursday performances throughout the season and bookings can only be made through the box office. No other discounts will apply. Not yet a member? Sign up now at the box office or online for priority booking and great specials!
There is also a 15% discount for pensioners and 10% discount for students and block bookings for certain performances throughout the season. These discounted tickets can be booked through The Fugard Theatre box office.
Kunene and the King has a recommended age restriction of no under 12 year olds.