The eagerly anticipated re-launch of Dance Umbrella Africa 2019 from 31 March to 7 April at the South African State Theatre, #DUA2019 will feature South Africa and the world’s most prolific dancers and choreographers, including Lulu Mlangeni, Sonia Radebe and Julia Burnham, Phumlani Nyanga, Dirk Badenhorst, German-Austrian Helge Letonja, Madagascar’s Gaby Saranouffi, and works from dance companies such as Vuyani Dance Theatre and Moving Into Dance. 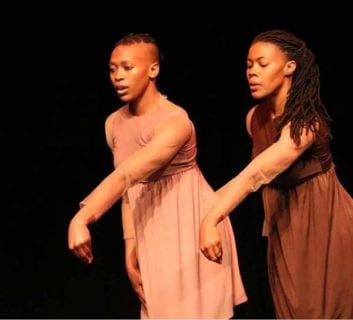 For the first time, Mlangeni, Radebe and Burnham will collaborate to put together a brand-new work that will premiere at Africa’s dance festival. The details of the new piece are yet to be established. The formidable female trio will perform at the launch of the festival that is billed to take place on 31 March. Their performance forms part of a double bill that will feature an authentic pantsula dance performance titled My Foot, My Journey by Eddie Ndou. The piece highlights young people who are faced with challenges of unemployment and poverty in the country.
Another figure that is bound to drop jaws and set tongues wagging is the free installation The Dish, by the Wits University lecturer, performing and visual artist, Oupa Sibeko. The Dish is a dance and a photographic exhibition where Sibeko plays with a DSTV dish portraying effects of media on the black body.
The internationally renowned dancer and choreographer Gregory Maqoma and the German-Austrian choreographer Helge Letonja will present their critically acclaimed European-South African coproduction Out of Joint, which responds to the experiences of human indignity all over the world, while In-Between by Phumlani Nyanga will focus on the feeling of being driven by external constraints and trapped in material needs amidst excessive economic growth. This double bill will cost you R100 on Monday night, 1 April.
On Tuesday, 2 April, the revered Malagasy dancer Gaby Saranouffi wages a fight against the violence on women and children in a solo piece titled #MOI. ‘When the body has been abused, raped, destroyed, devastated, what’s left?’ asks Saranouffi. Ballet choreographer Dirk Badenhorst fuses two distinct dance disciplines, pantsula and ballet, to bring us a love story entitled Bengingazi – I didn’t know.  The work is an innovative fairy tale that follows a Sowetan pantsula dancer and a ballerina who fall in love despite their differences. It plays on Wednesday, 3 April.
Moving Into Dance will showcase Still Marching, which is a magnificent work that celebrates the lives and commitments of women, on 4 April. Vuyani Dance Theatre Company presents Gister Maobe, choreographed by their senior dancer Otto Nhlapo on Friday, 5 April. The work reflects on oppression tied to the hands of time, the books of law, the boundaries of land and the ruthless division of colour.
The revamped DUA is curated by the acclaimed award-winning dancer and choreographer, and South African State Theatre’s Deputy Artistic Director Mamela Nyamza, entrusting Nelisiwe Xaba and Sello Pesa with dramaturgy. The 2019 instalment will showcase 50 works by over 100 artists from various provinces in South Africa, extending to parts of Africa, Europe and North America, under the theme ‘Figure-ring the State of Dance in Africa!’
DUA 2019 Tickets will cost from R80 to R100. There are day passes specials available at Webtickets (online at www.webtickets.co.za or at Pick n Pay stores nationwide). Webtickets is State Theatre’s newly contracted service provider for ticket sales.