In this fascinating portrait of a family, Terry Kurgan, a well-known South African artist/photographer, uses the medium of writing for a series of meditations on photography that give us startling insights into how photographs work: what they conceal, how they mislead, and what provocations they contain. Each essay takes up the thread of the story of her own family’s epic journey across Europe as they flee – country by country – Nazi occupation and eventually reach Cape Town, South Africa. It is a powerful, intimate and beautiful portrait of a family, and an important historical document of a time that should never be forgotten – both their journey and their years in South Africa, which she shared in an interview with Creative Feel’s Lore Watterson.

‘My Polish grandparents never discussed their past. There is very little evidence beyond a small, battered album of black-and-white photographs, each one captioned on the back in my grandfather’s spidery cursive handwriting,’ writes Terry Kurgan. This ‘small, battered album’ and the daily diary that Kurgan’s grandfather kept for 30 years form the basis of Everyone is Present and give the book a unique depth. Through these essays, Kurgan explores family dynamics and lets us in on some of the family secrets and by the end, the reader feels part of the family.
At the centre of the family’s story is one particular image. ‘But this photograph in my family’s album records a day in the summer of July or August 1939. And, at the very outset of what was to become one of the greatest atrocities of the twentieth century, my grandmother was fucking Doctor Lax. He is the man in the photograph and that child is my – then, four years old – little mother,’ writes Kurgan. But, as her mother Leonia is still alive, and was involved to an extent in the creation of the book, Kurgan doesn’t reveal everything. ‘This photograph masks a secret. A secret that is too big for this page.’
Upon Kurgan’s grandmother’s death, her mother Leonia packed and emptied her parents’ house. Among the personal objects that Leonia preserved were her father’s handwritten diaries that her mother had left largely undisturbed with other documents and papers in the drawers of his desk.
‘The diaries begin with an air raid alarm, which wakes my grandfather from a dream at 5:20 am on the first day of September in 1939. Germany has just attacked and invaded Poland. The first years of the diaries describe the family’s flight from their hometown of Bielsko, east towards the city of Lwów, and then several years of their difficult, sometimes desperate journey, through and ultimately out of Europe; an unwieldy, combative extended family group of ten people. Refugees, unwelcome every place they turned. They lived in Bucharest, Istanbul, Ankara, Aleppo, Baghdad, Basra, and sailed via the Persian Gulf to Muscat and Karachi, then to Bombay. Then to Mombasa, and finally, in April 1941, and quite unintentionally, to Cape Town at the bottom of Africa, their journey’s end.’ 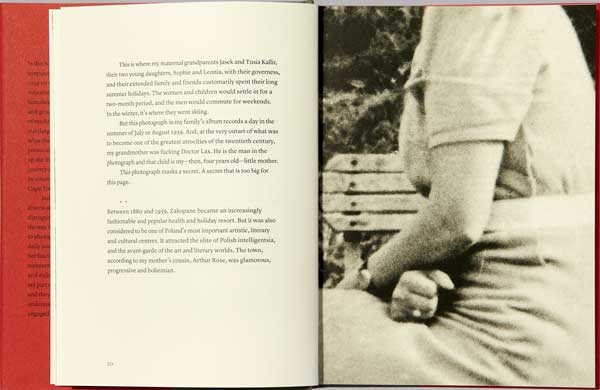 It appears that her grandfather kept these daily diaries through most of the rest of his life in South Africa. ‘They are dense and agitated volumes, with tiny cursive handwriting crowded into notebooks, which he fashioned for himself out of sheets of unlined paper pierced in the top left-hand corner with a big darning needle.’
As Kurgan explains in an interview with Creative Feel: ‘I am doubtful as to whether he intended them to be read by anyone after his death, but first my grandmother, and then my mother, attempted the task of translating the first two years; my grandmother entirely in her own favour, editing out unflattering, fractious family dynamics or any hint of criticism of herself, which only became evident when my mother took these same pages to a professional translator. My mother was hoping to find in them somewhere the firm evidence that he loved her, I think.’
Terry Kurgan is based in Johannesburg. Working across a broad range of media, from drawing, writing and photography to enlisting public participation in her production processes, her work emerges in the space between visual art and an engagement in the public sphere. Kurgan’s artistic interest over many years has been in photography: in the complex and paradoxical nature of photographic transactions. She explores this through a diverse body of artwork that foregrounds notions of intimacy, pushing at the boundaries between ‘the private’ and ‘the public’ in the South African public domain. Her projects have been sited in spaces as varied as a maternity hospital, a public library, a popular Johannesburg shopping mall, an inner-city park and a prison.