Amid a remarkable schedule, William Kentridge made the space and time to honour a commitment to Artist Proof Studio (APS). We are enormously privileged and honoured to present the very beautiful Dada Picnic at the Investec Cape Town Art Fair (ICTAF) from 15 to 17 February 2019. Kim Berman, director and co-founder of APS, shares an account of their collaboration on the artwork. 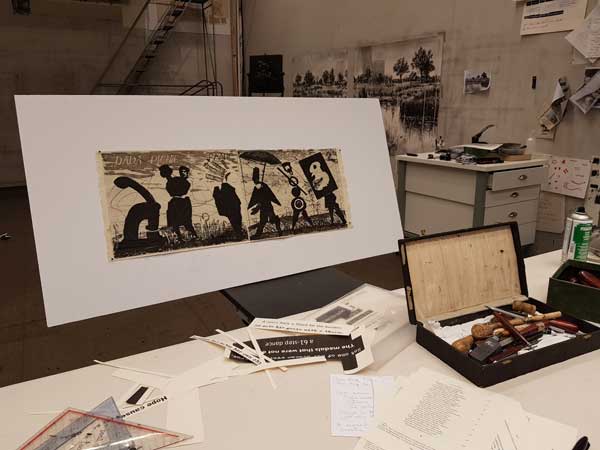 At 16:00 on Christmas Eve, one hour before he left for the airport, William Kentridge signed the trial proof of Dada Picnic.
William drew the sugar lift image on the plate on Thursday evening of December 20th, after everyone else had closed for the holidays. Pontsho Sikhosana came in to APS on Friday morning to assist in etching and printing the first layer of the plate before I took over the work on an inspiring collaboration.
Over Saturday, Sunday and Monday, William repainted the sugar-lift, dry-pointed and scraped away, and I proofed and etched four more layers of aquatint etching, blocking out selected areas until he was satisfied with the increasing richness of tonality and complexity.
The final result consists of dense layers of different tonalities of aquatint, and witty texts scraped out and re-etched: ‘Panic’ receding then re-amplified; ‘always remember me-me’, words from a headless-systems-character disappearing and then reinstated in the negative through etching over text written with a marking pen on the plate.
The two plates consist of a single procession of key moments by Dadaists (Francis Picabia, Jean Arp and Max Ernst) and the second represents office characters, including a portrait of his embossing stamp or ‘chop’ that sits on one of his work tables in the studio.
A version of this composition is currently in production as a monumental tapestry by Marguerite Stephens and her weaving studio. 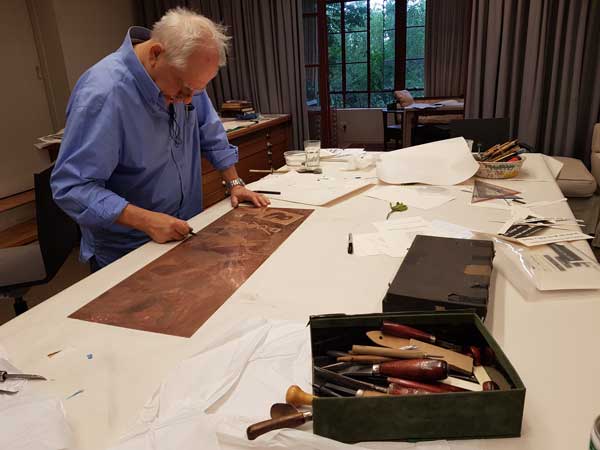 William Kentridge had just returned home for ten days from a gruelling international schedule, after the production of The Head & the Load showing in New York in December, fitting in another major exhibition in Basel and working furiously towards an exhibition of new work at the Marian Goodman Gallery in New York in March. On Christmas Eve, he was on his way to Australia to rehearse a production of Wozzeck at the Sydney Opera House opening in January.
The production of The Head & the Load, which ‘seeks to right a wrong in the world’s historical consciousness’ and is ‘about all the contradictions and paradoxes of colonialism that were heated and compressed by circumstances of the war,’ has been described as one of his most ambitious projects yet undertaken. The acclaim of that production was expressed in the New York Magazine review, consolidating Kentridge’s position as one of the greatest living artists of our time:
‘Today’s art world is powerfully drawn to Kentridge because he’s mastered one of our period’s greatest challenges: how to create an art of cultural authority, one that takes the moral measure of our time.’
This collaboration was a privilege and testimony of William Kentridge fulfilling a commitment to APS to make a new work for the ICTAF.