The V&A Waterfront in Cape Town attracts roughly 24 million visitors each year and is most frequently thought of as a shopping destination, with Victoria Wharf Shopping Centre, the Watershed, Alfred Mall, the Clock Tower, Dry Dock District, Breakwater and, its most recent addition, the Silo District. 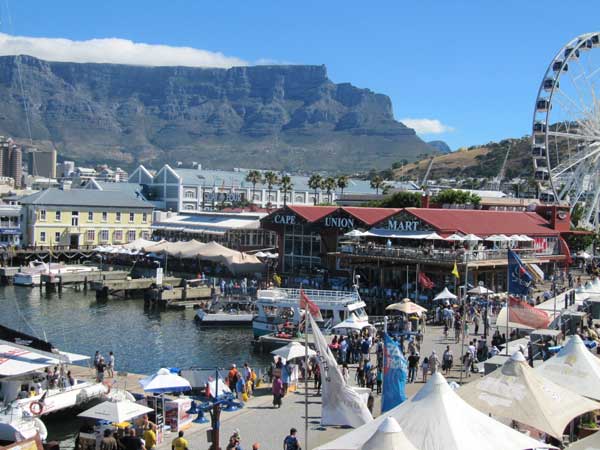 The V&A Waterfront isn’t all about rampant materialism and hedonistic pleasures. It is still a fully functioning harbour; there are attractions for the history buffs; and, of course, with the opening of Zeitz Museum of Contemporary Art Africa (MOCAA), the Silo District has become one of the most important exhibition spaces of contemporary art in South Africa.
The V&A (Victoria & Alfred) Waterfront was named after Prince Alfred, who tipped the first load of stone to start the construction on the harbour in 1860, and his mother, Queen Victoria. The V&A Waterfront encompasses many landmarks, including the Chavonnes Battery fortification, which dates back to 1725 and is the harbour’s oldest heritage site. The grand old Castle of Good Hope and its coastal cannon batteries like the Chavonnes Battery and the Amsterdam Battery were the watchdogs that guarded Table Bay and its road-stead from invaders in the 17th, 18th and 19th centuries.
Foreign ships making landfall at the Cape were expected to fire a salute of blank shots on entering the bay, not only to signal their friendly intentions but also as a greeting. The salute would be answered by the coastal fortifications – on the understanding that a volley of cannonballs might meet a ship that did not fire a greeting.
There is the infamous Breakwater Prison. It was constructed in 1859 to house British convicts working on the breakwater, which eventually allowed the harbour to be built. Also to be found are the Robinson Dry Dock (one of the oldest operating dry docks in the world) and the Iziko Maritime Centre.

A more recent addition is the Nobel Square in the Waterfront, which pays tribute to South Africa’s four Nobel Peace Prize Laureates: the late Albert Luthuli, Archbishop Emeritus Desmond Tutu, former State President F.W. de Klerk and former President Nelson Mandela.
The larger-than-life bronze sculptures of the four laureates were created by internationally acclaimed artist Claudette Schreuders to reflect the ambiguities of the search for an ‘African’ identity in post-apartheid South Africa. Also here is the Peace and Democracy sculpture by Noria Mahasa, which symbolises the contribution of women and children to the struggle. It’s etched with pertinent quotes by each of the great men, translated into all the major languages of the country.
Mandela, speaking at the original launch of the project in December 2003, described the Nobel Square as a gesture celebrating and promoting reconciliation. ‘We need to celebrate ourselves and our achievement as often as we can.’ Tutu, the 1984 recipient, said that the real heroes of South Africa were the so-called ordinary people. ‘What happens here is not a tribute to the four of us, but to the people of South Africa.’ The project has the blessing of the Nobel Institute in Norway.

At the recent SAPOA Property Development Awards for Innovative Excellence, the Silo District won the prestigious Best Overall Building, Best Overall Heritage Building, and Best Overall Refurbishment Awards for the Grain Silo conversion to the Zeitz MOCAA. The property also won the Best Mixed Use Development and Best Green Development Awards for the overall Silo District.
The old Grain Silo, originally built in 1920, remains the tallest building in the V&A at 65 metres. The V&A Waterfront’s R500-million refurbishment of this historic Grain Silo into a fit-for-purpose home for Zeitz MOCAA is a work of art in itself, while still preserving the historical look, feel and many features of this iconic building.
The refurbishment required converting over 100 27-metre tall concrete silo tubes, each with a diameter of up to 5.5 metres, into a functional space to house the not-for-profit museum. The art collection is showcased in a custom-designed space that occupies nine floors (9 500 square metres), while 6 000 square metres have been dedicated to exhibition space. The remainder of the space was used to create the Silo Hotel, a 28-key luxury boutique hotel.
The new industrially aesthetic pedestrianised space invites visitors to meander along the working harbour with its ships, cranes, gantries and other technology required in a working harbour.