Cape Town Opera’s Youth Development and Education Department recently embarked on an evocative new project with young learners in Khayelitsha and Stellenbosch: The People of Nyalashishi (a fictitious place, meaning ‘People of the Soil’). 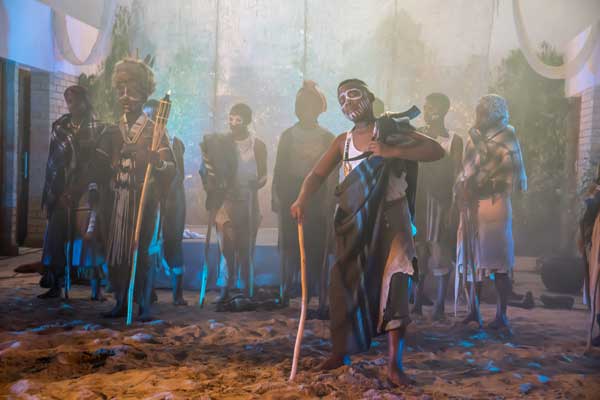 The new musical production evoked memories and stories of San and Xhosa cultures, and their relationship with water and other natural resources. What do these cultures’ past practices teach us now during a time of drought and environmental degradation? How can we learn from the past to influence our future?
Twenty-five students at Khayelitsha’s Chris Hani Arts & Culture High School, and 19 students at Makupula Secondary School in Kayamandi, Stellenbosch, participated in this workshop-style musical theatre production. Over the course of three months, director Mhlanguli George and composer Bongani Magatyana met with the school learners on a weekly basis to create, rehearse and perform the text and music.
‘Theatre is not only about speaking the lines,’ says George, explaining how he introduced theatre concepts and techniques to the learners. For this project, George and Magatyana had to conduct intensive research on San culture and language. All 44 students were taken on a road trip to the !Khwa ttu San Culture and Education Centre on the West Coast, and cultural historian and traditional music artist Dizu Plaatjies taught the creative team about indigenous musical instruments.
Magatyana is Xhosa, making the music composition familiar and easy. ‘It was an opportunity for me to introduce traditional music to the learners, who are from the city, and not necessarily from our villages in the Eastern Cape,’ he says.
The People of Nyalashishi was created with funding from the National Geographic, Rand Merchant Bank, Maria Marina and the Western Cape Government. Performances took place at Chris Hani on 10 October and at Makupula Secondary on 25 October 2018.