Andrea Bocelli, the biggest-selling solo classical artist today, returns after 14 years with an album of all-new material entitled Sì. At the centre of the new record is a spine-tingling duet between father-and-son, as 20-year-old Matteo Bocelli steps into the limelight to duet with Andrea on ‘Fall On Me’ – a beautifully poignant song which reflects the bond between parent and child. Bocelli also teamed up with some of the hottest musical stars in the world – reuniting with his friend Ed Sheeran after their chart-topping ‘Perfect Symphony’ on a brand-new song called ‘Amo Soltanto Te’ (written by Sheeran with lyrics by Tiziano Ferro) and joining with pop sensation Dua Lipa on the single ‘If Only’. Crossover superstar Josh Groban and classical soprano Aida Garifullina also duet with Bocelli on the record. 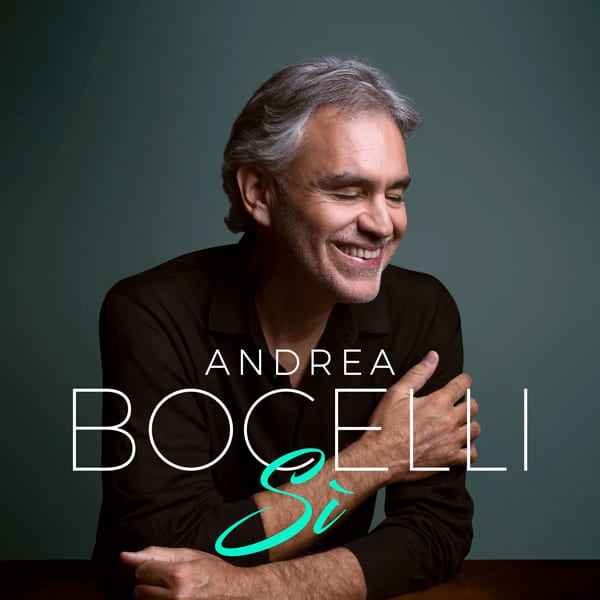 And so, in his 60th birth year, Andrea Bocelli is proud to return to where it all began. His uplifting new Decca Records album, Sì, gives us a window into the world of this extraordinary singer and global icon.
What do you do when you’ve done and achieved seemingly everything? When you’re one of the world’s top-selling contemporary classical musicians, with lifetime record sales of 80 million copies, and an unparalleled reputation as a live performer?
What is left to achieve when you’ve been honoured by popes and presidents and royalty, and performed in many of the greatest international concert halls and opera houses (and football stadiums)?
What is the next goal after duetting with a diverse host of talented young female vocalists, helping one of the biggest pop stars in the world reach a whole new audience, and celebrating with a compatriot and friend one of the most remarkable modern fairy tales in global football?
So, when you’ve sung with Katherine Jenkins, Ariana Grande, LeAnn Rimes and Jennifer Lopez… wowed crowds in New York City’s Central Park with a star-studded concert featuring Céline Dion, Tony Bennett, Chris Botti and David Foster… sung ‘Nessun Dorma’ and your signature song ‘Con Te Partirò (Time To Say Goodbye)’ for Claudio Ranieri’s Premier League-winning Leicester City and their rapturous fans at the King Power Stadium in May 2016… and collaborated with Ed Sheeran on 2017 smash ‘Perfect Symphony’… where, and what, next?
If you’re Andrea Bocelli, after 15 albums covering the classical and pop canons, you go back to the roots, both of yourself, and of the music that formed you. You take the time and the effort – and perhaps the risk – to find a batch of new songs. You seek out original compositions, worthy of the all-time classics with which you have established a world-beating reputation as a maestro of interpretation.
‘I wanted to go back to my memories of being a young man playing at a piano bar. Obviously, since then I’ve produced lots of albums, sung lots of covers, performed many other things. But at a certain point, I said to myself: “Maybe it’s time… Maybe the time has come to put my effort into finding new songs.” Like starting all over again in my career.
‘But,’ the 59-year-old Italian superstar notes with a smile, ‘beautiful music takes time.’
Sì features a set of powerful, emotional songs, some featuring interpolations of classical themes (from, for example, Bach and Massenet), and all-encompassing a positive message of the power of love, family and music. The album features songs in both Italian and English, contributions from some of his key writer/composers, and an emotional homage to his wife, Veronica.

Explaining the lengthy passage of time since his last album of new material (14 years), Bocelli explains: ‘I have always thought that it’s extremely difficult to find songs that are worthy of being sung for the public – and then hoping that the public will have the necessary time to devote to try and understand those songs. So, yes, it took time.
‘Secondly, I was involved in many other things in those years,’ he adds, with no little understatement. ‘I sang and gave my interpretation of major songs of the past.’
With typical care and thought, Bocelli embraced his new creative challenge. His focus: on finding a collection of songs that would speak to his emotional and intellectual interests, fit with his matchless repertoire, and also present the chance to offer something new, musically, to an audience that stretches to every corner of the globe.
‘Every day at my home I get songs proposed from all over the world. People send songs for me to listen to, to evaluate… And we listen to them all, actually,’ notes this man for whom music has been a lifelong obsession. ‘Then, it’s not always easy to discover precious jewels in the midst of so many materials that are sent here. It’s hard to believe but a lot of things arrive in terrible condition – people send me a song that has been recorded on their cell phone!’ he laughs.
‘It can be really difficult to understand the worth and the value of a song, which sometimes makes it a matter of luck, finding a great song in such unpromising circumstances!’
Working in his studio in his home on the Tuscan coast, he sifted through a wealth of material. As well as the unsolicited submissions, there were also compositions from writers with whom Bocelli has previously worked.
‘We have authors who have always written for me, close collaborators. So, working with them, and also looking further afield, we slowly put together a collection of titles. It’s really important to me to give the public, which means a broad audience of people, songs that are worth singing. It’s quality that counts, not quantity.
‘An album is like a human body,’ he expands, ‘it must be in unison, as it were, a body of work, where all the organs contribute to the whole result.’
For this consummate artist, always passionate about serving both the music and his fans, it wouldn’t be enough to rely on the fact that he has one of the all-time great voices. The material had to be equally magical.
He nods. ‘This is what I have tried to do with this album: something that could be recognised as unique but it has a beginning, middle and an end to it. Something that had all those key elements needed in order to distinguish it from everything else that’s on the market.’
‘Ali di libertà’ is a suitably uplifting opening to Sì.
‘This is a song I like very much. It’s the most songlike song on the whole album. It’s a song that is very fresh, very topical. It’s an easy tune – but at the same time it’s very authentic, very genuine. It’s not a constructed song. That is, those things that are constructed at the drawing table in order to be superficially pleasing. This is a song of depth and meaning.’
Equally ‘real’ is ‘Miele Impuro’, written by the great Francesco Sartori.
‘Francesco is a real author – an auteur we should perhaps say. He co-wrote “Con Te Partirò”, and other fantastic songs that were very important in my career. The lyrics are by an Italian poet, I believe a good poem must contain a secret. If there is no secret behind a poem, it is worthless. So this text has a secret and that’s why it’s so powerful.
‘But if we listen to it even just knowing the title,’ he continues, ‘you can understand that there must be a secret because miele impuro means “contaminated honey”. It would be difficult to define honey as contaminated or impure, so you must wonder what is wrong with it…’

Sartori is also the co-author of ‘Qualcosa più dell’Oro’. This song is especially meaningful to Bocelli as the other writer is Lucio Quarantotto, the co-writer of ‘Con Te Partirò’, who died in 2012.
‘The dramatic death of Lucio…’ begins Bocelli, clearly still troubled by the loss of his friend and collaborator. ‘The difficulties and controversies, as it were, in his life allowed him to write songs with very forceful secrets – think about the lyrics of “Time to Say Goodbye”. So this song for me especially has a very important meaning.’
But, rather than a tribute to Quarantotto, Bocelli says the opposite is true of this new song. ‘I think of it as a tribute from him to me. More than a tribute: it was a gift to me, a gift before he left us… And if it becomes a success, then it will be my tribute to him.’
There are more personal connections in ‘Vivo’, which was written about Bocelli’s wife.
‘This is a song that really moved me the first time I heard it. One day the writer Riccardo Del Turco just came by and gave me this song – it was a total surprise! And it touched me deeply. I immediately understood it was my story with the person who lives with me, who has lived with me for many years – but it’s a story told with great delicacy, passion and friendship. Clearly, the author of this song knows me, knows us, knows our entire story artfully. Riccardo put his soul into the writing of this song, and the result is a song that is genuine and authentic and full of love.’
We can say the same about the whole of Sì. With all the vocals recorded at home (‘when you record a song in a pop context, it’s extremely important to have the comfort of my own home’), and with production by the legendary Bob Ezrin (Pink Floyd, Lou Reed), this is an album about heart and soul, positivity and family, melody and magic.
What do you do after you’ve achieved the myriad successes of Andrea Bocelli? You go home, you go deep, and you go where your love lies. You say yes to life. You make Sì.
And as for that simple, powerful title, Bocelli says this: ‘First of all, let me say, a lot of work went into finding the right title!’ he laughs. ‘Everybody made suggestions, but in the end, my son Amos had the idea. And right away, it was the perfect title. In this historical period we are going through right now, we too often say no. But “yes” is the word you say when you have your first kiss, when you agree with somebody, when want to make someone feel good. “Sì” is the word you say every time things will end well. For a thousand and one reasons, “sì” is the expression of a positive, powerful, human word and feeling and emotion.
‘And for this album, with these songs and these emotions, that makes Sì the perfect title. Sì?’ Andrea Bocelli concludes with a smile.
First published on Universal Music’s Klassik Akzente (www.klassikakzente.de).