Tony Bennett, who celebrated his 92nd birthday recently, has been friends with Diana Krall for over 20 years. Love Is Here To Stay marks their first full album project together. When they sing the music of the Gershwins, it’s truly the consummate artistic pairing of singers and songwriting. It’s one of those recordings that when you listen to it, you recognise instantly that it had to happen – it was just a matter of getting these two extraordinary performers into a studio and putting the Gershwin songbook in front of them, as Danny Bennett, the executive producer, explains.

The Gershwin Brothers, George (1898 – 1937) and his older brother, Ira (1896 – 1983), are often considered the greatest of the songwriting teams to make a permanent and indelible contribution to the art form known as ‘The Great American Songbook’ – and to world musical culture in general. The brothers were the children of Russian Jewish immigrants, both born in Brooklyn (and except for the occasional job in Hollywood, were lifelong New Yorkers) in 1898 and 1896, respectively. George was originally a piano prodigy and Ira showed an early gift for poetry, rhymes and wordplay. Writing mostly for Broadway shows and Hollywood musicals (and for top stars like Fred Astaire and Ethel Merman), the two brothers created dozens and dozens of the most beloved songs ever written, like ‘Let’s Call the Whole Thing Off’, ‘Embraceable You’, ‘The Man I Love’, and ‘But Not For Me’. The apogee of their working relationship was Porgy and Bess, the 1935 masterpiece that is virtually unchallenged as the greatest of all American operas (which features such iconic songs as ‘It Ain’t Necessarily So’ and ‘Summertime’).
Concurrently with the Gershwins’ musical theatre and film work, George attained great success in the concert arena as a piano virtuoso, conductor, and composer of such celebrated works as Rhapsody in Blue, An American in Paris, and the Concerto in F.
George wrote several important songs before he began working with Ira and, consequently, Ira kept on writing for decades after his younger brother’s tragically early death from a brain tumour at age 38, but the classic songs that they wrote together, from 1924 to 1937, are beloved by the entire world. George and Ira Gershwin will always be remembered as the songwriting team whose voice was synonymous with the sounds and style of the Jazz Age. 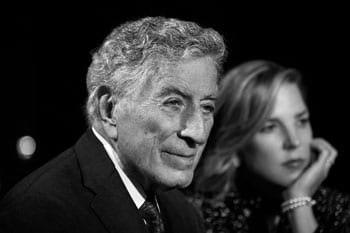 No one in popular American music has recorded for as long and at such a high level of excellence as Tony Bennett. In the last ten years alone, he has sold ten million records. The essence of his longevity and high artistic achievement was imbued in him in his loving childhood home in the Astoria section of Queens where he was born on 3 August 1926. As a teenager, Bennett sang while waiting tables and then enlisted in the Army during World War II. While in Europe he performed with military bands. Bennett’s big break came in 1949 when comedian Bob Hope noticed him working with Pearl Bailey in Greenwich Village in New York City.
Bennett is one of a handful of artists to have new albums charting in the 1950s, 60s, 70s, 80s, 90s, and now in the first two decades of the 21st century. He has introduced a multitude of songs into The Great American Songbook that have since become standards for popular music. With millions of records sold worldwide and platinum and gold albums to his credit, Bennett has received 19 GRAMMY Awards, including the GRAMMY Lifetime Achievement Award. He is also an Emmy Award Winner, a Kennedy Center Honoree, NEA Jazz Master and the first interpretive singer to receive The Library of Congress Gershwin Prize for Popular Song. Bennett accomplished painter, three of his works are in the permanent collection of the Smithsonian Institute, and he has authored four books…

Read more about Tony Bennett and Diana Krall as they celebrate the Gershwins by purchasing our October 2018 issue, or to continue supporting Creative Feel’s role in the arts and culture sector, subscribe to our monthly magazine.