Annie (Rose Byrne) runs a museum in the British seaside town she grew up in. This beautiful, free-spirited woman finds herself stuck in a long-term relationship with Duncan (Chris O’Dowd), who is a college lecturer. Duncan is an obsessive fan of obscure rocker Tucker Crowe (Ethan Hawke) and continues to be preoccupied with Crowe’s mysterious disappearance 25 years ago. 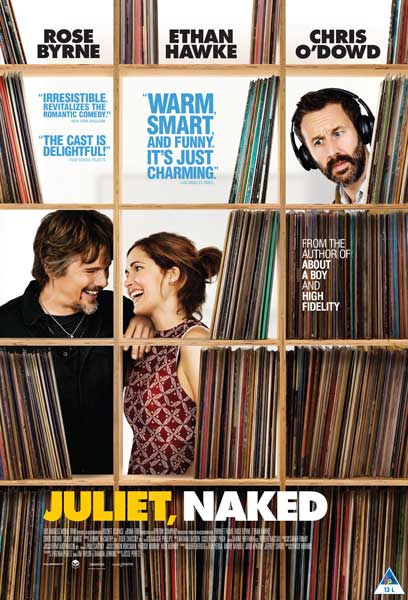 After walking away from his music career, Tucker Crowe disappeared from public view. He’s spent the subsequent wilderness years also walking away from several relationships and children. Now Tucker is living in his ex’s garage in New Jersey and co-parenting his youngest son Jackson (Azhy Robertson). His days consist of laundry, Lego and wondering why life hasn’t quite turned out as he expected.
When not lecturing about pop culture and the importance of the latest cult television drama, Duncan is founder and editor of the Tucker Crowe fan website. He and fellow Tucker obsessives pore over the obscure singer-songwriter’s limited discography for clues to the truth behind the music and disappearance.
When the acoustic demo of Tucker’s hit record “Juliet” from 25 years ago surfaces, Duncan writes a glowing review of the raw “Juliet, Naked” recordings. In a rebellious moment, Annie posts her own review, a scathing take down of tapes. To her surprise, Tucker enjoys Annie’s critique and emails to thank her. What follows is a life-changing encounter between a former star and the girlfriend of his biggest fan.
Starring Rose Byrne, Ethan Hawke and Chris O’Dowd Juliet, Naked is a comic account of life’s second chances, based on the novel by Nick Hornby (About a Boy, High Fidelity).
Juliet Naked releases in selected cinemas on 2 November 2018.