Chilahaebolae is a satirical play written and directed by Kgafela oa Magogodi showing at Soweto Theatre from 1 – 11 November 2018. 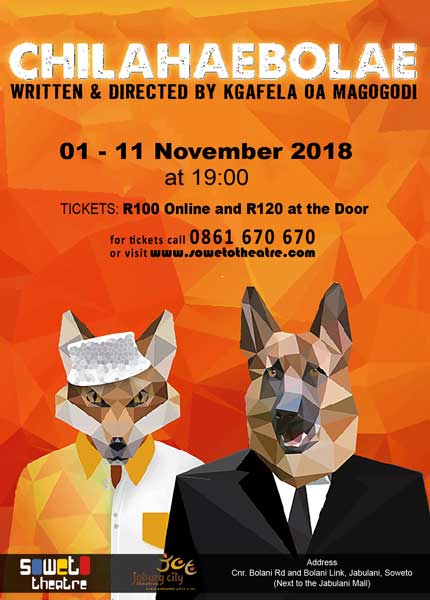 This allegory presents the world of Phokobje, the Jackal, who sets out in search of a long-lost friend Mpja, the dog. He soon discovers that things are not as they used to be. He finds that Mpja has cut ties with Nageng and is swimming in the fat of Chilahaebolae’s suburban bliss. Phokobje’s sudden appearance is an unwelcome interruption and an unpleasant reminder of Mpja’s betrayal. Phokobje’s refusal to comply with the ways of a world run by Motho further complicates matters. Cracks on the edifice of their brotherhood grow wider and deeper. Packed with adventure and laughter, Chilahaebolae is a thrilling theatrical experience which taps into the Basarwa tradition of subversive storytelling.
In Chilahaebolae the antics of animal proxies open a window into the neo-colonial set-up.
Oa Magogodi uses several languages in the play, including English, Setswana and Scamto/tsotsitaal.
His experimental work in stand-up poetry, spoken-word theatre, live music and essay-writing has found audiences across the country and the globe. His work has been translated into several languages including German, Dutch, French and Catalan.
He has worked extensively in the theatre, as a director and leader of spoken-word workshops that mix character development, storytelling, interpretive dance and political text.
Oa Magogodi’s approach to spoken word theatre took shape over a decade of experimental workshops in which he was casting and directing Wits University Drama School students, New York University students and an independent poetry group at North-West University.