To mark Krzysztof Penderecki’s eighty-fifth birthday Deutsche Grammophon is releasing a double album showcasing a number of the composer’s works for violin and piano or violin and orchestra. All of them feature the violinist Anne-Sophie Mutter, whose name is closely associated with that of Penderecki. 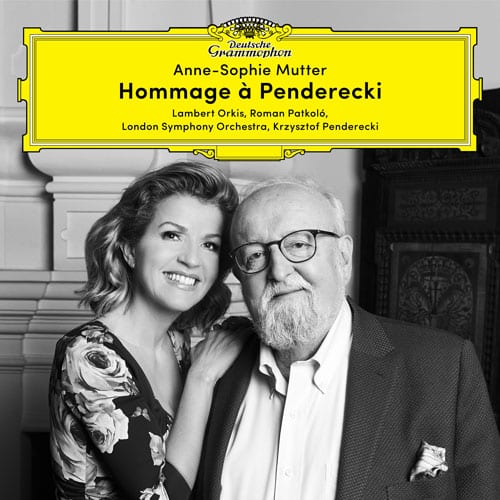 The violinist Anne-Sophie Mutter and the composer and conductor Krzysztof Penderecki are among the leading musical figures of our age. For more than 30 years, these two outstanding musicians have been close friends, and during that time their friendship has proved a fruitful one, repeatedly inspiring and challenging both parties. This very special double album features Mutter both as a soloist and in partnership with a number of colleagues. All the works that are included here reflect Penderecki’s unique musical language in fascinatingly intense and multifaceted ways. The result is a sensitive and moving homage on the part of the violinist to a musical friend.
They first got to know each other in the early 1980s, although it was not until 1988 that they began to work together closely. This was the year in which the then 25-year-old violinist played Prokofiev’s First Violin Concerto under Penderecki’s direction. From the outset, the conductor was fascinated by her musical maturity.
Penderecki’s works have an existential depth to them that goes far beyond the sheer sensuousness of the musical world that they inhabit. For the composer himself, these works are the end result of a creative process that is both tireless and extremely demanding. As he himself puts it: ‘I like travelling uncharted pathways. I have to do this whenever I compose, otherwise nothing comes out. I start somewhere in the middle of a work, before moving to the right or left and time and again having to get back on course, which often means retracing my steps. I continue to compose until it becomes clear to me that I could really do it much better. I then start at the beginning.’ Penderecki has retained this self-critical attitude right up to the present day. It is an attitude that places enormous demands on him. The works that have come into existence in this way afford impressive proof of his uncompromising dedication to music and provide thrilling evidence of his ability to explore the emotional extremes of human existence.

This double album brings together various pieces that Penderecki has written for the violin and that are performed by Mutter in ways that bring out their wealth of tone colours and captivating expressivity, while also striking a personal note. In addition to La Follia, a virtuoso set of variations for unaccompanied violin, and the dialogue-like concert duet for violin and double bass that Mutter has recorded with the bass player Roman Patkoló, it is two large-scale, complex works that are at the heart of the present release. Laid out along symphonic lines, the Second Violin Concerto – subtitled Metamorphosen – was premiered by Mutter in 1995: ‘For me, this task is physically and psychologically challenging, but it is a challenge that I am grateful to accept,’ says the violinist about the extremely demanding and contrastive work. Like the Second Violin Concerto, the Second Violin Sonata is dedicated to Mutter, who has recorded it for the present album with the pianist Lambert Orkis. The piece is in five movements and resembles a dramatic disquisition on life that ultimately leaves the listener emotionally moved.