Music and images are key features in Stompie Selibe’s works of art – most of which are concerned with a desire to discover the ‘unknown’ and the possibility to express, if not touch, that which resides in the remote realm of a human’s ‘inner being’.

What seems to be at the centre of Stompie Selibe’s quest is a creative investigation of mystery – he is after the potentiality of a curative wonderment. Stompie Selibe’s work sensibly speaks about healing through art, where the subjective undertaking of art-making is considered as an eternal mission necessary – not only to discover, but most importantly – to excavate and liberate the obscure interiority in the life experience of being human in the world.
The art of abstraction in the form of musical sounds and visual images seems to afford Selibe the expressive means to uncover human depths – tapping into those sensitive areas of unexplainable emotions or psychic energies. It is these energies that so many people find impossible to identify, comprehend or appreciate. Here, the ‘inner being’ and the ‘unknown’ perhaps reside in what Selibe calls the ‘sacred self’.
The challenge to tap into this ‘sacred self’ – what could be a repository of (unfamiliar though charged) emotional, psychic and intuitive attributes of being human – supposedly owing to the perversity of the violence, trauma and depression that most people experience in our overwhelmingly materialistic world – one which is never without tension, conflict and uproar. 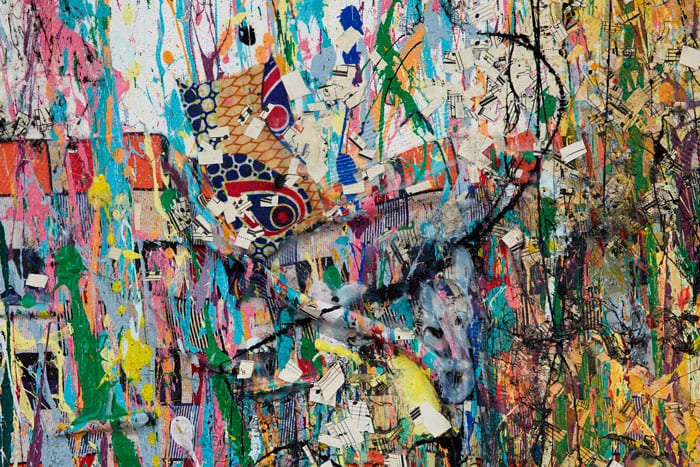 It would seem we live in a world absent of harmony, calm, amity or serenity, but certainly we are familiar with chaos, madness, clamour and pandemonium – the consequences of which include the impossibility to attend to our inner-selves, to listen to our internal beings, or to hear the whisper of our interior voices.
To hear Selibe speak about the ‘unknown’, the ‘inner being’, the ‘sacred self’ or ‘sacred transactions’ is encouraging, precisely because he reminds us of other subjects’ themes. And to look at his abstract artworks is also an important reminder that there are other creative procedures to engage society, to invite us into an abstract universe of different and novel visual content, form and character. For his art of abstraction affords us a minute into a world not populated by subjects, objects and places that are known or knowable.
Even if not persuasive enough, Selibe’s body of abstract artworks partakes in the curious search for a creative means to unearth and discover the ‘unknown’. In such an effort, his work brings into existence something fresh. His aspiration is not a definitive quest for originality or authenticity, but rather a potential mission premised on shifting perceptions – opening up unusual paths that might lead us to strange destinations where there await discoveries of unknown phenomena and experiences.
After many years of exploration and experimentation, Selibe has developed a resourceful method of ‘deconstructing and reconstructing musical sounds’ that are translated into visual constructs and forms. He pays close attention to his surroundings and allows his various senses to respond by absorbing and transmitting what he hears, sees, touches and feels into expressive imageries. Though we encounter these artworks in their externalised objecthood, they should be understood as imaginative expressions of his inner soul. For they speak to Selibe’s desires that are constitutive of an inextricable play between yearning and the need to express the inexpressible.

To read more about thoughts on Stompie Selibe’s art of abstraction purchase our September 2018 issue or continue supporting the arts and culture sector by subscribing to Creative Feel’s monthly magazine.