The second half consists of the debut performance of the dance production Katrina – The Dancing Language, by Coenie de Villiers, choreographed and performed by Kirvan Fortuin and company, with text by Ouma Katrina Esau. It is based on the life story of Katrina Esau, the last remaining fluent speaker of the San language N/UU.
Music by Coenie de Villiers. Choreography by Kirvan Fortuin. Text by Katrina Esau. An Artscape production in conjunction with CDV Market Ideation. Sponsored by Lowveld Agrochem. 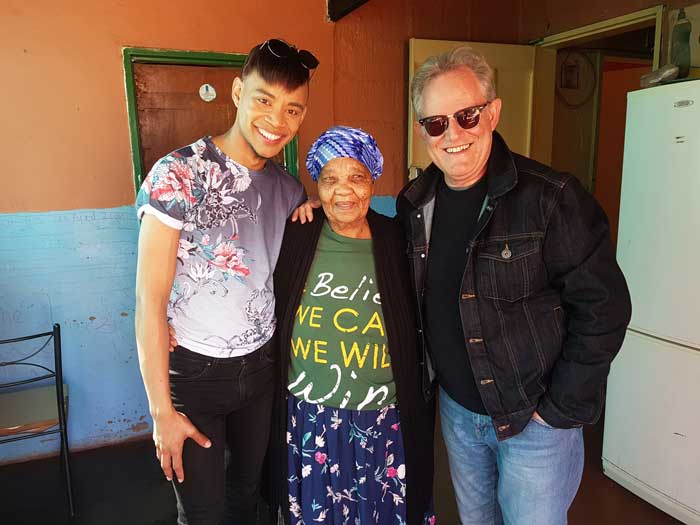 About Katrina
What happens when the last fluent speaker of an ancient language tells her unique story through the combined talents of two of South Africa’s most exciting creative artists, one an award-winning musician and the other one of South Africa’s most talented choreographers?
The result is simply magic.
This astounding journey started as a collaboration between two artists, and it is about to be brought to the stage as a flagship production by Artscape for their September Heritage programme.
The choreographer is the brilliant South-African and Dutch trained dancer-choreographer, Kirvan Fortuin. The composer is well-known singer-songwriter Coenie de Villiers, winner of three SAMA awards and the creator of 21 albums of his own material.
But the unique magic lies in the story-teller and her extraordinary tale.
Her name is Ouma Katrina Esau. She is 85 years old, and she is the last fluent speaker on earth of the ancient San language, N/UU (pronounced with a distinct click behind the teeth). Ouma Katrina hails from Upington on the seam of the Kalahari Desert, and her two sisters and brother also still speak the language. But for Ouma, it is her life’s passion. She even runs a modest home school for the township children in the afternoons where they can learn some basic N/UU.
De Villiers picks up the story: “I met Kirvan Fortuin at Artscape when we did a concert with many other artists on the bill. I was deeply impressed by his talent (I have two left feet!) and he in turn expressed concern that choreographers need more indigenous music to help create new works. Before the evening was out, we had agreed to collaborate.”
It was important for De Villiers and Fortuin to have a truly South African story to tell. “From the word go Kirvan and I were searching for the right story for our collaboration. I knew about Ouma Katrina, but only when I revisited her extraordinary story did the concept kick in,” says De Villiers. “I thought having Ouma Katrina telling her story in her own voice and in her own language would make for an incredible experience. I would attempt to create music to complement her tale, and this score would obviously have to work for Kirvan as choreographer as well – he had to translate Ouma’s story into dance. In addition, the audience could then follow the animated subtitles.”
Fortuin is enthusiastic about the project. “Coenie pitched the idea to me, and I immediately bought into the concept,” he says. “What could be more South African?” They brought the concept for consideration to Artscape (De Villiers had prior concert dates planned), and the theatre agreed to stage Katrina – The Dancing Language.
Both creators are extremely sensitive about the San community and the respect Ouma’s story deserves. “These are the original inhabitants of our country, and their languages predate all of our own,” says De Villiers. “We consulted widely with the San Board and explained that we could not possibly tell the San narrative in all of its complexity; we also do not have the mandate to do so. However, what we could attempt to do, was to try and tell a single individual’s story with all of the dignity and beauty that it deserves. We can only hope that this will pique interest in the wider community and all of its issues, including the brace of languages which are under threat.”
At the core of the production lies Ouma Katrina’s narrative, and it is told in seven “chapters”. She tells the story in her own voice, and in her own beloved language. For the music, De Villiers researched and consulted widely regarding indigenous and traditional instruments. “I received guidance from experts in the field,” he says. These traditional sounds infuse the contemporary score De Villiers created. “It’s a bit like Vangelis discovering his roots,” he smiles whilst trying to describe the sound.
Likewise, Kirvan Fortuin visited the Kalahari with De Villiers to research the ancient dance formats of the region. “We visited the community of the late Dawid Kruiper, where we were introduced to the dance by the descendants of this legendary leader. It was very important to understand the spiritual underpinnings of the dance, and the reverence with which it should be approached.” Fortuin’s choreography is rooted in a classical structure, and – using the traditional dance vocabulary – he creates a remarkable contemporary, urban feel.
As ethnographer and historian, Kirvan Fortuin is documenting his dance research as part of his post-graduate studies at UCT. All of the material collected and documented by Fortuin and De Villiers will be shared and released back to the San Archives.
The intellectual property of Ouma Katrina’s narrative itself remains her property through the San Board, and some of the initial deliverables from the production include a classroom cum library for the children of Ouma’s small school, courtesy of AVBOB. The school will soon be moving to new premises, and one of the production sponsors, Lowveld Agrochem, will create a sustainable vegetable garden for the children and support the school by virtue of a nutritious feeding plan.
De Villiers and Fortuin agree: “It has been an incredibly humbling journey. When we started our collaborative journey, we never realised how much Ouma would touch our lives. We hope that the production will not only enable audiences to hear the sound of her language, but also help them to experience the warmth of her heart. We think it will be a legacy that will honour her and her community.” They are keen to share their joint vision of the project: “Of course we hope that audiences will enjoy our creative vision and execution of this remarkable story,” they enthuse.
“We think Katrina – The Dancing Language will be great entertainment,” says De Villiers and Fortuin. “The seamless blend of narrative, music and dance is uniquely South African, and sounds and looks like nothing we have seen on stage.” All of this with twenty dancers on stage. 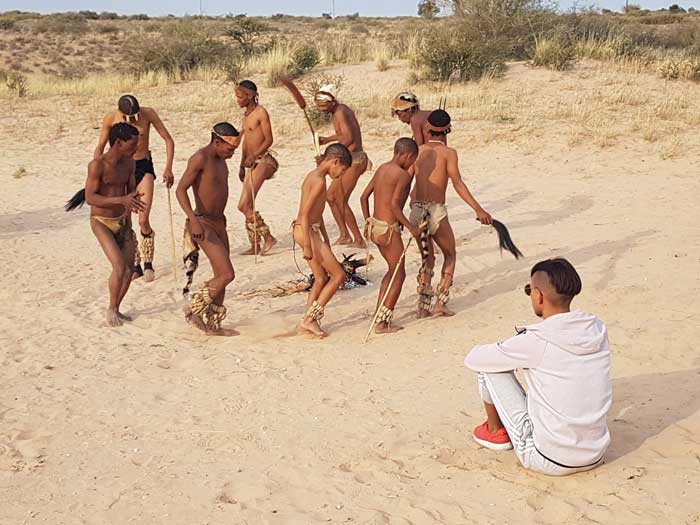 About Karoo Suite
The first half of the evening consists of De Villiers and world-famous thriller writer Deon Meyer performing their box-office hit, the Karoo Suite. The work consists of stories from the Karoo told by Meyer as the writer and narrator, with De Villiers and the band performing his music to complement the text and photography by Meyer; the latter creates an atmospheric backdrop to the presentation. Some of South Africa’s best musicians make up the band: Jaconell Mouton on keyboards, David Klassen on percussion and legendary guitarist Mauritz Lotz join De Villiers behind the piano in the first Cape Town proper performance of this, the show that wowed the country.