Towards the end of July in Johannesburg’s Maboneng Precinct, Hennessy presented to us urban art phenomenon, Alexandre Farto – aka ‘Vhils’, whom they collaborated with for the 2018 Very Special Limited Edition bottle design. As part of his worldwide tour with Hennessy to celebrate the collaboration he brought to life a portrait of an icon. It all took shape on the side of the multi-storeyed building. The image was not applied to the wall, it was brought to life, piece-by-piece, using hammers, chisels, and drills to carve away at its façade. The portrait is of singer-songwriter Yvonne Chaka Chaka and the artist behind it is none other than Vhils. 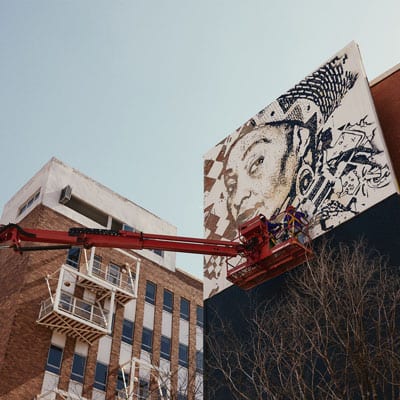 Born in Portugal, Vhils is an internationally renowned artist who is best known for his inventive take on street art – creating arresting portraits and images on old walls and buildings through carving, drilling, chipping, and even the occasional bit of explosive etching. He’s down in Johannesburg for the third instalment of a series of portraits he’s doing in collaboration with the world’s best-selling cognac, Hennessy, under the collective title ‘Make the Invisible Visible’. The project, which comes after the design of a signature bottle for Hennessy’s Very Special Limited Edition, involves a series of mural installations in cities across the globe, each one a tribute to a local icon who’s pushing boundaries in their field.
On-site at The Cosmopolitan building, Vhils – real name Alexandre Manuel Dias Farto – is taking a break. He’s tired, but he’s happy with the progress he and his team are making on the wall. Having already completed murals of TJ Mizell and Joe Fresh in New York and Chicago respectively, Yvonne Chaka Chaka is the icon he’s chosen to represent during his South African stop, and already, a striking portrait of her is beginning to take shape. 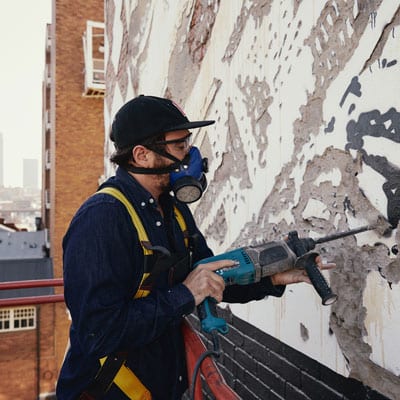 Chaka Chaka, who is popularly known as the Princess of Africa, is a singer, songwriter, entrepreneur and humanitarian who’s become known across the world for both her music and her commitment to community and social charity work. Born in Soweto, she started singing at the age of 19 and soon become a pop and dance icon.
‘I wanted someone who was known for really pushing the boundaries,’ says Vhils on his decision to portray Chaka Chaka. ‘Someone who has never stopped pushing the limits or the expectations that people have put on them in terms of creativity.’
Vhils explains his process of sketching out a design from a series of images, narrowing it down to a duotone image, and tracing it onto the wall before beginning to chip away at the building in order to bring the portrait to life. But how did Vhils start working with such an innovative technique?
‘Since I was 12 or 13, I’ve been into graffiti,’ he explains. ‘I was born in Lisbon in the late ‘80s, but I grew up seeing a lot of the murals that were created during the revolution we had in ‘74. Eventually, advertisers covered the murals, followed by graffiti. Then the council painted everything white, which, of course, became covered with more graffiti. By watching the city change like this, I realised that the walls themselves were holding stories. It was like the city was growing fatter over the years, condensing all this information that was kind of forgotten inside those walls.’ 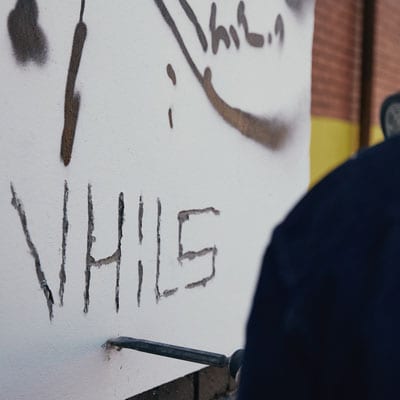 Through scratching at the surface, peeling back these layers and chipping away at what lies beneath, Vhils is essentially creating a narrative that’s born from, and also celebrates, the many stories that came before.
‘Here we are making the invisible visible by uncovering a portrait of someone – paying homage to their work and their contributions… it’s all about highlighting the histories visually and going beyond the surface.’
Through the collaboration with Hennessy, he’s able to take his craft to places across the globe. Vhils is the latest in a string of renowned artists who’ve partnered with Hennessy Very Special. Over the past few years the brand has partnered with world-renowned street artist Shepard Fairey; graffiti artist Futura; Harlem-born, internationally renowned graffiti artist JonOne; and tattooist and visual artist Scott Campbell.
‘I’ve known about the history of their collaborations and the artists they’ve worked with in the past,’ explains Vhils. ‘So I was really honoured just to be asked to take part.’
The new portrait of Chaka Chaka takes the place of a mural of Jan van Riebeeck done by American artist Gaia and SA-based Freddy Sam and looks out over The Cosmopolitan into Maboneng and beyond. Stepping outside again, Vhils looks up at the work.
‘It’s still an ongoing dialogue, you know? Because I have an image in my mind of what it’s going to be, but you never know how it’ll end up looking,’ he explains. ‘It’s really a dialogue between me, the wall, and the many layers.’