Following a sensational national tour and international debut, the runaway success Die Reuk Van Appels celebrates its incredible 100th performance as part of its next Cape Town run. The multiple award-winning play will be presented from 23 October until 17 November at The Fugard Studio Theatre and is performed in Afrikaans with English surtitles.

Die Reuk Van Appels is the acclaimed 1993 debut novel of South African author Mark Behr. Presented by Theatrerocket Productions and adapted for the stage by Johann Smith, it stars Gideon Lombard (…miskien, The View, Special Thanks to Guests from Afar, Orpheus in Africa, Suidooster), and is directed by Lara Bye (Yellowman, London Road, Oscar en die Pienk Tannie, Vaslav).
Since the production’s premiere at the Klein Karoo Nasionale Kunstefees (KKNK) last year, it has received almost twenty awards and nominations. Among these are Best Actor at KKNK, as well as Best Actor in a Solo Performance at all three of the major South African awards – the Fleur du Cap Theatre Awards, Naledi Theatre Awards and kykNET Fiësta Awards (2018).
Director Lara Bye won the Best Director kykNET Fiësta Award; playwright Johann Smith won the award for Best Adaption of an Existing Work while the production was awarded the coveted Best Overall Production of the Year. The production celebrates its incredible 100th performance on 3 November during The Fugard Studio Theatre run. 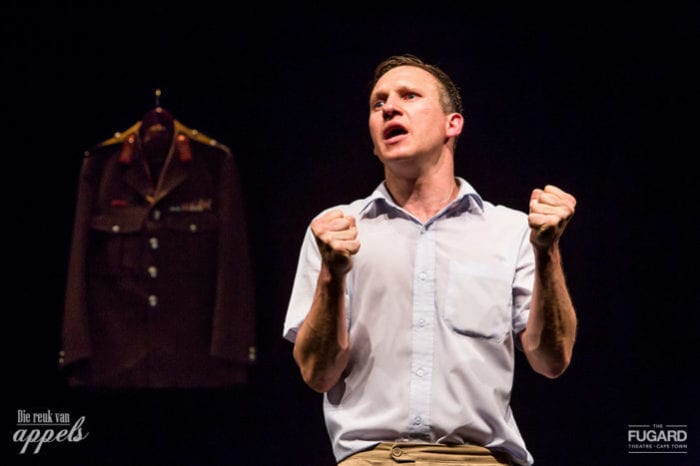 Die Reuk Van Appels is the coming-of-age story of Marnus Erasmus, 11-year-old son of a South African Defence Force (SADF) general. It eloquently captures the Afrikaner mentality in the late 1970s and early 1980s and the brutal consequences of apartheid and militarisation of South African life.
Upon publication and subsequent translation into English (as The Smell of Apples) that same year, this landmark Afrikaans novel catapulted Behr into the ranks of young and talented dissident voices such as Etienne van Heerden and Koos Prinsloo (Tony Eprile, New York Times). Before his untimely death on 27 November 2015, Behr was a professor of creative writing at Rhodes College in Memphis, Tennessee. With the success of the stage adaption, new interest has been generated about the novel, and the publishers have decided to print another impression of Die reuk van appels.
“We have been overwhelmed and humbled by the critical acclaim, awards recognition and responses from our audiences,” says Johan van der Merwe, co-founder of Theatrerocket Productions. “We are delighted to be bringing this powerful, seminal work back to Cape Town for a return run at The Fugard Studio Theatre.”
Adapted from the book by Johann Smith, Lighting Design for the play is by Kosie Smit with Gideon Lombard, also a talented musician, responsible for the Sound Design.
There is an age restriction of 16 (sex, nudity, strong language, violence and prejudice)
Die Reuk Van Appels will run at the Fugard Studio Theatre from 23 October to 17 November, Tuesdays to Saturdays at 8pm with a 3pm matinee performance on Saturdays.  Tickets range from R130 to R165 and can be booked directly through the Fugard Theatre box office on 021 461 4554 or online at www.thefugard.com
Visit the cosy ground-floor bar for a before and after show drink and delicious snacks. If the weather plays along, enjoy the panoramic city views from the Fugard Theatre’s fantastic rooftop bar.
There is secure parking for a small fee directly opposite the Fugard Theatre in Harrington Square.