South Africa’s “king of farce”, Tobie Cronjé was awarded the Chancellor’s Medal at the University of Pretoria’s (UP’s) Faculty of Humanities graduation ceremony on 5 September, for his contribution to the arts. 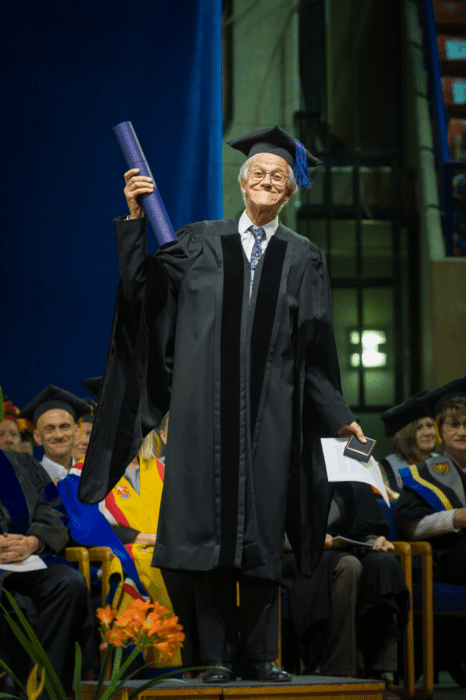 Tobias Jurgens Cronjé was born in 1948 in Germiston, matriculating at Vryburger Hoër in Primrose. He crafted an illustrious career in the performing arts spanning over four decades. His directing and performances in stage productions alone (excluding film and television work) total over 100 in number.
Mr Cronjé taught music students in Kathlehong in the late 1960s. He obtained his drama degree in 1976 from UP and was offered his first professional role at the Performing Arts Council of Transvaal (PACT) as a pianist in the theatre production, The Fantastics (1972).
He has enchanted audiences with his television and film performances in roles such as that of Constable Tobie Treurnicht in the film Die Sersant en die Tiger Moth (1973); Willem in the 1976 TV series with the same title; Kootjie in the film Kootjie Emmer (1977); Josef in the 1983 series Koöperasiestories; Nunsence (1989) and Andries Bester in SABC 2’s Onder draai die duiwel rond (1998; 2001).
He also starred in Brickhill-Burke’s production of the Broadway hit, I Love my Wife, Pyjama Tops (1979-1980) that toured nationally and internationally and in the international film, Inside Out (1989). In recent years, he has played the role of the Dame for Janice Honeyman in numerous pantomimes; starred in the TV soapie Binnelanders (Seasons 5-8); the TV series Amalia (2005); shows such as My Fat Friend (2014-2016); and in films such as Promised Land, Die spook van Uniondale, The Chemo Club and Die Rebellie van Lafras Verwey.
Mr Cronjé has been the recipient of several nominations and awards during the course of his career. Among others, he received the Gallo award for best actor in a musical comedy for I love my Wife (1982); the Rapport Oscar award for best supporting actor in Herfsland (1986); the Dalro award for best supporting actor in Rough Crossing (1988); a Naledi Lifetime achievement award (2009); and a Lifetime Achievement Award from Kunste Onbeperk (2018).
Mr Cronjé has distinguished himself in the performing arts and is a giant in the local performing arts industry.
Prof Vasu Reddy, Dean of the Faculty of Humanities said: “Tobie Cronjé is a unique icon in South Africa’s rich performing arts heritage. What better way to honour his contributions to South African film, television and stage than during Heritage month. The Faculty of Humanities through the University of Pretoria is honoured to bestow this accolade on Cronjé, our alumnus. UP is proud to acknowledge that Cronjé’s achievements are manifold as a stage personality who works with many formats, including comedy, pantomime and cross dressing. He is a gentle giant of South Africa’s stage.”
Delighted about receiving the Chancellor’s Award, Mr Cronjé said “this is an unbelievable honour. I was never an academic person and I feel emotional about the award. I am very grateful. It feels fantastic.”
Having fond memories of UP, he recalls his drama lecturer, Neels Hansen allowing students to build sets through the night. “Neels was working on the set of Madam Butterfly and let us build the trees through the night in a workshop in the Aula. We had to fill the trees with cherry blossoms. We had fun,” he laughed.
Another academic, Prof Anna Pohl “was very strict but used to make us laugh. She tried to teach us that being in drama is always fun”.
He said being involved in comedy often entails “laughter from the audience coming in like waves and the energy envelops you. The fact that the audience is enjoying themselves is wonderful.”
His advice to drama students is to “make sure you have enough passion and work as hard as you can”.