Langarm, the latest musical created by the award-winning David Kramer, will be presented at the Fugard Theatre for the festive season from 20 November.

Produced and presented by Eric Abraham for the Fugard Theatre, Langarm is a story of love and intrigue set in the story-world of Cape Town’s ballroom dance culture in the 1960s. With the threat of the new apartheid laws hanging over their heads, people will do almost anything to survive.
In 1965 when Dinah Levin is widowed, she invites her nephew Jeff whose fiancé has just dumped him to help her manage her late husband’s Canterbury Hotel. Here he meets the lovely, young ballroom dancer Angelina, and when she asks him to partner her in The Swaziland Ballroom Championships, he sees it as an opportunity to humiliate his ex. Aware that he’ll risk arrest by flouting the law, he throws caution to the wind and agrees.
Jeff decides to rejuvenate the hotel by offering langarm dances. When Eddie Jephta  the leader of the Moonlight Serenaders langarm band comes to play at The Canterbury Hotel, Dinah has to confront the secrets of her past. 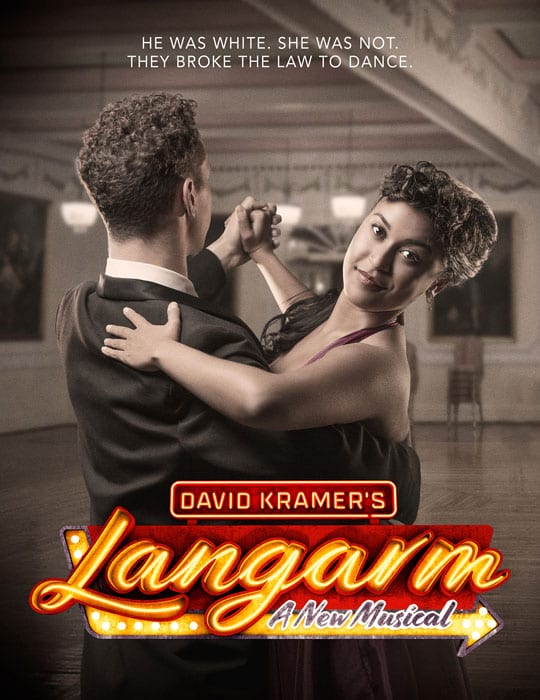 He was white. She was not. They broke the law to dance.
“I have been wanting for many years to do a musical inspired by the langarm-ballroom bands from this time,” says David Kramer. “I grew up watching my parents dancing to the music of these bands, and Langarm pays homage to the likes of the Johnny Lyners Blue Moon Jazz Band and Willie’s Starlite Orchestra.”
“We are proud to be collaborating on our fifth production with David Kramer following the success of District Six – Kanala, Orpheus in Africa, Blood Brothers and Kat and the Kings,” says Daniel Galloway, Executive Director of the Fugard Theatre.
Langarm is written and directed by David Kramer.
The stellar creative team includes Musical Arrangements by Resident Musical Director of the Fugard Theatre Charl-Johan Lingenfelder (West Side Story, King Kong, Funny Girl). Set Design is by Saul Radomsky (The Road to Mecca, Clybourne Park, District Six – Kanala), Costume Design is by Widaad Albertus (Significant Other, The Demon Bride, The Eulogists) and Choreography is by Grant van Ster (Aunty Merle the Musical, Calling Us Home, Figure of Eight Dance Collective).
Langarm will be performed at the Fugard Theatre from 20 November from Tuesdays to Saturdays at 20:00 with a matinee performance on Saturdays at 15:00. From Sunday 16 December, there will be an additional Sunday matinee at 15:00. There will be a Monday night performance at 20:00 on New Year’s Eve, 31 December 2018 also at 20:00.
Tickets ranging from R150 to R260 can be booked through the Fugard Theatre box office on 021 461 4554 or through the Fugard Theatre’s website at www.thefugard.com. There is a 15% discount available for the Friends of The Fugard members.
Harrington Street car park is located at the corner of Caledon and Harrington streets and is available for the use of theatre patrons for a small parking fee. Visit the cosy ground-floor bar, which opens two hours before all scheduled show times and stays open until last rounds are called… often as late as 1am. And if the weather is fine the bar on the fantastic rooftop terrace is opened, with its panoramic views of the city. Both bars offer a range of wines from some of the Cape’s top estates.