Cirque Infernal’s theatrical circus tale Mortalès, will show at the Mandela Stage of the Joburg Theatre from 6 to 23 September 2018. The show has shocked and astounded audiences around the world.

Cirque Infernal was created by Danny Varanne in the mid-1990s. A gothic lover who grew up in the entertainment world, Varanne developed his appreciation for visual arts from his favourite movies, circus stories, and personal experiences. He put all of these elements into a blender, and Cirque Infernal was created.
Born and raised in a traditional family of travelling performers, Varanne started as a showman at a very young age in his parents’ burlesque theatre. Then, with his brothers, Varanne started a motorcycle daredevil show. They toured the world and became internationally acclaimed for their skills. By the year 2000, the three brothers went their separate ways, each one following a new path. 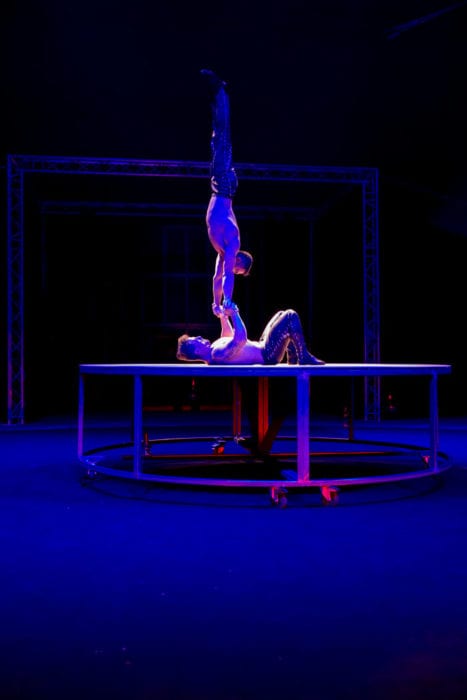 Varanne maintained the daredevil show, realising almost all of his dreams. In 2012, he received two awards at the prestigious Festival International Du Cirque De Monte-Carlo, and an official Guinness World Record. After this, it was time for something new, the development of his oldest and fondest dream: Cirque Infernal. Having spent two years searching around the world for the artists to work with his project, Varanne is now ready to present Cirque Infernal to the world. Mortalès is the first production created by Cirque Infernal.
The story of a circus performer, Mortalès is set in Europe in the middle ages. A troupe of tightrope walkers perform in a village on a windy day. The weather is dangerous. The daredevil shouldn’t mount the high wire, but it’s the only work his family has known for generations. As the funambulist starts to stride across the wire, a gust of wind strikes, causing him to plummet to his untimely demise. Finding himself face-to-face with Death, Death and the performer strike a deal: the performer comes back to life but in order to stay alive he must complete the show and avoid the messengers sent by Death. He is guided along the way by the Angeliques; the angels.
The show tells the journey of the funambulist pursuing his goal. Will he succeed and earn the ultimate title of daredevil?
The show takes place on the Mandela Stage of the Joburg Theatre from 6 to 23 September 2018.
For tickets book online at www.joburgtheatre.com or call 0861 670 670.
Discounts available for students, pensioners and Groups of 10+. Special family packages available.
Age restriction: 5+

To read more about some of the world’s top circus performers purchase our August 2018 issue, or to continue supporting Creative Feel‘s role in the arts and culture sector subscribe to our monthly magazine in digital or print format.