Putting art out into the world is always daunting. And it never gets easy – especially for artists who are constantly pushing their practice to new limits and taking risks. As Jemma Kahn’s The Borrow Pit showed at this year’s National Arts Festival, with risk often comes substantial reward. 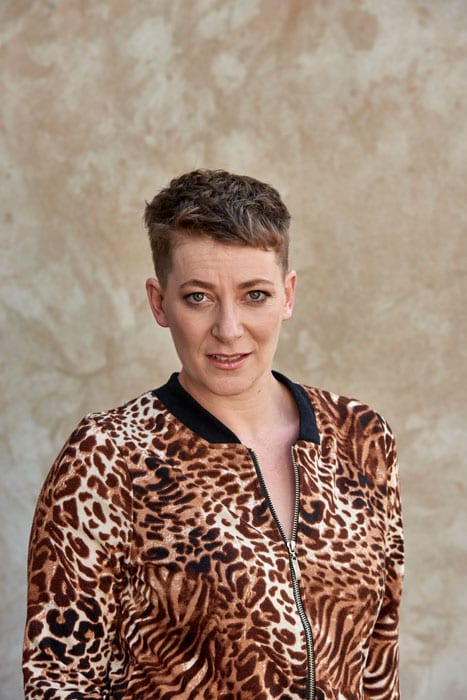 With the title of 2018 Standard Bank Young Artist for Theatre now glittering before her name, the pressure was on for Jemma Kahn at the 2018 National Arts Festival (NAF) in Makhanda. The safe route, she was advised, would be to use a pre-existing script, one that would be a commercial success, but when is ‘safe’ ever memorable? ‘Throwing caution to the wind’, she chose to start from scratch – ‘and I am not a writer,’ she says.
The outcome, The Borrow Pit, was inspired by a YouTube video, a dinner party conversation and ‘a word my dad taught me’. ‘One night I was having dinner at a friend’s house,’ she says. ‘Another woman at the table, a portrait painter, told us the creepiest story about Francis Bacon, the famous British painter who for many years had intrigued me. The following day I was in a bookshop and I found a rare copy of his biography. That seemed fortuitous.’

With The Borrow Pit I, like my subjects, am throwing caution to the wind. I’m scared

The Borrow Pit, a kamishibai play in Kahn’s signature style, is loosely based on the lives of British painters Francis Bacon, Lucian Freud and Bacon’s lover, George Dyer.
Bacon and Dyer met in 1966 in London and started a relationship. Bacon was already a prolific painter and public figure. Dyer, several years Bacon’s junior, was a good-looking criminal who had never been in a gay relationship before. Bacon liked to drink heavily, gamble, get into fights and he liked his lovers to rough him up. Bacon was a masochist but, unfortunately, Dyer was not a sadist. So Dyer’s tender love (inexplicable and frightening to himself) was intolerable to Bacon. Their relationship was a tumultuous one, fueled by lots of booze on both sides. A tragic quote: ‘Being the artist’s “friend” – George played down the sexual connection – provided him with enough money to keep himself and a variety of hangers-on more or less permanently drunk.’

As Bacon distanced himself, Dyer, heartbroken, went to seek the counsel of Bacon’s friend Lucian Freud. Freud, like Bacon, was that kind of bohemian posh that means he lived in rambling squalor and had weird relationships with his female children. Bacon and Freud were enfants terribles, painting figuratively throughout the 20th century despite portraiture being unfashionable.
Freud painted Dyer’s portrait. To sit for a portrait by Freud was a lengthy commitment of months, even years sometimes. They must have spoken about Bacon a lot, or, perhaps, not at all since Freud was famously mercurial. ‘George got very depressed,’ Freud said. ‘He came and stayed with me in Paddington for a while, and I painted him. In the end, of course, he killed himself.’ Dyer died of an overdose in a Paris hotel room in 1971. Two days later, a large retrospective of Bacon’s work opened in at La Grande Palais, Paris. Many of the paintings on the show were of Dyer. The Borrow Pit thus poses the questions: Is art more important than people? Are the paintings of Dyer by Freud and Bacon more valuable than he was himself?

Speaking six weeks before the piece debuted at the NAF, Kahn contrasted herself with Freud and Bacon. In both their lives and their works, the two British painters were risk takers to the core. Kahn, on the other hand, is not a risk taker by nature, she says. ‘There has not been too much risk involved with any of my productions. They have been small and cheap and meticulously planned. Sure, one always runs the risk of a play falling flat, but I have been sensible and mitigated as best I could. Until now. With The Borrow Pit I, like my subjects, am throwing caution to the wind. I’m scared.
‘This play might puncture my career. People might say, “She bit off more than she could chew” or, “Why did she make a play about dead British portrait painters” or, “I didn’t understand it” or, “It was hysterical” or, “It was sentimental” or, worse, “It was boring.” Worst of all I imagine my collaborators whispering behind my back, “Shame, she really fucked it up…”
‘BUT. It feels absolutely right that the subject matter of this play be dealt with in a risky way. So that’s what I’m doing. I’m taking a risk.’
Oh, and it truly paid off. The Borrow Pit was an incredible commercial success, with shows selling out quickly. Critics raved about it, calling it ‘a truly memorable theatre experience’, and commending Kahn for continuing on the same artistic path that has led to her success.