Sunny skies, year-round warm days and nights accompanied by fun-filled beach activities, musical concerts, exciting nightlife and adrenaline-filled activities, are a sign that you have finally arrived at one of the Top 52 must-visit destinations in 2018. This is one of the most recent accolades that the city of Durban has received from Fodor’s Travel – a US-based tourism publication. Durban continues to attract both local and international visitors to the city and keep them entertained.

Part of the visitor strategy that Durban focuses on is to grow the city’s brand in key source markets by leveraging off the city’s infrastructure and our experience in hosting both local and international visitors. This was emphasised through the launch of the Discover Durban – #durbanhasmore campaign in November 2017. The campaign seeks to unpack the hidden tourism gems in Durban and the KwaZulu-Natal (KZN) province. The city of Durban aims to showcase its products while promoting domestic tourism, and encouraging South African citizens and expatriates to visit this local destination.
Tourism remains one of the fastest growing branches of the economy. It is central to job creation, youth employment and creates various economic opportunities. Tourism is estimated to bring in 30% of KZN’s GDP and is one of the major job creators in the province. The city of Durban has invested over R7.6 billion towards capital infrastructure development and tourism-related programmes aimed at promoting destinations and attractions. Currently, 3.8 million tourists visit Durban, generating over R19.7 billion towards Durban’s GDP contribution and supporting 41 000 jobs. 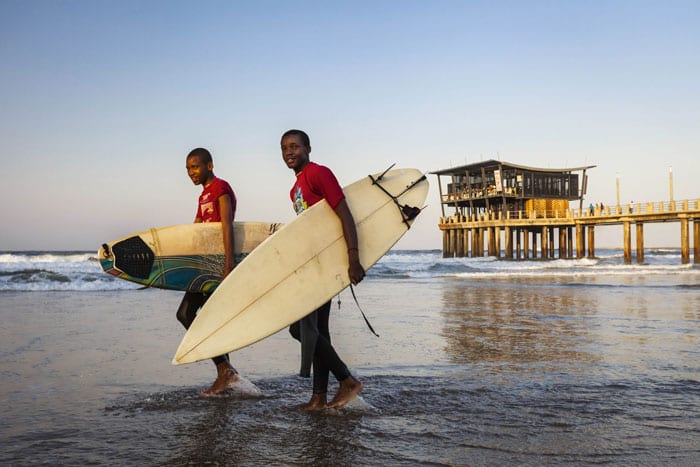 The city has proven time and time again that it is the destination for international sports and events. The city has played host to major international events and conferences including, but not limited to, NAM Summit, COP 17, BRICS, HICA and the 13th International Aids Conference, and has been awarded the Tourism Indaba for the next five years. Indaba is one of the premier tourism platforms and discusses the growth and economic development of our tourism industry. It is expected to generate an estimated R500 million in economic impact for the city and province over the next five years. In 2016/17, the Indaba attracted 18 500 visitors with an economic contribution of R 26.2 million.
In celebrating the Mandela centenary, Durban’s emphasis is on guided tours to the popular Woza eNanda Heritage Route in Inanda. Inanda is of importance as it is where the late, former president Nelson Mandela chose to vote in South Africa’s first democratic elections in 1994. This is now an opportune moment for people to visit Inanda and commemorate his life. The guided tour visits Gandhi’s settlement in Phoenix, the Mandela voting site, Dr JL Dube’s house and Inanda Seminary.

To read more about what to discover in Durban, the beachfront and ocean, a magical world of sea and marine life, adventure walks, Zulu culture, township tours and more, purchase our August 2018 issue, or to support our role in the arts and culture sector, subscribe to our monthly print or digital magazine.