Thuso Mbedu’s expeditious acting career has seen her become one of South Africa’s top actresses. A familiar face to many, she has graced our television screens since 2014 and recently made it into the 2018 Forbes Africa Under 30 list. Mbedu graciously gave Creative Feel’s Tshepang Ralekgari a moment of her time to chat about her journey so far.

Life has not always been all glitz and glamour for Thuso Mbedu. Growing up, this beautiful actress battled with skin problems, which fuelled her goal to become a dermatologist. But life led her down a different path. In grade 10, she wrote, directed and starred in a school production; the play received a standing ovation. Mbedu fell in love with the art of acting.
At times, one needs some form of inspiration in order to succeed in what we want to accomplish. ‘In terms of those that inspire me to be better, it is not actually one person; it is a number of people around me and in my circle,’ says Mbedu. ‘I also draw inspiration from various well-known people, of which some are not specific to acting or my craft.’ 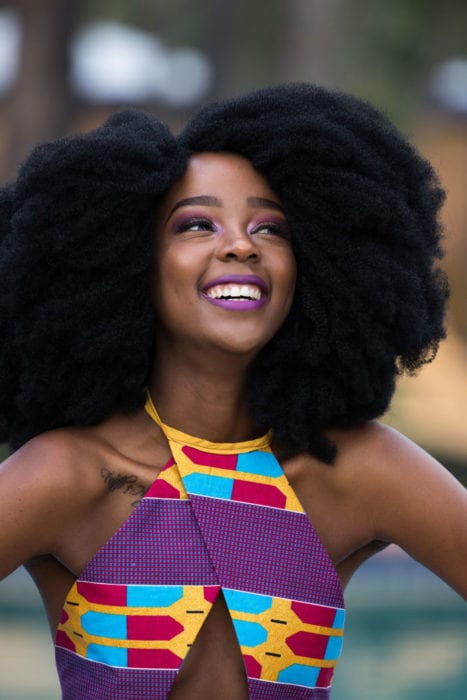 Mbedu’s breakout role was in Is’thunzi, a role that she says was a challenge and allowed her to showcase what she is capable of. Another project that is of great significance and a source of pride for Mbedu is iDrive, a crime action drama series that she wrote. While she has managed to shoot the pilot and get the ball rolling on the project, she says that she needs ‘more funding so that I can bring it to your television screens. To be able to create content and see it come to life and be supported by industry colleagues is amazing.’
Growth comes with hard work, and every successful journey has challenges one has to overcome. Though Mbedu experienced many of these such challenges, she pushed forward in pursuit of what she is passionate about. Having graduated with an Honours Degree cum laude from the University of the Witwatersrand, she says, ‘The journey beyond university was difficult. I left home in 2014 with no financial backing and I couch-surfed at my friend’s place while I auditioned and hoped to acquire my first job. When a close aunt of mine departed this life – having played a major role in assisting our grandmother with raising us – three days before my graduation ceremony; sadly I could not go back home for her funeral. My sister was able to arrive in the morning and leave immediately after the graduation ceremony.
To read more about Thuso Mbedu, the star that continues to shine, purchase our July 2018 issue or continue supporting the arts and culture sector by subscribing to our monthly Creative Feel magazine.