The mystic-philosopher-painter, the French-born South African based artist, Elsa Duault, has introduced a rich vein of thought and feeling into our art world. Running against the dominant interest, domestically and globally, in narrative-driven art, that is, art shaped by the consuming fixation with a raced or gendered identity politics, Duault has provided us with a more esoteric or gnomic set of concerns. 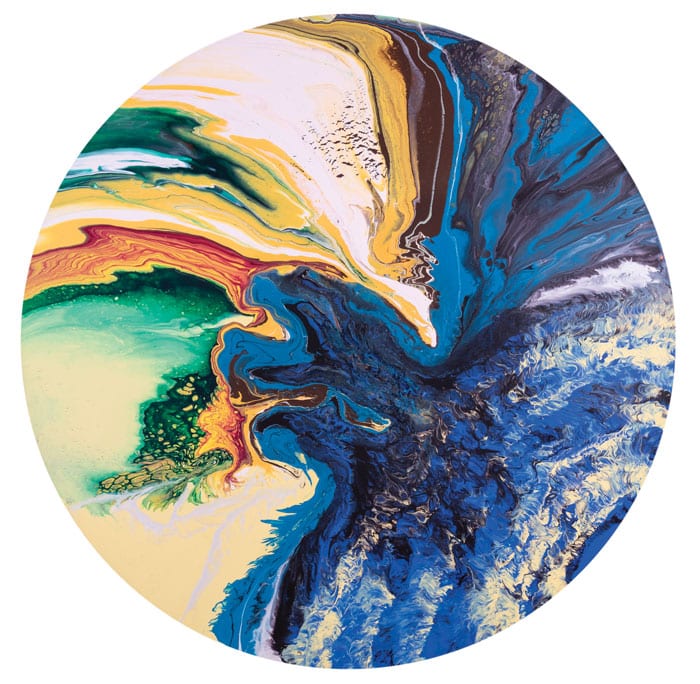 Duault’s ‘credo’, she says, is defined by ‘the Great All’, a belief in the eternal circularity of life in which ‘nothing is created, nothing lost, everything transformed’. This vision, or credo, deserves closer attention, for what Duault believes in is not the customary monotheistic absolute, shared by Christianity, Judaism, and Islam, but, rather, a belief in an organically self-creating – and perpetually transforming – world in which neither a sovereign God nor a self-possessed artist is ever wholly in control of creation.
In freeing herself from self-control and from the reliance upon the absolute, Duault opens up a very different understanding of creation. It is perhaps fitting, as a French woman, that Duault should echo the visions of the molecular theorists, Félix Guattari and Gilles Deleuze, as well as the philosopher of movement and author of Creative Evolution, Henri Bergson. For, like Duault, these three thinkers, and Bergson in particular, advocate the notion of an ‘Open Whole’, that is, the vision of a ceaselessly morphing totality. This vision is evident in the artist’s recognition of ‘mother nature’s balances and harmony’ which, all importantly, is ‘full of surprises and beautiful expressions’.

This unknowable realm, which precedes and exceeds the fetish and obsession of the human today – its beleaguered subjective consciousness and fraught agency – is not, however, something to be afraid of. On the contrary, it is this primal mystery – the very mystery of the natural world – which, for Duault, will offer us a greater calm, a greater peace – a greater All. 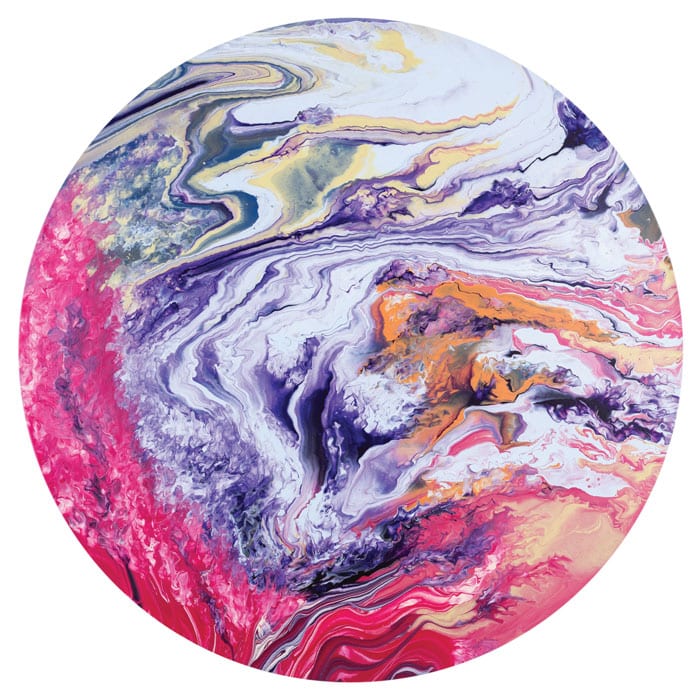 In Duault’s world, therefore, nothing is given, and yet everything is given. One cannot underestimate the centrality of this paradox in the artist’s painting. Her surfaces and framing form for her work are circular. This refusal, structurally, of a four-cornered world, affirms the artist’s commitment to an eternal, never-ending, geometry, for the circle, more than any other form, attests not closure but infinity.
Working in acrylic paint, the artist operates by creating three densities – three plastic containers of paint, in different colours, which vary in their thinness and thickness. The first layer, spilt on the canvas, is the most thinly pliable. Duault then varies the density, manipulating the paint by breathing upon and against it through a straw, or by shifting it about with a stick or blow dryer. What is immediately evident is that no paintbrush is used.
To read more on Ashraf Jamal‘s The Great All: An essay on Elsa Duault, purchase our July 2018 issue, or continue supporting the arts and culture sector by subscribing to our monthly Creative Feel magazine.