On 31 January this year, the musical The Color Purple premiered in South Africa on The Nelson Mandela stage at Joburg Theatre, with an all South African cast.

During its first run, the South African production of this Tony and GRAMMY Award-winning musical wowed audiences. For the talented cast members, this journey has been a career highlight.
Theatre journalists and audience members raved about the Janice-Honeyman-directed production. Due to public demand for hard-to-come-by tickets, Joburg Theatre and Executive Producer Bernard Jay have announced that the show would give 32 additional performances during Women’s Month in August 2018. The 31 000 additional tickets are already selling quickly.
As arts journalist Leon van Nierop stated in his review of the show: ‘This was a life-changing and sweeping experience that will go down as one of the best and most thought-provoking of the past few years… a brilliant and touching production… This is a once-in-a-lifetime experience… You will never forget it.’
Seventeen of the original 20 cast members have signed on to reprise their roles, including acclaimed performers Didintle Khunou as Celie and Aubrey Poo as Mister. To find the three necessary replacement cast members, Janice Honeyman, Bernard Jay and musical director Rowan Bakker embarked on another round of auditions.
After several auditions, the creative team identified three highly talented people to join the cast: Masego Mothibakgomo, Terrence Ngwila and Lebo Borole. 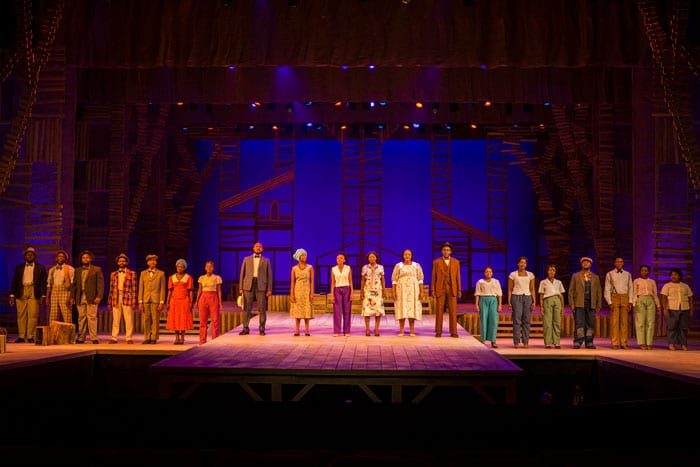 Well-known actress and vocalist Lelo Ramasimong, who initially played the role of Darlene in The Color Purple, will now be stepping into the leading role of Shug Avery. Ramasimong created her own fan base during The Color Purple’s first season with her spine-chilling vocalisation of the role of Darlene. Now her fans can’t wait to experience her play the gutsy, blues singing star, Shug Avery.
Masego Mothibakgomo takes over the role of Darlene from Lelo Ramasimong.
Terrence Ngwila will be playing the role of Grady.
Lebo Borole also joins the company.
‘I continue to be thrilled with the levels of talent displayed by South African artists,’ says director Janice Honeyman. ‘Masego, Terrence and Lebo will fit beautifully into the wonderful family we have brought together on stage for The Color Purple.’
The Color Purple will reopen at The Mandela at Joburg Theatre on 7 August and will run until 2 September 2018.
To secure your tickets now before they’re sold out again, you can call 0861 670 670 or go online at www.joburgtheatre.com – or book in person at Joburg Theatre’s box office. Theatre patrons can also book online and pay at selected Pick n Pay stores.
To read more about Masego Mothibakgomo, Terrence Ngwila, Lebo Borole, and other cast members, purchase our July 2018 issue, or continue supporting the arts and culture sector by subscribing to our monthly Creative Feel magazine.