Artist Proof Studio is one of the most successful visual arts education facilities in South Africa, producing top-quality artists and printmakers who are respected worldwide. They are leaders in fine art printmaking excellence, specialising in arts training, print collaborations, partnerships, sales and distribution of prints. 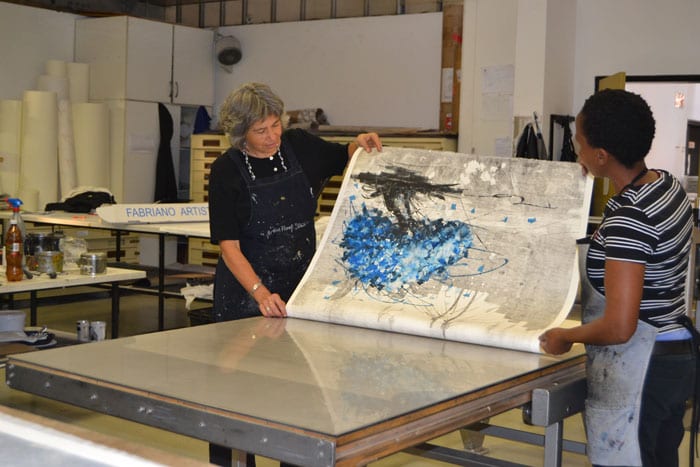 Artist Proof Studio (APS) is a community-based printmaking centre in Newtown, Johannesburg, founded by Kim Berman and the late Nhlanhla Xaba in 1991.
One of the largest and most vibrant printmaking facilities in Southern Africa, the organisation’s core function is to create ‘possibilities through excellence’. This extends from their education programme, which subsidises and trains talented young artists, to their alumni and associated artists.
APS’ education programme accommodates up to 100 students per year, 60 to 80 of which are fully subsidised by hosting, publishing and collaborative projects with many artists and organisations each year. Some of these students are further sponsored to achieve a university degree.
APS has 30 staff members and interns on its payrolls. The organisation employs its fourth-year graduate as interns. Through this programme, they receive professional work experience and are expected to independently produce work that can be showcased on all of APS’ sales platforms.
Some of the well-known young artists today have either graduated from or been associated with APS, like Nicholas Hlobo who became of protégé in the Rolex Mentor and Protégé programme and whose artworks can be seen at major art fairs around the world. Phillemon Hlungwani, Mongezi Ncaphayi, Jan Tshikhuthula, Themba Khumalo and Nelson Makamo are a handful of well-known APS alumni.
By chance (or perhaps not), Creative Feel has featured artworks by APS alumni two months in a row now. Themba Khumalo’s Let’s Fly Together As One graces our June cover – the print depicts the iconic Turbine Hall with a flock of birds flying over it in Khumalo’s signature style.

Khumalo has become known for his emotive charcoal drawings that capture busy cityscapes and the vast empty fields he observes in and around Joburg where he lives. In an interview with Kholisa Thomas, Khumalo said that ‘One of the themes behind my work is based on my relationships with people. In my work, I explore feelings of connectivity and isolation. My attempt is to build trust and closeness with others through my artwork. There are never human figures in my images. Electric poles, plugs and cables feature a lot in my work, these are metaphors for life, energy, hope and movement.
This year, Khumalo’s work will be for sale by Gallery2 at RMB Turbine Art Fair.
The artist behind our July cover, Lebohang Motaung studied at both APS and the Vaal University of Technology.
A hairstylist in addition to being an artist, Motaung’s work focuses ‘on the activity and process of doing hair, and the significance of hairstyles in women. I am mostly influenced by the conversations I have with some of the people I plait.’ She works mostly in printmaking and drawing, centring around the theme of hair.
Another technique that Motaung has developed is using synthetic hair fibres to create portraits, with braids and plaits often reaching off the canvas.
Blaque Inq Contemporaries will present // MORIRI | We’re O U R S E L V E S at RMB Turbine Art Fair.
Artist Proof Studio’s stand at RMB Turbine Art Fair is a must visit; find some gems from some of South Africa’s top artists, or invest in some of the country’s most promising young artists.

To read more about APS’ collaborative printmaking, Motaung, and what Khumalo says about creating possibilities through excellence, purchase our July 2018 issue, or continue supporting the arts and culture sector by subscribing to our monthly magazine.