When South African theatre maker Jenine Collocott produced her play, Making Mandela, in 2015, one of South Africa’s most significant theatre reviewers, Robyn Sassen, wrote on her blog, ‘Telling Mandela’s story to young people is a massive challenge as it is a tale so rich with values, contradictions and real-life adventures. In the hands of this talented cast and creative team, it needs a little more massaging, but promises to be the play that will touch and ignite many a young person’s reflections on one of the biggest historical heroes who was a part of South Africa’s bigger narrative.’
The production, which tells the story of Nelson Mandela’s childhood, featured the talents of Jaques De Silva, Mlindeli Zondi and Barileng Malebye. It went on to win the 2015 Standard Bank Ovation Fringe Award at the National Arts Festival and the 2016 Naledi Theatre Award for Best Youth Production. The cast was also nominated for the Naledi Best Ensemble Award. The play also had a season at the 2014 ASSITEJ Congress in Denmark.
In her review, Sassen commented that it was ‘a lovely work, albeit with a few dents that affect its clarity’ but overall she summed the production as having the potential ‘to hold a whole generation’s imagination.’ 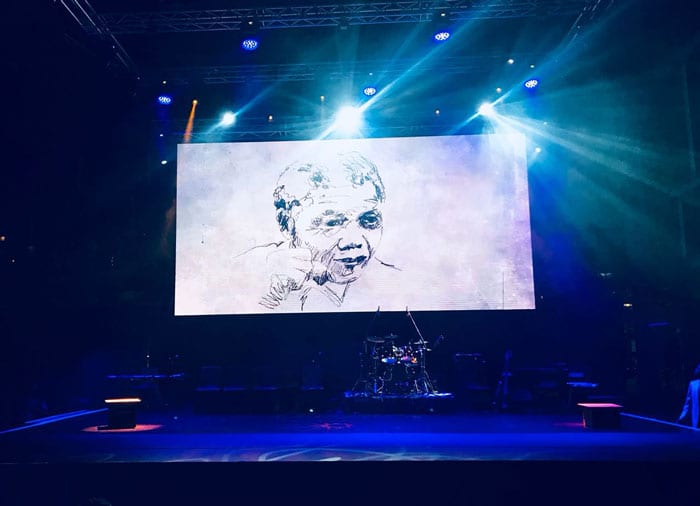 Cape Town Opera’s story of Nelson Mandela, Mandela Trilogy, brings to the stage an epic and original musical tribute. It is an inspirational musical retelling that reaches far beyond any boundary, reflecting on a life of extraordinary contrasts and unflinching courage in the face of adversity.
Mandela Trilogy is a spectacular portrait of a man who touched hearts and minds around the world. Presented in three parts by a cast of over 60 performers, including three different incarnations of Mandela, the contrasting phases of his journey are recreated through strikingly divergent styles of music, ranging from tribal initiation rites on the banks of the Mbashe River and heady and rebellious jazz-fuelled days in Sophiatown, to incarceration and reflection on Robben Island, and finally freedom and liberation.
Since 1994, South Africa has not been short of theatre productions about the iconic leader. Neither has South Africa been short of controversy associated with productions about the legendary political leader whose life is celebrated across the globe.
To read more about The Mandela Opera, the events leading up to Mandela’s 100th birthday, Amandla! The Story of Nelson Mandela, James Ngcobo and 100 Faces of Madiba, purchase our July 2018 issue, or continue supporting the arts and culture sector by subscribing to our monthly Creative Feel magazine.