Coming together to mark Jamal’s recently-published book, In the World: Essays on Contemporary South African Art, these renowned critical thinkers will engage in an open-form discussion about being a working art critic. Does art criticism still matter?
Published by Skira, one of the world’s oldest international art publishers, In the World is an extensive collection of essays on artists including Mary Sibande, Zanele Muholi, Kate Gottgens, Robin Rhode, Georgina Gratrix, Mohau Modisakeng, Anton Kannemeyer, Kemang Wa Lehulere, Pieter Hugo, Esther Mahlangu, Conrad Botes, and Wim Botha.
“Ashraf Jamal’s wide-ranging, passionately engaged and sometimes startling essays focus on twenty-four South African artists,” comments Sean O’Toole. “Some are well-known figures, others – argues this persuasive critic and visual theorist – deserve wider notice. While drawn to things particular artists do and say, what Jamal presents here exceeds mere journalism. His writing proposes an argument with the genteel notion of a stable South African art canon. The precariousness of the South African idea, a malleable idea subject to widespread negotiation in the present tense, demands a highly mobile form of critical activism. Jamal is exactly the right man for the task.” 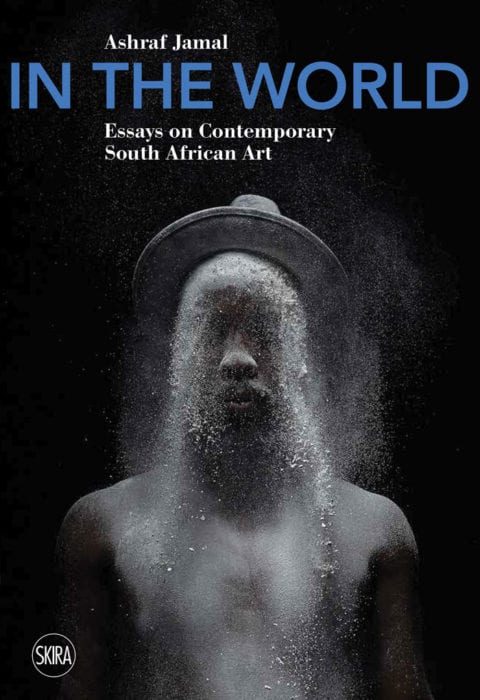 Jamal’s other published works include Predicaments of Culture in South Africa, 100 Good Ideas Celebrating 20 Years of Democracy, and Love Themes for the Wilderness, as well as the award-winning short fiction, The Shades. Jamal’s edited volume on Robin Rhode, an interdisciplinary South African artist based in Germany, will be published in 2018. Alongside his standing as one of the country’s leading cultural analysts, Jamal works as a teacher in the media studies programme at the Cape Peninsula University of Technology and as a researcher at VIAD at the University of Johannesburg.
O’Toole is a journalist, art critic, editor and writer based in Cape Town. A regular contributor to the Sunday Times, Mail & Guardian, Aperture (USA) and Artforum, (USA) for five years he wrote a bi-monthly column for Frieze magazine (UK). Co-editor of CityScapes, an occasional magazine devoted to contemporary urbanism, he is a past editor of Art South Africa magazine (2004–10). He has published one book of fiction, The Marquis of Mooikloof and Other Stories (2006), and has edited two collections of essays, uber(W)unden: Art in Troubled Times (2012) and African Futures (2016). His doctoral research focuses on the intersection of literary fiction and art criticism.
Jamal will be in conversation with O’Toole on May 23rd 2018 in the second of the recently launched Talking Art at Keyes series which provides a platform for engagement in robust discussions about how art informs, challenges and moves us. Whether an experienced collector or avid enthusiast, Talking Art at Keyes is an inspiring and informative place to learn and engage with artists, curators, collectors and other industry specialists – and May’s event is not to be missed.
Talking Art at Keyes | 18:00 at Keyes Art Mile Atrium (Talk begins at 18:30) | Parking available corner Keyes & Jellicoe Avenue. Attendance is free but pre-registration is required as seats are limited:
Bookings via Quicket: http://qkt.io/3zI9SC or e-mail bronwyn@abetterworld.co.za
On arrival, guests will be offered a complimentary glass of wine from Spier and the talks will be followed by a open discussion, wine bar and music.
Books will be available for purchase at a special price of R850 with cash and Snapscan.
Twitter: @keyesartmile @skiraeditore and @artbook | Facebook.com/keyesartmile | Instagram: @keyesartmile @skiraeditore and @artbook | Event hashtag: #keyesartmile #skira