Rays of Tel Aviv sunshine stream in from the skylights, illuminating the studio where Batsheva’s The Young Ensemble, the junior troupe of Israel’s renowned Batsheva Dance Company, rehearses daily. Londiwe Khoza, 23, stands alert amid the international assortment of preternaturally talented dancers. Together, the group shifts seamlessly, like a school of fish, their serpentine spines twisting and their limbs deftly sculpting the space. Later they whirl with dizzying speed before tilting, daringly off-kilter and tearing across the floor.

The best thing for me to do is just be completely open to anything and everything, and literally be a sponge

At every turn, Khoza and her counterparts meet the gaze of audience members scattered around the perimeter; they watch raptly as the ensemble rehearses Kamuyot, by Batsheva’s Artistic Director Ohad Naharin. The dancers periodically take a seat among the spectators, but they return again and again to the centre, where Khoza pours every molecule of her being into Naharin’s playfully idiosyncratic choreography.
Khoza’s nuanced, full-bodied performance of Kamuyot springs from a thoroughly immersive experience with Naharin. A graduate of the rigorous Cape Academy of Performing Arts, she performed with the neoclassical Cape Dance Company and Joburg Ballet before making the leap from her native South Africa to Israel in August 2016, steeping herself in Naharin’s world through daily classes, rehearsals and performances. ‘One of the best things is that Ohad insisted I come here for the year,’ she reflects at a bustling patisserie a few steps away from Batsheva’s base at the Suzanne Dellal Centre for Dance and Theatre.
Naharin has served as Artistic Director of Batsheva since 1990, energising the troupe and propelling it – and contemporary Israeli dance – into the international limelight. His choreographic career of nearly 40 years has been widely celebrated, his works shaping not only Batsheva’s identity but the repertories of companies throughout North and South America, Europe, Asia and Australia. Nevertheless, when it came time to pick a protégé, he notes, he ‘wanted to work with a dancer, not a choreographer… Dancers need schooling. And dancers learn by meeting people who can teach them the right stuff.’ 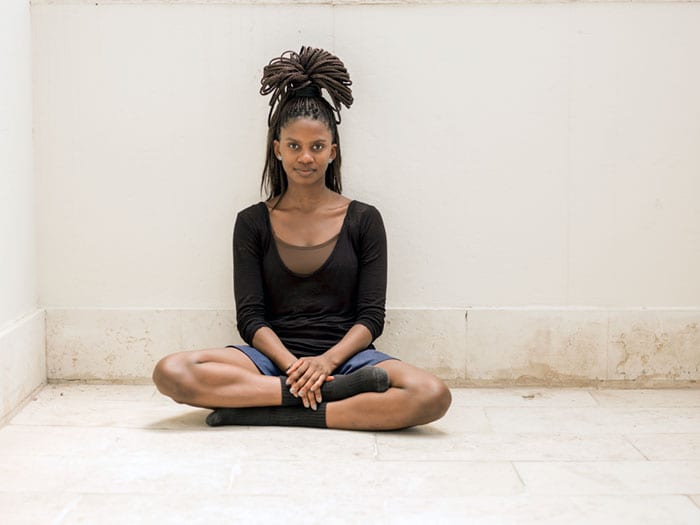 Naharin plunged into the professional dance world in the mid-1970s. Fresh out of the Israeli military, where he served in the entertainment corps, he landed an apprenticeship with Batsheva and was singled out for a solo role by the legendary Martha Graham. After moving to New York to dance with Graham’s company, he brushed up on ballet and modern dance technique at The School of American Ballet and at Juilliard.
As Naharin developed as a choreographer, his quest to communicate with his dancers led him to create his own movement language, which he dubbed Gaga. Rich with physical sensations and textures, Gaga continues to evolve through constant exploration. ‘What I like is to share what I discover, because I invest in it time, energy and thought,’ Naharin muses, referring to his research of Gaga and the broader wisdom he has gleaned inside and outside the studio. ‘I feel it’s a privilege to meet very talented people, not less talented than me, but who didn’t have the time to invest in this research, and I can just give it to them.’
Upon meeting Khoza, Naharin recognized her gifts as a dancer, lauding her ‘passion, hunger, curiosity, talent’, as well as her potential. Meanwhile, Khoza quickly perceived that Naharin had much to offer and decided, ‘the best thing for me to do is just be completely open to anything and everything, and literally be a sponge.’
Having made the long journey to Tel Aviv, Khoza needed to bridge the distance between her ballet roots and Naharin’s unconventional approach. The choreographer observed of his protégée, ‘Londiwe is very rich, she’s very committed, she has natural talent, yet her experience created a gap between what she can do and what she does.’ 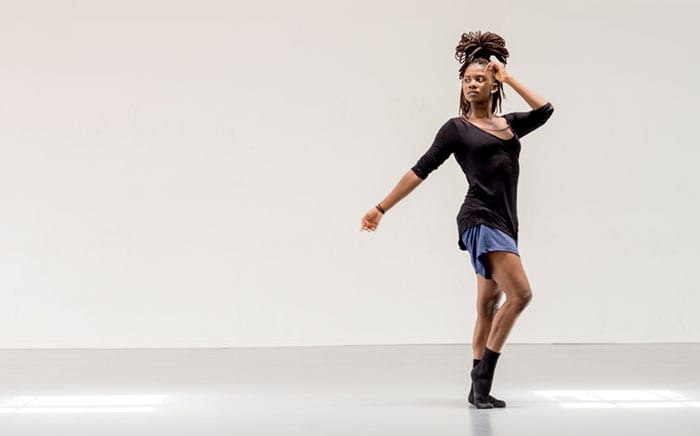 Although Khoza’s extensive ballet training was rounded out with modern and contemporary dance, hip-hop and tap – and singing and acting courses for good measure – Gaga classes presented dramatically new terrain. Rather than execute a series of structured exercises based on codified movements, Khoza accepted Naharin’s invitations to explore his multilayered instructions while improvising. Rather than striving to shape her body into a predetermined form, she now sought to listen – really listen – to her sensations. ‘Sometimes I felt like I was a newborn giraffe – everything just felt foreign,’ she says.
Naharin challenged her to increase her attention to the multitude of information transmitted from her body, including details previously unnoticed. ‘As a dancer, you’re aware of your body, but you are not as aware as you think,’ Khoza acknowledges. ‘Ninety per cent of the time you’ll focus on what your legs are doing and not focus on what’s happening anywhere else. Here, I have to be aware of everything. I have to be aware of my fingernails!’
While grappling with Gaga, Khoza tackled another formidable task: embodying Naharin’s repertory. Her previous performance experience had encompassed corps de ballet parts in the classical canon, as well as roles in contemporary dance by choreographers tracing their lineage from Alvin Ailey to Akram Khan, but Naharin’s idiosyncratic style was wholly unfamiliar. Working primarily under the watchful eye of the ensemble’s rehearsal directors, Khoza immediately began to learn Deca Dance, a fluid frame remixing excerpts from the choreographer’s masterpieces. Next, she undertook the family-friendly Kamuyot, then the audacious Naharin’s Virus, a 2001 tour de force featuring text from Peter Handke’s Offending the Audience. 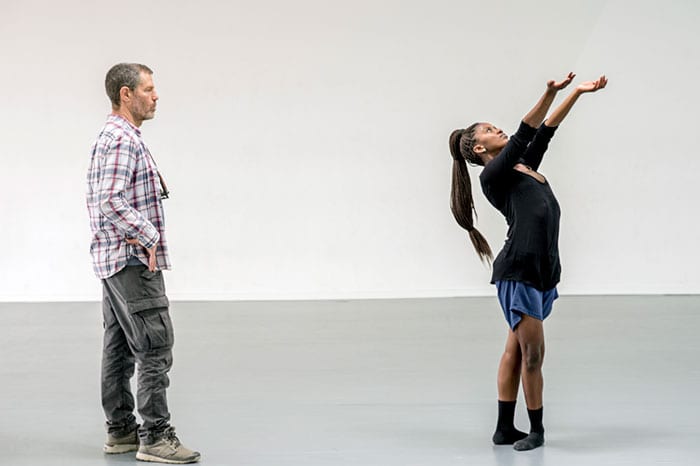 Khoza recounts that during her first few months with the ensemble, ‘there was what I did in class, and then there was learning repertory, and I couldn’t quite bridge the gap between what I’d learned in class and apply it to the repertory.’
Yet the dancer’s increasing grasp of Gaga – which Naharin often refers to as a toolbox relevant not only for his repertory but for other contexts – enabled her to more readily inhabit the choreography. Newly absorbed in the restaging of Naharin’s now classic Mamootot (2003), she reveals, ‘I am immediately feeling that flow of energy and implementing things that I’ve really connected to in class into the repertory. The gap is getting a little bit smaller.’
Input in rehearsals from Naharin and his trusted team has further enriched Khoza’s interpretation of the repertory. ‘You’ll be working on something for three weeks, and then [Naharin will] come in and say something, and you’ll completely understand what you’ve been trying to do,’ she says.
Working with Naharin has afforded Khoza an alternative perspective stretching far beyond her performance of a specific body of work. Without discounting her previous training and experiences, she believes new artistic avenues have opened up for her to explore, from improvising to bringing her own state of mind into a choreographic work, and dancing from the inside out rather than the outside in.
‘I had to learn to come with a completely different approach and allow myself freedom, without thinking of every count and eye line and arm line. It’s giving yourself the freedom that you don’t have to look exactly like the next person. Now it’s that next step of being able to allow myself to tap into my fantasy of things and really explore that without worrying about things being right or wrong. That’s where I’m at, being able to merge the fantasy of things into the physicality of things, and not just worry about what it’s meant to look like.’

This transformation in Khoza’s approach is visible to Naharin. ‘It’s not about a particular style or particular schooling,’ he remarks approvingly. ‘It’s about the body, the use of gravity, the use of distribution of effort, the clarity of her state of mind, the sublimation of emotions and feelings into the clarity of movement. There’s something very alive, more animalistic and sophisticated at the same time. I can see with Londiwe that she opened up. She learned to be in the moment when she dances. She learned about her instinctive movement. Even when it’s very choreographed, it’s much more her own than a phrase she learned and needs to execute. It becomes her language, instead of her quoting somebody else. But it’s still a beginning. She’s been here only a few months. She will continue to grow for many years.’
Khoza can sense changes in her body and dancing are afoot, and while Naharin and others have spoken to her about these developments, she recognises that some shifts will become clearer to her only with more time.
‘It’s something that will probably have a ripple effect along the line,’ Khoza says, noting this experience is ‘giving me new tools to be able to really get out what I want to say, do things in a way that I would actually want to do them and not limit myself to what I think I am and who I think I am.’
It’s a statement that Naharin, who frequently urges his dancers to go beyond their familiar limits, might appreciate. ‘I’m really glad that I’ve had the time that we’ve had together,’ Khoza declares. ‘It’s very rare that you get an opportunity like this to be in an environment like this with someone like this and be able to learn from him.’ With a contract for the ensemble’s upcoming season in hand, Khoza is poised to absorb even more insights from Naharin as she continues her artistic journey.
Deborah Friedes Galili is a dance researcher and Gaga teacher whose writing includes the book Contemporary Dance in Israel, as well as articles for newspapers, magazines and academic journals. This article was published with kind permission from Rolex. Naharin and Khoza partook in the 2016 – 2017 cycle of the Rolex Mentor and Protégé Arts Initiative.