“We think we are liberated by individualism, but in reality we’ve given up so much power. People are so caught up in the nuances of their own personal realm that they’ve lost real civic relationships with one another. We’ve lost that collective power.” – Andrea Zittel

Chris Soal’s artistic practice, is initially concerned with materiality. Specifically thus far, the materiality of objects which are available en mass and utilised daily by millions of people globally and then disposed of. These objects (toothpicks and bottle tops for example) are not only easily attainable, but are so common that they have become invisible to our eyes. They are manufactured for a single utilitarian purpose and are then discarded, once having served their purpose. They hold no value beyond that moment. These objects are manufactured to become debris. They exist on the margins of human existence, and they are indicators of a capitalist system that has a hierarchy of value, in relation to objects, materials, and even people. The choice to use these marginal materials was not immediate however, as the artist himself was entrapped by these very systems of value which he seeks to critique, and initially dismissed toothpicks and bottle tops as “unworthy” material for an artwork. 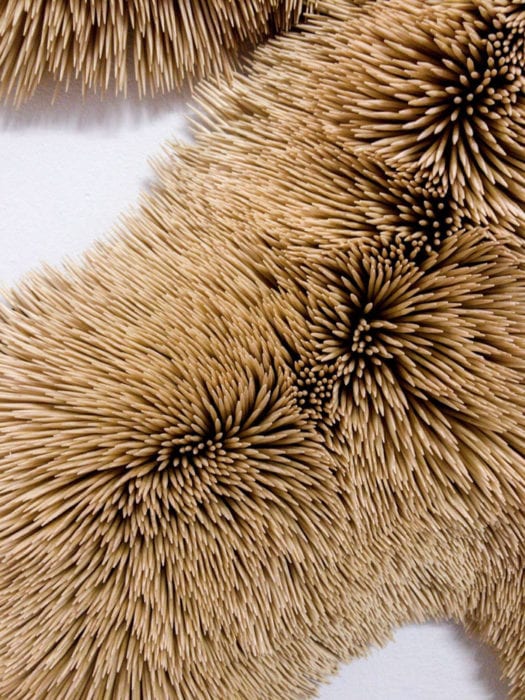 Soal is interested in the knowledges which are transmitted when bodies come into contact with one another. This is where he sees aesthetic judgment residing; in the world of things, not merely in concepts, emerging as the result of physical experience. It is due to this, that he consciously foregrounds the use of material in the artwork, with the intention of producing physical sensation. The viewer is integral and foremost in mind as the artist engages with the materials. For this body of work, it is the formal dynamism produced by the arrangement and use of toothpicks as a medium, which engages the viewer on a physical level, encouraging a visceral reaction; in some it urges them to recoil. On the other end of the spectrum, some viewers are overcome with a desire to touch the work.
The singular becomes plural. And it is in this plurality that the material begins to transcend itself. It is then in the moment of unveiling, the moment where the object is not only revealed but renewed for the viewer, that the value of it is altered, and thus our understanding of its value in relation to ourselves, changes. In this way the work gains political currency, and the titles become triggers for further contemplation. The artworks utilise form and materiality to reiterate that the viewer is a member of the “polis,” the citizenry; a part of a community.
Titles such as Orbits of relating, A delight in knowing and being known, and Little moments that remind us of ourselves, suggest a communal relating through the use of plural pronouns, read in the voice of the viewer, the first person. This not only suggests the concept of relational collectivity between viewers in the exhibition space, but also allows the artworks to become relatable themselves, by assuming anthropomorphic qualities. The quote by artist Andrea Zittel, whilst only discovered towards the end of the process, encapsulated and vocalised the artist’s desire that the work speak to a common human experience, a reminder which is sorely needed in a global society becoming seemingly evermore fractured.

Little moments which remind us of ourselves.

Little moments which remind us of others.

If only we could suspend disbelief.

This exhibition marks Chris Soal’s first solo body of work, to be publicly exhibited, since his graduation show at Wits Art Museum in 2017. It combines the artist’s previous use of bottle tops, as well as pointing into his sporadic forays into cement and rebar as materials, whilst foregrounding this body of work as a material exploration of toothpicks through sculptures, installations, drawing and three-dimensional wall pieces.
Chris Soal was born in South Africa in 1994. He graduated from the University of Witwatersrand with a Bachelor’s in Fine Art (Honours) in 2017. Today he lives and works in Johannesburg. He was awarded the Sculpture category and Overall Award at the PPC Imaginarium in 2018. He was selected as a finalist for the Cassirer Welz Award in 2017, the Wits Young Artist Award in 2016 and 2017, The SA Taxi Art Award in 2016 and the Thami Mnyele Award in 2015. Chris Soal was awarded a residency in 2018 by the South African Foundation for Contemporary Art. This residency was held in Knysna at Entabeni Farm for a duration of six weeks alongside fellow South African artist, Minnette Vari. He has exhibited in group shows at institutions such as Aeroplastics Contemporary in Brussels (2017), Wits Art Museum (2017), Fried Contemporary (2017), Museum of African Design (2016), Assemblage (2016), No End Contemporary (2017, 2018) and Galerie Noko (2016). Chris regularly exhibits at art fairs around Europe with Clifton Boulder Gallery.
Alongside his own artistic practice Chris works as a cinematographer at the Centre for the Less Good Idea, founded by South African-born, internationally renowned artist William Kentridge, and as a contributing writer on art and culture for Bubblegum Club.
Soal’s exhibition Orbits Of Relating will show from 24 May – 23 June 2018 at No End Contemporary Art Space | 60 4th Ave Linden, Johannesburg.