Set against an episode from the Indian epic, The Mahabharata, the play interweaves personal narrative and contemporary realities with the lives of two women from the founding years of the Cape Colony to interrogate the Womb of Fire that birthed South Africa.

We follow Grote Katrijn van Pulicat’s  (1681-1683) journey across India to Batavia and then to Cape Town as the first female bandit slave; and we explore the briefly brutal life of Zara (1648-1671), a Khoekhoen servant woman who was violently punished posthumously by the VOC for the crime of suicide. Womb of Fire looks at the power of the performing female body to challenge the pornography of Empire, in the process decolonising and retrieving itself. The play reaches back and forward across time to reassemble the dismembered body allowing it to speak. It is a roar, not a lament. 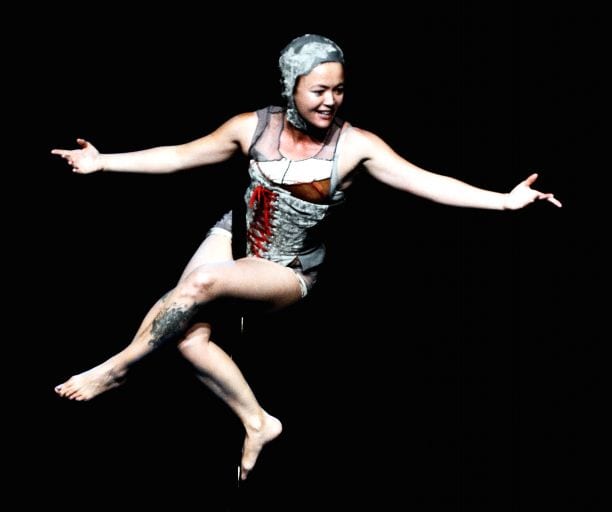 The Mothertongue Project was started in 2000 by Sara Matchett and Rehane Abrahams with the production What the Water Gave Me. Since then, both Abrahams and Matchett have been separately researching the body as a site for personal and political agency and embodied performance as a practice of Freedom. Now, some 17 years later, the two return to see how their explorations intersect in a production that focuses on the female body in performance as a site for disruption and decolonisation. Blending new methodology, new research with a wealth of experience the two are set to explore a new lexicon in performance practice.
We are delighted and honoured about the Womb of Fire playing at the Baxter. This powerful play interweaves personal narrative and contemporary realities with the lives of two women from the founding years of the Cape Colony to interrogate the Womb of Fire that birthed South Africa. It won the award for Best Performer, Best Director and Best Production at the Woordfees in Stellenbosch this year. Book here!
At the recent eighth Baxter Zabalaza Theatre Festival, which was arguably one of their most successful festivals to date on so many levels, the production Onweer won the Best of Zabalaza Award. Every year we select one production which gets to do an entire run at the Baxter. Tickets are only R75 per person. Book now.
For the classical music lovers, we have an extraordinary treat this May. The Award-winning concert pianist, and a beloved professor of music at the Cleveland Institute of Music, Antonio Pompa-Baldi, will be playing a piano recital with works by Hummel and Poulenc amongst others. Don’t miss this incredible pianist. Book here.