‘Paint talks, if you allow it,’ says artist Elsa Duault as she discusses her upcoming exhibition Spectrum of Life at Berman Contemporary with Lucinda Jolly.

Artist Elsa Duault crouches barefoot on the floor, pouring bright pigments onto a large stretch of paper like a small, pale god creating worlds. Duault is in the throes of generating a body of work called Spectrum of Life, comprising 60 oval pieces, some sculptures, collages and photographs. Her method loosely refers to the ancient marbled paper technique known as ebri in Persia and ebru in Turkey (both meaning ‘cloud’), and the Japanese suminagashi, meaning ‘floating ink’.
But what precisely is marbled paper? Its origins are said to be as ungraspable as the instability of the process, which is shrouded in secrecy. This is partly because recipes were closely guarded, but also because marbled papers were never signed, the artist’s identity was never known. Historians indicate that the name comes from its similarity in appearance to veins in marble stone. Briefly, the technique involves floating pigment on a liquid to create a pattern. A piece of paper is then placed over the liquid to receive the patterns. 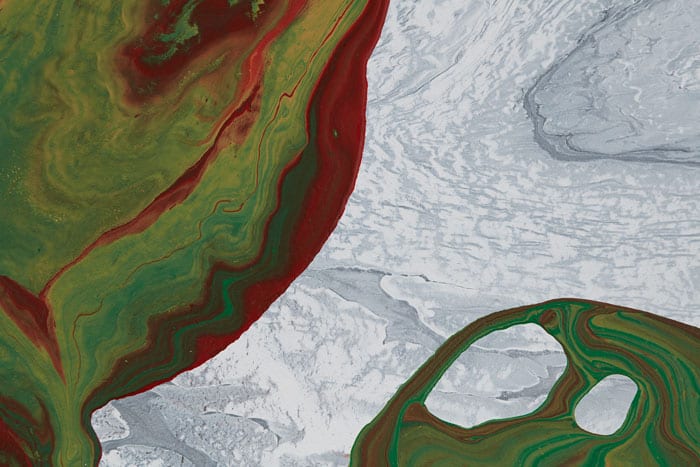 The bible of this technique must be Richard J. Wolfe’s book, Marbled Paper: Its History, Techniques and Patterns. Wolfe suggests that the precursor of marbling was as early as the 6th century in China, where paper was dyed in orange, yellow and red mixtures as a protection from the ravages of insects.
Paper marbling really comes into its own in Japan in the 10th century at the time when, as Wolfe explains, Japan was extricating itself from the strong influence of China and finding its own autonomy. For 400 years, marbled paper was reserved exclusively for the Imperial House of Japan and nobility.
In the 15th century, marbled paper took hold in Turkey and Persia. It was used there for official documents as it eliminated forgery and was given as gifts by nobility to other nobility. It is not known for certain whether the adoption by these countries had any connection with Asia.
Wolfe writes that marbled paper became known to the West via charmed travellers to Turkey and Persia in the middle of the 16th century who brought samples home to Europe. Once marbled paper found its way to the West, it became prevalent in everyday life from the lining of cupboards to drug powder wrappings and wall coverings. It remained popular from the mid-17th to mid- 19th centuries. With the advent of the Industrial Revolution and its emphasis on mechanisation, it faded into obscurity along with many hand-crafted processes. However, since the 1970s there has been a revival of the craft.
Duault first came across marbled paper unexpectedly, unaware of its existence, on the cover of her artist grandfather’s portfolio. She says, ‘I was drawn to its hand-made quality.’
Although Duault’s works echo traditional marbled paper in technique and abstraction, strictly speaking, they are probably closer to fluid painting. Fluid painting is defined as an abstract art utilising acrylic paints which, when combined, react to create organic-looking forms. 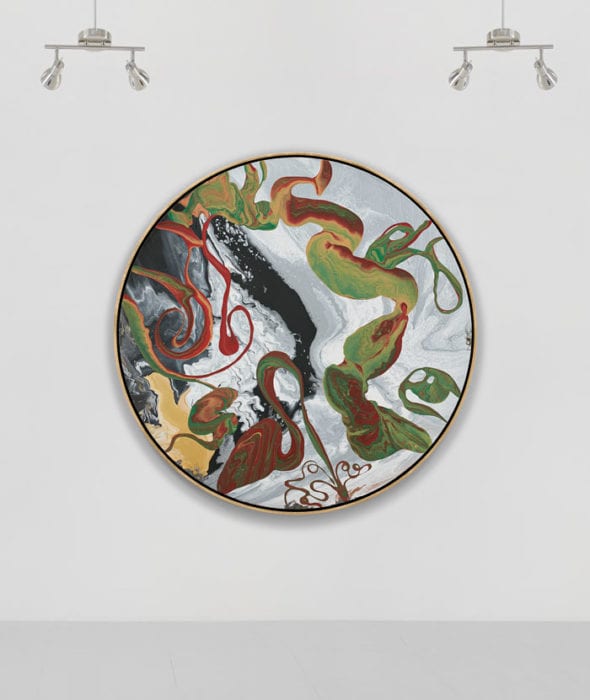 An example of fluid painting with a spin is French artist Frédéric Fontenoy’s Blood and Milk series, where the elements of blood and milk are combined and captured on film with dramatic effect. Duault became aware of the relatively new fluid paintings ‘everywhere’.
‘I’m always looking for the new,’ she says. In fact, fluid painting was used in an advertisement for the Apple iPhone. But it was the British fluid painter, Mark Chadwick, who Duault found online five years ago, that turned her on to her current process.
Duault experimented for two years, culminating in a paper marbling workshop in 2016 in Avignon, France, at the historical Palais des Papes. Her approach is a highly focused, physical one. As an ex-figure skater, she understands how ‘in synchronised skating, you have to break up the body with movement to make it interesting.’ She applies the same principle to her art pieces.
‘The process expresses natural forces,’ she explains. It involves the forces of both gravity and balance, the allowance for the element of chance and the acknowledgement that there is ‘no sole creator’ and that ‘other forces are at work.’ Ironically, she adds, ‘You have to control the gesture.’
Ultimately, ‘you want your viewer to feel the energy of the process,’ she says. The outcome is work with a dynamic feel, suggestive of having caught and captured movement mid-stream.
Duault’s works are both meditative and complex pieces ‘inspired by the natural environment’. ‘Nature is all around us – even in utilitarian objects such as furniture,’ she says. Her work celebrates the natural world, and her inspiration is entirely appropriate given the current scarcity of natural resources, pollution, greed and plundering.
Her visual influences are, understandably, Paul Klee and Wassily Kandinsky, both masters of process and chance. Intellectually, she is in thrall of the writings and thoughts of the astrophysicist Hubert Reeves and cosmologist Stephen Hawkings.
Although her current work may be more complex than in the past, it maintains its original organic and aerial view feel. In this way, viewers can look forward to a slight shift in Duault’s modus operandi – with the introduction of the human element. The start being a self-portrait using a combination of marbling and fluid painting techniques.