Prolific pianist and composer Sibusiso Mash Mashiloane will be performing at The State Theatre on Friday 13 April and on Friday 18 May at 20:00. Tickets are R120 at Computicket.
Audiences can expect two ground-breaking performances that are completely different from each other. For the first concert, happening on 13 April, Mashiloane is bringing the powerful Mash Trio from Durban. Joining Mashiloane on keys will be Riley Giandhari on drums and Dalisu Ndlazi on bass guitar. There will be a special feature by vocalist Mihi Matshingana.
“A visit to The State Theatre is extra special, since it is my first time in the city. The audience can expect music from both my albums and a little preview from my upcoming album “Closer to Home”….Expect traditional jazz that radiates a South African heritage sound” promises Mashiloane.
For the second performance on 18 May, Mashiloane wants to bring a homage to his legends. For this performance Sibusiso Mash Mashiloane will be presenting some of the finest music composed by legendary musicians: Zim Ngqawana, Andile Yenana, Moses Taiwa Molelekwa and Bheki Mseleku. Mashiloane has a long-term view of conscientising Africans about the value of their own works and aims to breed a new de-colonised generation of musicians, music collectors and live music audiences who will pride themselves about their own African heritage.
“I feel honored to get an opportunity to pay tribute to my legends. This is the music I grew up with, that influenced me and coming from the composers that I respect so much. I want to make sure these compositions will never be forgotten. It is our heritage that must be preserved.” Says Mashiloane 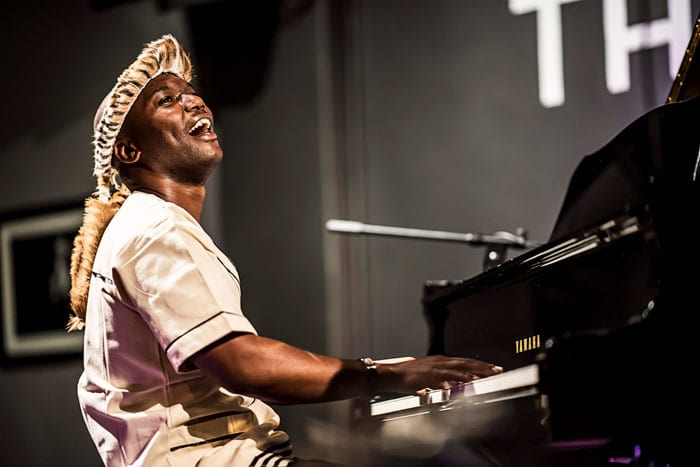 Sibusiso Mash Mashiloane is a prolific artist who’s academic credentials speak volume for the kind of passion and discipline he has for music. He has a Masters in Jazz Performance and graduated Cum Laude from the University of KwaZuu Natal. Mash is an integral performer and has been well received by audiences while touring the country and beyond to promote his two albums “Amanz’ Olwandle” (2016) and “Rotha – A Tribute to Mama” (2017).
His debut album “Amanz’ Olwandle” (released in December 2016) was the first glimpse of a very promising musical journey through jazz, an accrual and reflection of every music experience he has accumulated throughout his upbringing and music career. “Amanz’ Olwandle” was awarded with 2 awards at the first ever Mzantsi Jazz Awards, best Contemporary Jazz Album (decided by a jury) and Best Jazz Album (voted for by the public). The awards aim to recognise excellence in jazz music in South Africa.
In August 2017, his second album “Rotha – A Tribute to Mama” followed. This second album is an acoustic traditional jazz album that radiates South African heritage sound and universal jazz influences. He describes this album as mostly sharing Coltrane’s harmonic movements with African influences within the melody and most notably references to South African tribal and spiritual sounds.
Not only is Mash a great artist in this very vibrant time in South African jazz music, he also is a teacher with a focused goal to help grow talent form a firm foundation of African Roots. He lectures at the University of KwaZulu Natal and Durban Music School. His focus is to teach and organize live music performances with his students focusing on South African composers and in line with this development Mashiloane is currently busy with his PHD focusing on South African composers.