‘Berlin, the greatest cultural extravaganza that one could imagine.’ This quote could have summed up the recent Rolex Mentor and Protégé Arts Weekend, whose eighth cycle was held in Berlin during February, but it was actually said by David Bowie, who loved Berlin, and about a Berlin that loved Bowie. In the late 1970s, the musician stayed in Schöneberg for two years and his song ‘Heroes’ is often seen as a Berlin anthem. His quote seems timeless.
Berlin today is a most creative space and is still a great source of inspiration for any artist as the recent Rolex Mentor and Protégé Arts Weekend showed again.
While attending the Arts Weekend, I was reminded of an earlier mentorship: Christopher Isherwood came to Berlin in 1929, following his mentor W.H. Auden as he was looking for freedom and an artistic community that would nourish his unconventional spirit and early writings. I am a Camera and Cabaret sealed the success of that time.

Though the Rolex Mentor Protégé programme has the goal of helping artists, it also allows an extremely rare opportunity for both leading and up-and-coming stars to mingle with one another. During the days (and nights) of the Arts Weekend, you eat, sleep, experience and discuss arts and culture. You meet former mentors, protégés and arts journalists from every part of the world.
Berlin was the perfect location. The spectacular places Rebecca Irvin, head of Rolex Philanthropy, had secured for the presentations and panels for the participants, mentors and protégés from past cycles, advisors in all the disciplines and the general public, showed Berlin at its very best. To be in the Gemäldegalerie or the Staatsbibliothek or the Deutsches Theater or the Kammerspiele or the Staatsoper seated among so many talents was truly a very special moment. As was the happy evening at Clärchens Ballhaus, where the participants casually met on the first night. 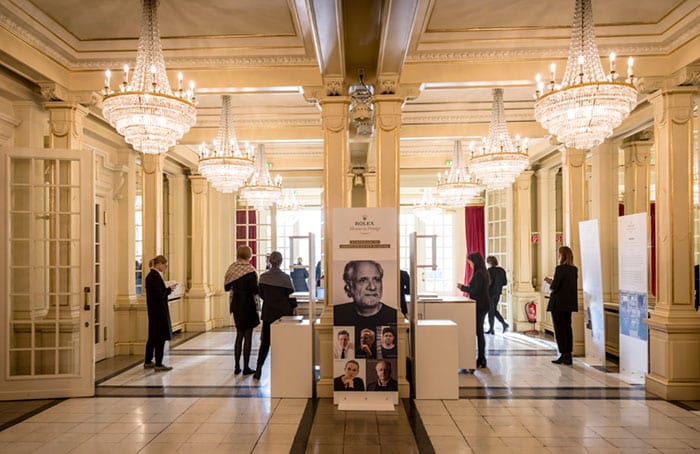 All through the weekend, protégés from current and previous cycles met and shared insights and strategies, while mentors and advisors also had a great time. It would be like endless name-dropping if I mentioned them all. Mentor William Kentridge, protégée Lara Foot, advisor Gregory Vuyani Maqoma – who seems to know the whole worldwide dance fraternity and is in great demand for future collaborations. Anish Kapoor, mentor to Nicholas Hlobo, and Olafur Eliasson, whose studio is in Berlin. Wayne McGregor, Lucinda Childs and Alexei Ratmansky – three very different style choreographers – sat in the same row and watched our dance protégée Londiwe Khoza and her mentor Ohad Naharin present his particular dance process, which he has named ‘Gaga’. We watch the four-wall film presentation by Robert Lepage’s theatre protégé Matias Umpierrez.
For me, this time in Berlin was extra special, I actually managed to meet, interview and chat to Philip Glass, whom I have long admired. Glass is a cultural icon who reaches across generations and genres – even outside the world of music – with his unique work. The young Peruvian composer and musician Pauchi Sasaki was Glass’s protégée during 2016 – 2017 and he introduced her and her composition to the packed audience in Berlin. Her composition, GAMA, set against a swirling black-and-white background, delivered a stirring conclusion to the Arts Weekend.
A relationship between a great mentor and a gifted protégé can work and produce wonderful work in dance, music, film, theatre, literature, architecture and visual arts as seen this year again in Berlin.