Since 1995, during the first half of every year, South Africans have celebrated some of the most important socio-political events in accomplishing the reconstruction of our nation’s history and the building of a free and democratic future.

Following Human Rights Day on the 21st of March, we also celebrate Freedom Day on the 27th of April to commemorate the first non-racial democratic elections, which took place on that day in 1994. South African labour associations have also, since 1895 on the 1st of May, participated in the international May-Day celebrations, which commemorate the establishment of an eight- hour work day and the legalising of trade unions; and on the 16th of June, we commemorate the student uprisings in Soweto during 1976, in recognition of the sacrifice and contribution that our youth have made to the struggle for democratic freedom. All these public holidays not only provide South Africans with much needed free time to relax or spend with friends and family, but also an opportunity to remember and reflect on the cost of that freedom and to commemorate those that sacrificed their own freedom and lives in building a new South Africa.
In celebration of these public holidays, the MTN SA Foundation features the Remember Your Freedom exhibition at the MTN head offices on 14th Avenue in Fairland, Johannesburg, from the end of March to the end of June. The exhibition comprises a selection of paintings, drawings and sculptural pieces by legendary South African resistance artists such as Thomas Nkuna, Charles Nkosi, William Kentridge, Robert Hodgins, Deborah Bell, Willie Bester, Willem Boshoff, Anthony Nkotsi, to name a few.

This exhibition also features a selection of linocut prints from the Images of Human Rights portfolio, which was initiated by a Durban-based non-profit organisation, Artists for Human Rights, in 1996, the same year that South Africa’s Constitutional Assembly adopted our nation’s new Bill of Rights. A group of 27 artists were chosen by regional galleries and each received a brief to create a black and white image of one of the 27 clauses of the new Bill of Rights. While aiming to re-inspire and communicate the meaning and spirit of Human Rights to South Africans, the collection also engages on issues that threaten our democracy – issues such as racism, poverty, poor education and other scourges. Master printer, Jan Jordaan, of the Fine Arts department at Technikon Natal, printed each limited edition of the 50 portfolios. In 1998, MTN contributed towards this important initiative and acquired one of the Images of Human Rights portfolio for the MTN Art Collection. 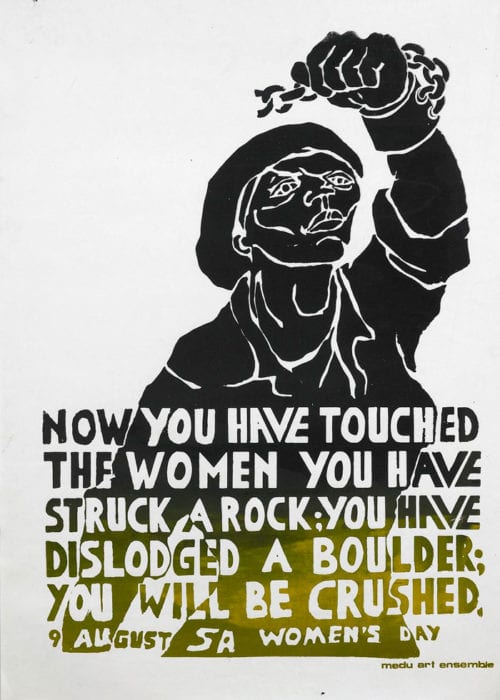 A selection of MTN’s resistance poster collection of 158 pieces dating from the 1950s to the early 2000s also features on this exhibition. Many of these posters made at Medu between 1979 and 1985 were designed and printed by artist Thami Mnyele. In 1978, Mnyele left South Africa to go into exile in Botswana. Here he joined the ANC and co-founded the Medu Arts Ensemble, an organisation of artists, musicians, writers and actors who ran workshops in printmaking, photography, film, theatre, music and literature. Mnyele devoted the rest of his short life to political and educational work. Early in the morning of 14 June, 1985, South African forces crossed the border into Botswana and launched an attack on Mnyele’s house. He rushed towards the fence of the property, but was shot dead as he clambered over it. Afterwards, when the soldiers found Mnyele’s works, they put bullets through each piece. Some were salvaged, but many of his works were seized by the authorities. These have never been recovered.
MTN has invested in the support of South African artists and art-initiatives since 1997 and continues to do so through arts and culture CSI projects focused on training, publishing, awards, art collection partnerships, national touring exhibitions and in-house exhibitions at MTN’s head offices.
To view the Remember Your Freedom exhibition please contact Niel Nortje at the MTN Foundation on niel.nortje@mtn.com for a guided walkabout.