PJ Powers launched her new song ‘Walk In My Shoes’ at the Human Rights Festival which took place at Constitution Hill, Johannesburg, over the weekend. As an award winning musical artist, PJ Powers already has 12 gold discs, four platinum and a gold CD under her belt. She is also known as an author, writer, speaker and philanthropist. 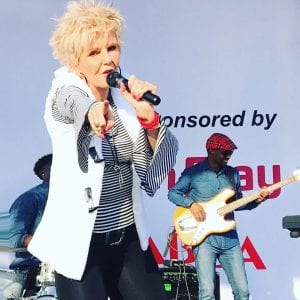 ‘Walk In My Shoes’ is a song that encapsulates the need for all of us to understand each other’s life journey’s from past to present and how we can support each other to deliver on our individual and collective needs and desires. It is a strong message for us to make sure we do not turn a blind eye to the social injustices around us.
PJ Powers wrote the song on the basis of her work with NGO Khulisa Social Solutions over the past 2 years. PJ has spent many hours engaging with underprivileged people from disadvantaged township communities. The song ‘Walk In My Shoes’ is just one of the many tools that PJ Power will use to continue campaigning for social justice across South Africa.
I wrote a song about what it would be like to live in that community. and what would you tell a privileged person. The opening line is ‘Hey there, I would like to introduce myself to you’, and I think that’s the magic of the song. It’s a conversation that says, ‘take a walk in my shoes’ – PJ Powers.

PJ Powers and Professor Thuli Madonsela
Both social justice activists in their own rights, PJ Powers and Professor Thuli Madonsela joined forces to create awareness around World Social Justice Day at an event at Constitution Hill on 20 February 2018. This event marked the launch of The Thuli Madonsela Foundation and Khulisa Social Solutions ‘Walk in our Shoes’ collaborative programme. The campaign is based on interactive storytelling that promotes dialogue around issues relevant to social justice with a view to developing a measurable, sustainable call to action in order to bridge the great divide between the ‘haves’ and the ‘have nots’.
In just one month since the launch of this campaign, they have already achieved the following:

The collaboration between PJ Powers and Thuli Madonsela will continue with the launch of PJ Power’s new single, ‘Walk In My Shoes’, where Thuli Madonsela will appear in the music video – aiding to the carry though message of the ‘Walking in our Shoes’ campaign.
To download PJ’s new song, choose from one of the options below:
Apple / iTunes | Spotify | Amazon | Google Play | Deezer