From 27 March 2018, visitors to the Fugard Theatre, situated in District Six in the Western Cape, will be treated to the theatre’s first production of The Road to Mecca, performed by an extraordinary South African cast.

Written in 1984 by Athol Fugard, The Road to Mecca is inspired by Helen Martins, who lived in Nieu-Bethesda and created the famous The Owl House – now designated a provincial heritage site. The play tells the story of a woman’s desire for personal and artistic freedom within the narrow confines of a conservative and highly religious community in the Karoo in early 1970s apartheid South Africa.
Legendary theatre critic Frank Rich, writing in The New York Times about The Road to Mecca, commented ‘The Road to Mecca examines the core of artistry… Artists are driven to forge their version of the truth even when they have no hope of an audience, even when they must work with the most humble of materials in the middle of nowhere. Artists are dangerous because they won’t deviate from that truth, no matter what pressure to conform is applied by the society around them, reminding us that the artistic conscience is inseparable from the moral conscience.’
Sandra Prinsloo is Miss Helen (Moedertaal, Die Naaimasjien, So Ry Miss Daisy, Oskar en die Pienk Tannie, The Gods Must Be Crazy, Miss Julie), Marius Weyers is Rev. Marius Byleveld (The Fugard’s The Father, Oom Wanja / Uncle Vanya, Hamlet, Twee Grade van Moord, The Gods Must Be Crazy) and Emily Child is Elsa Barlow (The Fugard’s The Eulogists, The Pervert Laura, The Father). Weyers and Prinsloo were last seen on the Fugard Theatre stage together in Wie’s bang vir Virginia Woolf?. 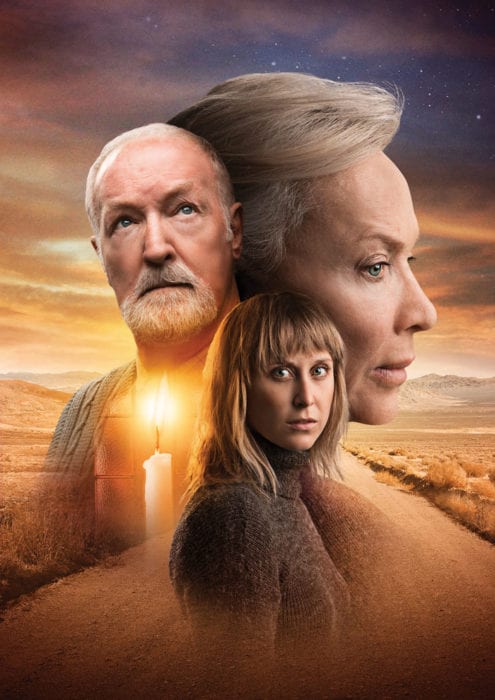 Athol Fugard was born in 1932 in Middelburg in the Karoo. An internationally acclaimed playwright, director and occasional actor, for over half a century he has written almost 40 soul-searing plays with roles for all South Africans that have moved audiences in South Africa and around the world to laughter and tears; plays that reflected the inhumanity of apartheid. His plays champion truth and a fundamental universal humanity. In 2011, he received the ultimate recognition from the world’s most prestigious theatre community – a Tony Award for Lifetime Achievement in Theatre. He is also the author of four books and several screenplays. His plays include Blood Knot, Boesman and Lena, Master Harold and the Boys, The Train Driver, The Blue Iris and The Shadow of the Hummingbird. Many of his works have been turned into films, with director Gavin Hood’s Tsotsi, based on his 1980 short story of the same name, won the 2005 Academy Award for Best Foreign Language Film – South Africa’s first Academy Award in this category. Fugard’s work spans the period of apartheid in South Africa, through to the first democratic elections, to Nelson Mandela’s presidency and into present-day, post-apartheid South Africa.

The recipient of numerous honorary doctorates and awards, Fugard was awarded the prestigious Praemium Imperiale global arts prize for Theatre/Film by the Japan Art Association in 2014. One of the most performed playwrights in the world, he continues to direct and write plays. He shares his life with his wife, the writer and academic Paula Fourie, and their dog Jakkals.
The Road to Mecca will run at the Fugard Theatre from 27 March 2018 until 12 May 2018, Tuesday to Saturdays at 20:00 with a 16:00 matinee on Saturdays. The Fugard Theatre is situated in the heart of District Six, on the corner of Harrington and Caledon Streets, Cape Town.
Tickets range from R130 to R230.  Bookings can be made through Computicket on 0861 915 8000, online at www.computicket.com or at any Shoprite Checkers outlet. Bookings can also be made at the Fugard Theatre box office on 021 461 4554. There is a generous 15% discount available for the Friends of the Fugard members.