There’s a captivating line-up for March and April at the Fugard Bioscope, including dance, drama and opera.

The Bioscope presents screenings of the world’s best recorded live theatre, opera and ballet productions to be enjoyed from the comfort of a Fugard Theatre seat and on the Fugard’s full size high definition cinema screen with a 7.1 dolby digital surround sound system.
Productions staged by companies such as the National Theatre, Royal Ballet, Royal Opera House, Bolshoi Ballet and Young Vic are filmed live, transporting you directly into the heart of the action on stage.

Tosca is one of the great evenings of opera, and from its strident opening chords conjures up a world of political instability and menace. Jonathan Kent‘s production for The Royal Opera captures the dangerous political turbulence of Rome in 1800. With its gripping plot and glorious music, Giacomo Puccini‘s dramatic work remains one of the most performed of all operas.
Internationally acclaimed theatre director Yäel Farber draws on multiple accounts of much told story of Salomé to create her urgent, hypnotic production on the stage of the National Theatre. This charged retelling turns the infamous biblical tale on its head, placing the girl we call Salome at the centre of a revolution.
Wheeldon‘s adaptation of William Shakespeare‘s play features British Principals Lauren Cuthbertson and Edward Watson dancing the parts of Hermione and King Leontes in the Royal Ballet’s production of A Winter’s Tale on 8 April. Complete with colourful costumes and mesmerising stage effects, Wheeldon’s production is widely acclaimed as a modern classic, tracing an emotive journey of redemption and reconciliation as a compelling dance-drama. 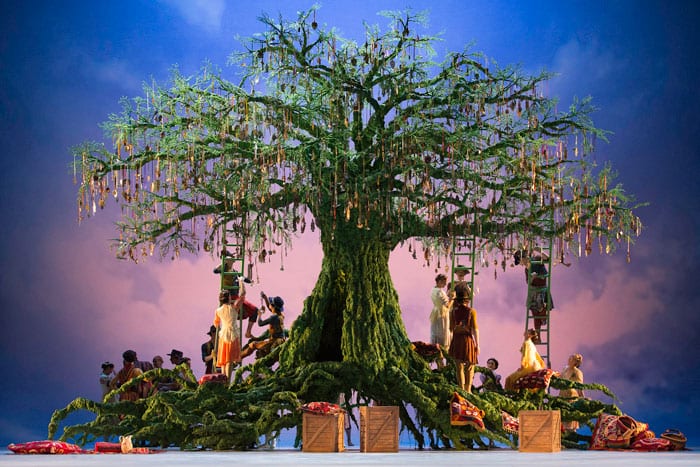 The incredible Billie Piper returns in her Olivier Award-winning role in the Young Vic’s production of Yerma. A young woman is driven to the unthinkable by her desperate desire to have a child, in Simon Stone‘s radical production of Lorca‘s achingly powerful masterpiece. ‘Shatteringly powerful’ (Independent); ‘an extraordinary theatrical triumph’ (The Times).
In Bernstein Centenary three Royal Ballet choreographers honour the creative genius of Leonard Bernstein as part of the special worldwide centennial celebration of works created in response to his music. This programme includes two world premieres of by Wayne McGregor and Christopher Wheeldon, as well as the first revival of Liam Scarlett‘s The Age of Anxiety set to Bernstein’s Symphony No 2.
Rounding off the April programme is the National Theatre’s ‘thrilling revival’ (New York Times) of Cat On A Hot Tin Roof, starring Sienna Miller alongside Jack O’Connell and Colm Meaney, directed by Benedict Andrews.
Tickets cost R100 and can be booked through Computicket on 0861 915 8000, online at www.computicket.com or at any Shoprite Checkers outlet. Bookings can also be made at the Fugard Theatre box office on 021 461 4554.
The Fugard foyer bar is open from 10:00 on Sundays, serving a range of delicious light snacks as well as the finest coffee, wine and drinks.
The Fugard Theatre is situated in the heart of District Six, on the corner of Harrington and Caledon Streets, Cape Town. Harrington Street car park is located at the corner of Caledon and Harrington streets and is available for the use of Fugard Bioscope patrons.
For further information about the 2018 Fugard Bioscope season visit www.thefugard.com