Sue Grafton, mastermind of the beloved and hugely popular alphabet series of mystery novels, which kicked off with A is for Alibi in 1982, has died at 77, according to her daughter, Jamie Clark. Grafton reached ‘Y’ in the series when she published Y is for Yesterday in 2017. Her books have been published in 28 countries and translated into 26 languages, and she has a ‘readership in the millions’.
In her note, Clark said that Grafton had been battling cancer over the past two years. She reiterated that Grafton did not want any of her books to be adapted into movies, nor did she want to have a ghostwriter ever write under her name. As such, ‘because of all of these things, and out of the deep abiding love and respect for our dear sweet Sue, as far as we in the family are concerned, the alphabet now ends at Y.’
Sue Grafton was a trailblazing writer of American detective stories. Her 25 novels featuring the private eye Kinsey Millhone established the hard-boiled female detective as a viable alternative to the males who had dominated the genre. Millhone, an ex-cop and twice divorced, was a tough character, but in Grafton’s hands, she also had a deep understanding of the effects the crimes she investigated had on people. Grafton set her books in a Californian city called Santa Teresa, a fictionalised version of Santa Barbara. 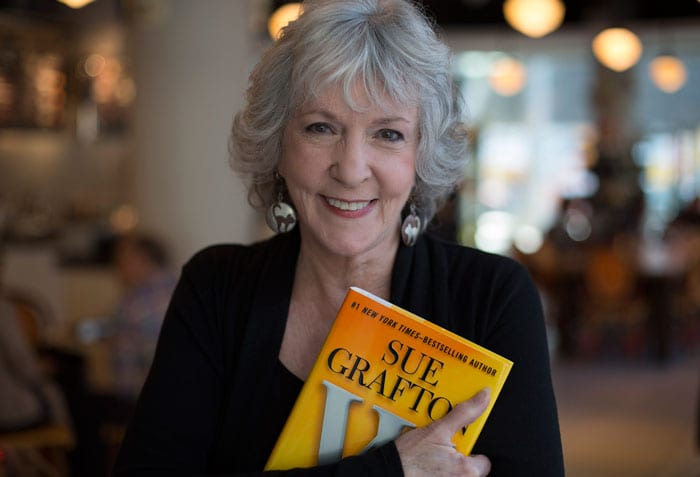 Much of Millhone came from Grafton’s own experience. She was born in Louisville, Kentucky, where her father, Chip Grafton, was a bond lawyer who also wrote detective novels under the name CW Grafton, and her mother, Vivian (nee Harnsburger), was a teacher. Both were alcoholics, and from an early age, Grafton was left to look after herself. After a year at the University of Louisville, she transferred to Western Kentucky State Teachers College (now Western Kentucky University), where she married James Flood and had two children. The relationship ended quickly. After her mother’s suicide in 1960, she returned to graduate from Louisville in 1961. She dropped out of graduate school after marrying again – to Al Schmidt – and followed her husband to Santa Barbara. There she worked in office jobs while writing in her spare time.
Grafton said she taught herself to write her first mystery by reading how-to books and teaching herself California criminal law, private eye and police procedures – ‘anything that seemed relevant to the job.’

Sue Grafton was a trailblazing writer of American detective stories. Her 25 novels featuring the private eye Kinsey Millhone established the hard-boiled female detective as a viable alternative to the males who had dominated the genre.

In the late 1960s, her second marriage ended in a protracted divorce and custody battle so brutal that she would jot down notes of ways to kill her husband, which later found their way into her novels. She married Steven Humphrey, a philosophy professor, in 1978. They collaborated on teleplays, including two Agatha Christie adaptations – A Caribbean Mystery, starring Helen Hayes as Miss Marple, and Sparkling Cyanide, with Anthony Andrews as Tony Browne, both airing in 1983. The couple eventually split their time between Santa Barbara and an estate in Louisville, with Humphrey teaching at universities in both cities.
Her breakthrough came when she started her Alphabet series after it took her five years to write her first novel, and three to write the next. A review in Newsweek aided this breakthrough in declaring that ‘Grafton has created a woman we feel we know, a tough cookie with a soft centre, a gregarious loner,’ and calling A is for Alibi ‘smart, well paced, and very funny.’ That was all the encouragement she needed. ‘It just undid me,’ she said in an interview. ‘Gosh, someone’s paying attention.’ She then began writing a book a year.
As early as 1991, Grafton had announced that the final book in the series would be called Z is for Zero, but after Y is for Yesterday she became ill with cancer and was unable to even begin that last novel. Her family has ruled out further adaptations of her books or any use of ghostwriters to continue the Millhone series. 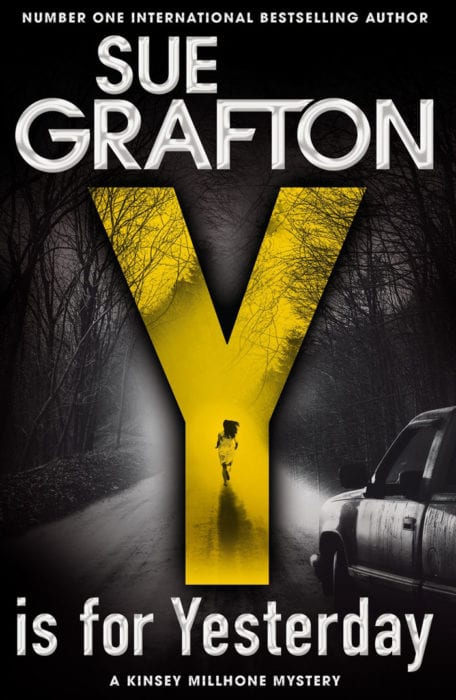 Y is for Yesterday is the 25th in a mystery series about the darkest and most disturbing case report from the files of Kinsey Millhone. Y begins in 1979, when four teenage boys from an elite private school sexually assault a fourteen-year-old classmate, and film the attack. Soon, the tape goes missing and the suspected thief, a fellow classmate, is murdered. In the investigation that follows, one boy turns in evidence for the state and two of his peers are convicted. But the ringleader escapes without a trace.
Now, it’s 1989 and one of the perpetrators, Fritz McCabe, has been released from prison. Moody, unrepentant, and angry, he is a virtual prisoner of his ever-watchful parents – until a copy of the missing tape arrives with a ransom demand. That’s when the McCabes call Kinsey Millhone for help. As she is drawn into their family drama, she keeps a watchful eye on Fritz. But he’s not the only one being haunted by the past. A vicious sociopath with a grudge against Millhone may be leaving traces of himself for her to find…