Kim Berman, the author of the fascinating and inspirational book Finding Voice, is the well-known founder and executive director of Artist Proof Studio (APS), a community-based printmaking centre in Newtown, Johannesburg, and an associate professor in the department of Visual Arts at the University of Johannesburg (UJ), as well as a wonderful artist in her own right.

Being an artist is a key part of my own identity. For me, making an artwork has a physical and emotional impetus that permits me to find a visual and metaphoric voice

Kim has always been deeply committed to political and social transformation in South Africa and in the introduction to her book she writes, ‘The basis of this inquiry is how the visual arts contribute to positive social change. Finding Voice represents the notion that the visual arts are an expression of the aspirations of people in their hope for a more just and democratic society. It emphasises the power and potential of collective voice in the visual portrayal of historical injustice and the envisioning of a new paradigm in which to move forward.’
Kim explains how Finding Voice values co-creation, community participation, and citizen action. She features the visual arts as a mode of knowledge that ‘requires keeping ourselves reflexively open to diversity and to the unexpected, in order to discern those elements that do not fit into our theories or dominant codes.’
Finding Voice is a book of many layers. It speaks to the serious reader, the activist, as well as to anybody interested in the arts in South Africa. It is an account of Artist Proof Studio, its history and the present day. Kim describes how in February 1990, on a television screen in Boston, she watched Nelson Mandela walk out of prison. She wanted to be part of building a post-apartheid South Africa. She sold her car and possessions, bought a French Tool etching press – the Rolls-Royce of studio presses – and took home her vision to start a studio in South Africa based on the professional model of the Artist Proof Studio in Cambridge, Massachusetts, where she had been an apprentice for six years. On her return, Kim and the late Nhlanhla Xaba founded the Artist Proof Studio in Johannesburg to ‘reflect the spirit of a healthy democracy’ and the non-racial ideals expressed in the new constitution. Printmaking was seen as a counterforce to the suspicion and division left from the apartheid years and, as a democratic medium, it was considered especially appropriate in helping to build a truly egalitarian society. Like most community visual arts centres globally, it has had many challenges and achievements.
‘Indeed, the major challenge that I and the founding artists faced during the first decade of APS’s existence was to address the insidious long-term effects of racism and dehumanisation that impeded our efforts to address the lack of opportunities for artistic and educational training. Since the students and almost all of the other founding artists were black, whereas I am white, language and cultural differences sometimes made communication difficult. But we overcame this obstacle by using other modes of communication. For instance, one evening when some of us were making monoprints, the late Gordon Gabashane, who was a musician as well as a visual artist, started dancing to the rhythms created by the colour and energy of the work that was taking place. That moment of using a different creative mode of expression became a significant indicator for understanding the value of multimodal arts-based approaches for engaging change.’ 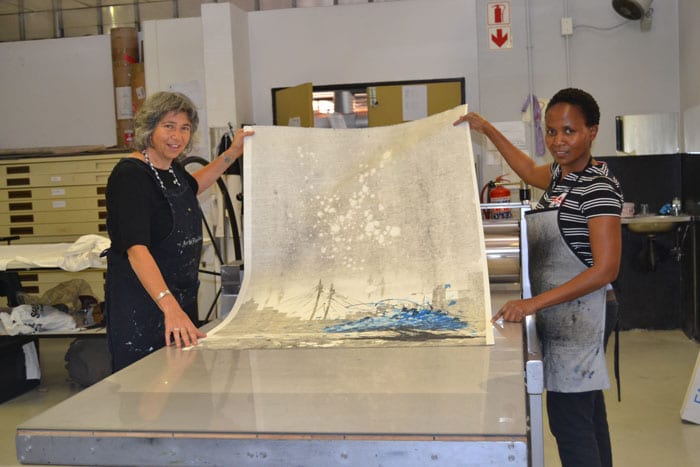 Finding Voice describes the devastating fire that destroyed the studio and in which Xaba lost his life. The tragedy was enormous when over 100 artists lost not only all their work but also a much-loved teacher, mentor, and friend. Kim shows how the trauma affected everyone connected to APS and how difficult it was to start again and for the students to come back and continue with their studies.
Today we know what a big contribution to building a post-apartheid South Africa Kim made by following her dream. APS is now one of the largest and most vibrant community and professional printmaking facilities in Southern Africa, accommodating up to 100 students per year of which 60-80 are fully subsidised by hosting, publishing and collaborative projects with many artists and organisations each year. APS has approximately  30 staff members and interns on the payroll. Some of these graduates have been further sponsored to achieve a University degree and some of the well-known artists today have either graduated from or been associated with APS, like Nicholas Hlobo who became a Protégé in the Rolex Mentor and Protégé programme and whose artwork can be seen at major art fairs around the world, Phillemon Hlungwani, Mongezi Ncaphayi, Jan Tshikhuthula, Themba Khumalo, and Nelson Makamo are APS alumni.Other artists associated with APS include William Kentridge, Walter Oltmann, Norman Catherine, Diane Victor, Gerhard Marx, Willem Boshoff, Colbert Mashile, Doris Bloom, Mmapula Mmakgabo Helen Sebidi, among many others.
Finding Voice also presents a methodology of change in the form of the Paper Prayers campaign. The story of Paper Prayers is set in the context of denialism and shame, resultant from the HIV and AIDS pandemic that had the potential to destroy so many of the gains of Mandela’s vision of a new South Africa. It focuses on the former president Thabo Mbeki’s period of AIDS denialism and APS’s response to it. 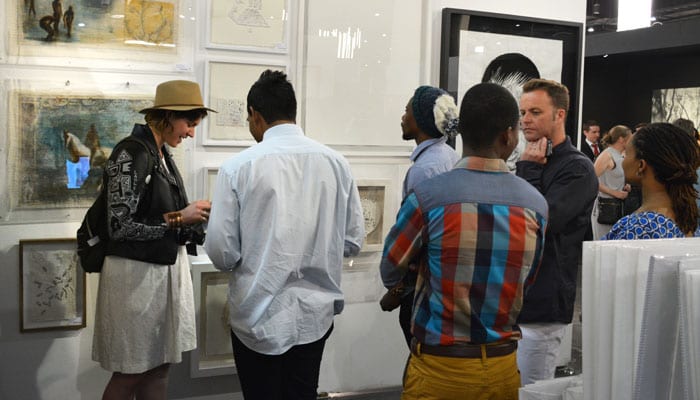 Kim also describes the ongoing struggle of finding funding, like using her own personal artist prize money to implement a special AIDS activist project at APS . She had been awarded this prize as an artist in the prestigious Sasol Wax competition. She talks about the continued struggle of encouraging the students and for keeping her dream alive with selling artworks, the help of corporate sponsorship and the strong supporting board members of APS. Kim tells how an artist like William Kentridge is a key collaborator at APS, and his print projects that use special hand-made paper, also keeps the Phumani archival Papermill going.
The book is also a fascinating account of how Kim questions her own role as founder and executive director over the 26 years of APS’s existence and how she struggles with stepping back. She has an academic position of associate professor at UJ to allow APS to develop its own voice.
Finding Voice covers in detail the stories of building arts organisations  such as APS and the Phumani Paper papermaking craft projects around the country, while addressing methodologies and methods of change; engaging with government and academy; and ways of assessing arts for social change. 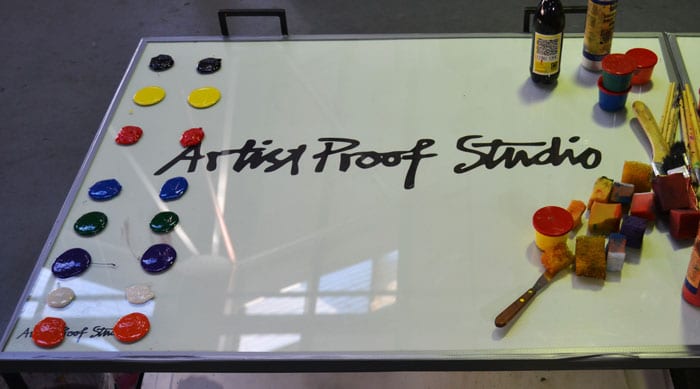 The conclusion states that ‘the common elements running through each of the narratives and case studies in this book show that each intervention is based on the democratic values of human rights and equity.
‘Each intervention described is aimed at encouraging individuals and their communities to believe in themselves and to take steps toward self-actualisation.
‘This approach requires individuals to constantly address conflict and difficulty and find ways to shift lethargy, despair, and denial.’
Finding Voice has been published by the University of Michigan Press, Ann Arbor within their series The New Public Scholarship which is designed to attract serious readers who are invested in both creating and thinking about public culture and public life, I found Finding Voice a book that was most interesting and inspirational, even the footnotes in a different section of the book are fun. At the heart of the publication are stories told in the warm caring voice of Kim Berman who feels that her book ‘proposes a primary role for activists who move beyond traditional theories of social justice to advocate new frameworks…’ Finding Voice goes beyond that!