Dance Umbrella 2018 will take place from 6 to 18 March 2018 at various venues across Johannesburg, celebrating 30 years of new contemporary choreography and dance. 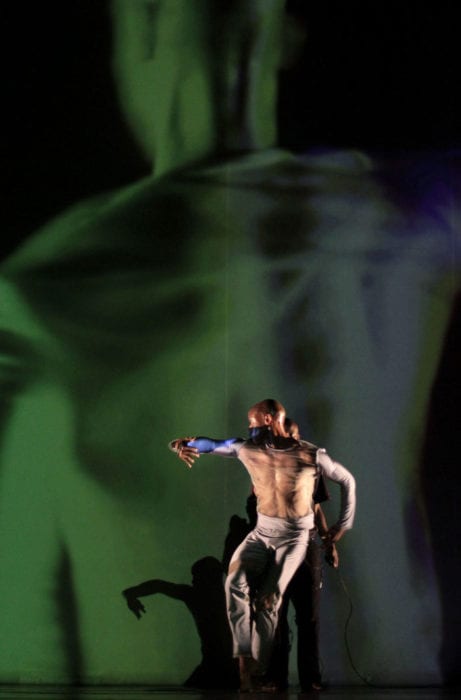 One of the most celebrated events on the Johannesburg calendar, Dance Umbrella 2018 presents a line-up of cutting edge contemporary dance by some of South Africa’s top established and emerging dancers and choreographers.
And So You See…. Our Honourable Blue Sky And Ever-Enduring Sun… Can Only Be Consumed Slice By Slice, a new work by Robyn Orlin, with the beautifully fearless Albert Ibokwe Khoza and Thabo Pule… not afraid to colonise Mozart’s Requiem, they journey through the seven deadly sins finding themselves up close and personal with the norms of our world.
Gregory Vuyani Maqoma and Vincent Sekwati Mantsoe, whose history with Dance Umbrella goes back to when the two were still working with Moving into Dance Mophatong (MIDM), present a double bill featuring Vuyani Dance Theatre. Mayhem by Maqoma reflects on our altered state of mind, our country in confusion, the madness, the feeling of being in suspense in this confined space of words and chaos where we are left with a body of work that strips away the beauty and gives us a mirror to interrogate ourselves, our actions, our responses.

In Mantsoe’s Gula Matari, the dancers become the birds that whistle and use their heads to communicate with other birds.
Auth(o)rise and Memory Box is a double bill with both works by Themba Mbuli. Auth(o)rise, which questions ‘How do women become authors of their own lives if they’ve been told how they should be living socially, traditionally and/or religiously?’ Memory Box is the choreographer’s first autobiographical solo that looks at his upbringing and confronts the concepts of indoctrination which he consciously and subconsciously adopted and that shaped the person he is.
Another double bill will be presented by Louise Coetzer and Musa Hlatswayo. IN C, by Cape Town-based Coetzer, is a vibrant and energetic portrayal of the contrast between synchronicity and counterpoint. IN C is given the 21st-century treatment in its adaptation of Terry Riley’s landmark 1964 composition by Without Eyes, and the neo-classical dancers and choreography highlight its fleeting moments of connect and disconnect. IN C was funded by and commissioned for the Baxter Theatre Centre’s annual Baxter Dance Festival in 2016.

One of the most celebrated events on the Johannesburg calendar, Dance Umbrella 2018 presents a line-up of cutting edge contemporary dance by some of South Africa’s top established and emerging dancers and choreographers.

DODA by Hlatshwayo is a dance theatre duet that explores black male identity and issues around modern day and traditional masculinity in a society that is faced with the struggle of (re) negotiating its collective political socio-political identity. The piece was inspired by the recent incidents in the political scene of South Africa – the ongoing deaths of young black women and the campaigns that were created in response to such doings.
Sick and In-Time by Gustin Makgeledisa and Phumlani Nyanga and Thabo Kobeli, respectively, form an exciting double bill. Makgeledisa’s Sick is drawn from researched material based on human trafficking and prostitution. It captures real-life stories of the innocents – the doers and watchers; where my rights begin, and where yours end.
Partnered by the Forgotten Angle Dance Theatre/Ebhudlweni Arts Centre, In-Time looks at how we are imprisoned within the tick-tocks of the clock which beat to give breath to our existence. Chained in the circles-of-life events, sadness, happiness, life and death, we lose the time that is in-between.
Alan Parker and Gerard Bester’s Sometimes I have to lean in… is a conversation between two bodies. The Wits Theatre, where both performers made their professional debuts at the Dance Umbrella Festival, becomes a space of nostalgia and memory. The moment of their ‘re’-encounter, now in 2018, represents the leaning in of two different bodies within a common space and platform ten and 30 years later.

In a world that is increasingly polarised, the landscape seems to be restricted to black and white. But what about the shades of grey; that wide range of colours reflected by the skins of a global majority, that is still nevertheless labeled as a minority? Moya Michael, in collaboration with Tracey Rose, will explore common visual images that will reflect their histories and where they are today in Coloured Swans.
Hillbrowfication, directed by Constanza Macras and co-choreographed by Lisi Estarás, will premiere at Dance Umbrella before being performed at the Maxim Gorki Theatre, Berlin, in mid-2018. Working with 21 children and youths ranging from ages 5 to 22 from the Hillbrow Theatre Project, three professional dancers have created Hillbrowfication – a work exploring a Hillbrow of the future – to challenge and inspire the young cast to reimagine their neighbourhood and to develop material based on their perceptions and experiences of xenophobia and violence in the city.
Combining creative forces as choreographer and theatre director respectively, Owen Lonzar and Sylvaine Strike explore the life of an online order, ownership; desire, disappointment; objectification and Harvey Weinstein in Doll.
Fana Tshabalala and Vladimir Ippolitov’s Men is a work inspired by the idea of the ‘ideal kind of Man’ within society and how the roles and responsibilities have changed through the years, leaving ‘Man’ in a state of bewilderment.

A ‘Man’ in society is expected to be brave, industrious and domineering and if this is not achieved, most ‘Men’ end up losing their image and ego as the dominant figure in society.

A ‘Man’ in society is expected to be brave, industrious and domineering and if this is not achieved, most ‘Men’ end up losing their image and ego as the dominant figure in society. This work will explore the role of ‘Men’ as strong and muscular, as being more a cliché in modern society; it explores other types of ‘Men’ – gentle, sensitive, caring, a ‘Man’ not afraid of giving voice to his feelings; ‘Men’ who, when needed, will shoulder the burden of taking care of the next person.
Two completely diverse dance companies, the Cape Dance Company and Tribhangi Dance Theatre play, explore and find joy in the synergy of two or more styles nuanced creatively to showcase skills transfer from diverse talents in Elements, composed by Jayesperi Moopen.
Embracing Gravity comes with a multitude of Moving into Dance Mophatong (MIDM) symbolisms. It speaks to one of the basic components of the Afrofusion Technique pioneered by Sylvia Glasser through MIDM. This triple-bill includes newly commissioned works by past and present dancers, creating new works on the current MIDM Dance Company. It also brings together a collage of repertoire paying tribute to Living Legend and Founder of MIDM, Glasser.
In collaboration with Athena Mazarakis, Nicholas Aphane and Shawn Motupi, PJ Sabbagha presents Noah, a return to and the final part of his ‘Noah’s’ trilogy. Started in 1998 with Noah’s Phobia and followed by Noah’s Drowning, the final part of the trilogy brings into sharp focus the ever present realities of environmental degradation, climate change and an immediate future in which the environment we occupy is an active agent in amplifying the fragility and volatility of our imploding present.

This triple-bill includes newly commissioned works by past and present dancers, creating new works on the current MIDM Dance Company.

Thulani Chauke’s Nothing Makes Sense is an interrogation of violence with a specific focus on the violence that emerges because of our continued human obsession with systems of classification based on sex, race, gender, sexuality, class, culture and physical ability. The work is an investigation of the full spectrum of violence that we are all subjected to as a result of these systems, from full blown physical acts of racist, sexist, homophobic or classist violence to much subtler forms of violence that restrict, restrain, moderate or mould our behaviour.
Other highlights include the New Dance Programme, where you can discover the new up-and-coming dance creators and celebrate our diversity: featuring work from Durban, Johannesburg and Cape Town; Sello Pesa’s Bag Beatings, which originally premiered at the Centre For The Less Good Idea; and a series of masterclasses and face-to-face conversations with some of the country’s top choreographers.
For dates, times, venues and ticket prices, visit www.danceforumsouthafrica.co.za or www.creativefeel.co.za for the most up-to-date information. Early bird tickets close on 15 February (call 011 673 0035 to book), with general bookings opening on 17 February on www.webtickets.co.za