Memories of Keorapetse Kgositsile (1938-2018), or Bra Willie, as he was affectionately known, are of a poet who always had a smile on his face, who exuded gentleness, and was soft-spoken. He died on 3 January 2018. 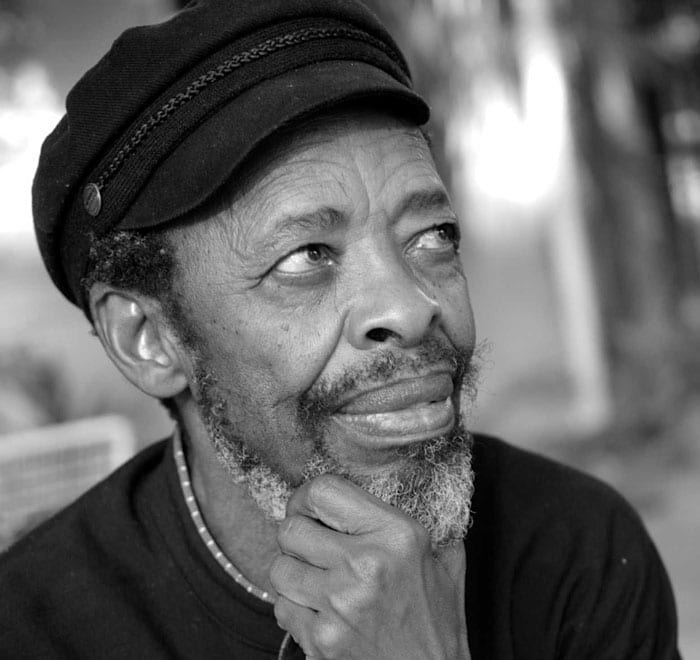 In his schooldays Bra Willie (79) managed to get access to African American poets Langston Hughes’ and Richard Wright’s poems. This was no mean feat in apartheid South Africa when schools for African children either didn’t have libraries or they were poorly-stocked, and African students were denied access to literature deemed to be ‘seditious’. Even my ‘whites only’ school library had no books with African-American poems, still less the apartheid English setwork books.
His first job was working for a 1950s left newspaper, the New Age, which had strong links to the African National Congress. The apartheid regime banned it in 1962.
In 1962 Kgositsile went into exile in the US. His career flourished in Harlem; he gave numerous readings at African-American jazz clubs, and graduated with a Master of Fine Arts from Columbia University.
Kgositsile published ten collections of poetry. The first was Spirits Unchained (1969). Perhaps the most influential were My Name is Africa (1971), The Present is a Dangerous Place to Live (1975) and When the Clouds Clear (1990).

Memories of Keorapetse Kgositsile (1938-2018), or Bra Willie, as he was affectionately known, are of a poet who always had a smile on his face, who exuded gentleness, and was soft-spoken. He died on 3 January 2018.

In 1975 Kgositsile sacrificed his flourishing career to return to Africa to work for the ANC in Dar es Salaam, Tanzania. In 1977 he founded the ANC’s Department of Education in exile, and in 1983 its Department of Arts and Culture in 1983.
He continued to produce poetry and music, melding African and diasporic poetry influenced by jazz.
Kgositsile’s impact on a generation of South African left literary activists during the 1970s and 1980s was immense. Tattered photostats of his work passed from hand to hand were the samizdat of the oppressed under apartheid, which is how we learnt of his poems.
As soon as apartheid censorship ended in 1990, the Congress of South African Writers brought out a selection of his poems When the Clouds Clear. Willie returned to South Africa from exile, and was elected vice-president of the organisation.
Kgositsile wrote of the 1976 Soweto generation who revolted against apartheid, following the imposition of Afrikaans as a medium of instruction.
In our land fear is dead
The young are no longer young …

Kgositsile’s impact on a generation of South African left literary activists during the 1970s and 1980s was immense.

South Africa’s youth reciprocated this admiration: again and again a youthful poet would recite from memory a Kgositsile poem, mimicking his voice to perfection. They enjoyed doing this to his face as much as in his absence.
In today’s literary establishment, none of the country’s literati command this sort of respect.
He was made South Africa’s national poet laureate in 2006, the only person to have been given the honour.
Kgositsile won several literary awards including the Harlem Cultural Council Poetry Award and in South Africa the Herman Charles Bosman Prize, and in 2008 the Order of Ikhamanga (Silver) for excellent achievements in the field of literature and using these exceptional talents to expose the evils of the system of apartheid.
He was married to Melba Johnson, and later to Baleka Mbete, a fellow poet and currently Speaker of the National Assembly. They divorced in 1992. He is survived by his three children.
– Keith Gottschalk, Political Scientist, University of the Western Cape