RMB Starlight Classics takes place on 2 and 3 March at Vergelegen Wine Estate in Somerset West. This Afro Symphonic tribute to our beautiful country brings together a collection of diverse musical talent and incredible instrumentalists, with a visionary selection of young talent. 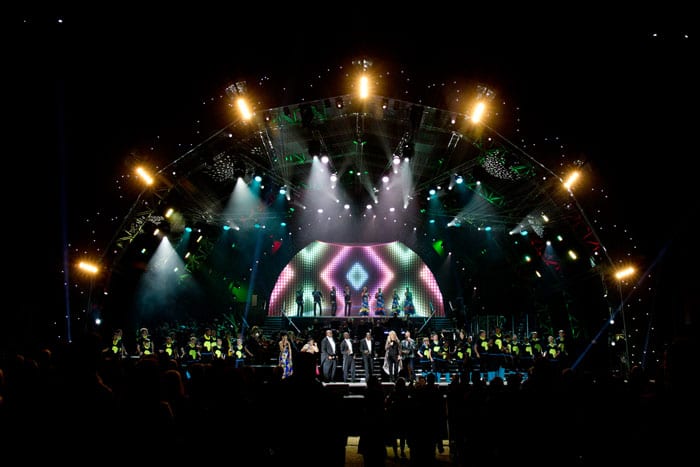 At this year’s RMB Starlight Classics, the Cape Philharmonic Orchestra and vibrant Mzansi Youth Choir will perform with South Africa’s Afro-Jazz-Soul Diva, Lira; The Voice SA winner, Craig Lucas; Classical SA soprano, Cecilia Rangwanasha; Internationally acclaimed SA tenor, Sunnyboy Dladla; Dutch child-star soprano singer, Amira Willighagen; Afrikaans musical icon, Riana Nel; Idols SA winner, Paxton Fielies; child piano prodigy, Qden Blaauw; and Award-winning Dutch violinist, Tim Kliphuis.
Multi-platinum selling songstress, Lira will return to the RMB Starlight Classics after numerous successful performances. She has established herself as one of the most recognisable and respected female artists in South Africa with a formidable presence on the global music scene. Her music career spans 15 years and includes six studio albums, three live DVDs, an autobiography and a movie.
Lira’s career continues to reach new heights. She is the South African brand influencer for cosmetic house Bobbi Brown; is a regularly sought-out magazine cover model; is a judge on the hugely successful The Voice SA; and her touring schedule is fully booked. Following the success of her latest album, Born Free, Lira is currently performing her Be About It Tour. Each show masterfully blends a new sound with the smooth urban direction Lira is famous for.
Twenty-four-year-old Craig Lucas won The Voice SA last year after chasing his childhood dream of becoming a singer. Fulfilling a promise made to his mother, who brought Lucas and his brother up as a single mother in Elsies River in the Western Cape, Lucas first completed a BCom Honours Degree in Financial Analysis and Portfolio Management before pursuing a career as a singer. He secretly entered the competition, only informing his mother once he had made it through the blind auditions. She became his biggest and most vocal supporter, watching with pride as Lucas wowed the judges and audiences round after round.

Late last year, Lucas announced that, after following Paxton Fielies spectacular performances on Idols SA, he would be releasing a collaboration with her. The single ‘Smother’ from Lucas’s album Restless has been an instant success among fans of the artists.
‘We were both among the younger group of contestants in our respective reality shows and we are both new to the industry. I feel like we both bring a fresh new perspective on local music. We also know that we have a lot to prove to be winners of talent shows, so we’re both driven to give our absolute best and make sure whatever we do is done with meticulous attention to detail so that create music of the highest quality,’ says Lucas.
Also hailing from the Western Cape, 17-year-old Fielies became the youngest winner of Idols SA last year and is now determined to complete both her matric and debut album this year.
‘Everyone has been having concerns that Idols (winners) always fade away,’ says Fielies. ‘But I always respond and say that you can depend on the team but if you are not prepared to work hard, that’s when you fade. Your determination will get you where you want to be. My goal is to go international and I won’t stop until I am.’
Young stars really do take centre stage at RMB Starlight Classics this year.
Thirteen-year-old Qden Blaauw is a piano prodigy. 2017 alone was a fantastic year for the young virtuoso. He won seven trophies at the Stellenbosch Eisteddfod and two at the Cape Town Eisteddfod, on top of taking top prizes at the SAMRO Hubert Van Der Spuy Competition. It was also announced that he was one of only ten musicians worldwide, selected from 500, chosen to study with revered pianist Lang Lang at the prestigious Allianz Music Camp in Warsaw, Poland. He was also the first candidate from Africa.

The young pianist, who only began playing five years ago, started taking lessons from a teacher at school. Learning the basic scales at school for the passionate musician, who taught himself to read music by downloading sheet music and watching YouTube videos. He soon began playing complicated Beethoven pieces, his fingers a blur on the keyboard. Not satisfied with simply playing others’ works, Blaauw soon began writing his own compositions – which have been performed at the Oude Libertas Amphitheatre and in Adelaide, Australia.
This year, he will be travelling to Saarlouis in Germany to attend masterclasses under the guidance of Professor Wolfram Schmidt-Leonardy. During his stay, Blaauw will also perform in four concerts, including a concerto with a leading German orchestra. He will once again make history by being the first African to be invited to this prestigious event.
‘I am very excited to perform at the RMB Starlight Classics,’ says Blaauw. ‘The venue is great and the atmosphere will be good. I will also be good to meet some of the other stars performing. I also like to perform at an open air venue since the crowd is normally more interactive.’
If the last year is anything to go by, Blaauw is well on his way to becoming a world-famous pianist.
Amira Willighagen, the young soprano singer who won Holland’s Got Talent in 2013 aged 9, will be returning to RMB Starlight Classics after receiving standing ovations for her performance in 2014. Now 13, she has performed all over the world, has a gold selling album and has performed with popular performers like André Rieu.

Not to be outdone, 24-year-old soprano Cecilia Rangwashana has a host of wins under her belt. She was announced the Overall Winner at the sixth International Unisa Music Foundation Voice Competition and Special Prize Winner for Best Performance – a huge honour in a competition that draws hundreds of the top voices worldwide every year.
Rangwashana started singing at a very early age and represented Limpopo province on national level at the SASCE school competitions from 2009-2012. She completed her B. Tech Vocal Art (Performance) at Tshwane University of Technology under the vocal tuition of Kiewiet Pali, performing as chorus member in the TUT student productions of Faust (2013), La Cenerentola (2014) and Falstaff (2015).
In 2015, she participated in concerts and masterclasses with international voice experts Michelle Breedt, Kliesie Kelly Moog, Barbara Hill Moore and Josef Protschka. She was chosen as one of six singers to take part in the Johannesburg International Mozart Festival (2015, 2016, 2017) and was a semi-finalist in the Mimi Coertse Singing Competition (2015). In the same year, Rangwashana also participated at Amazwi Omzansi Africa National Singing Competition and performed as soloist in the TUT The Coronation Mass. In 2016, she was awarded 1st Prize in the Phillip H Moore Music Competition and 2nd Prize at the ATKV Muziqanto, going on to win that competition in 2017.
Rangwashana joined Cape Town Opera in 2017 and is a member of the Cape Town Opera studio programme. She has toured with the company’s African Angels to Germany and was the First Lady in CTO’s 2017 production of Mozart’s The Magic Flute. Rangwashana is still regularly involved in community projects singing as soloist.
Rangwanasha can speak and also sings in Italian, German and French. Her short-term goal is to study music abroad while her long term goal is to own a music school and host big competitions to share her knowledge and skills with those who aspire to follow in her footsteps.

Sunnyboy Dladla was born in the townships of Piet Retief and originally wanted to be a nurse according to his German Wikipedia page. Encouraged by his schoolmates Pretty Yende and Given Nkosi, who also came from Piet Retief, he went to Cape Town and studied with Sidwell Hartman at the South African College of Music at the University of Cape Town and already performed in some operas during his studies.
In 2009, he graduated from the Zurich University of the Arts with the American lyric tenor, Scot Weir and at the Musikhochschule Lübeck he completed a master class with Renée Fleming.
Dladla is a classical lyric tenor, a Tenore di grazia, and thus predestined for the bel canto parts of Donizetti and Rossini. At his time in Zurich he performed in Lucia di Lammermoor, as Dorvil in La scala di seta, as Paolino in Il matrimonio segreto, and as Nick in Puccini’s La fanciulla del West.
Since 2014, the Dladla has enjoyed great success in Europe among others in  Il barbiere di Siviglia in the Stuttgart State Opera, at the Hessian State Theater in Wiesbaden and at the Deutsche Oper Berlin, where he also took over the role of Gobin in Puccini’s La Rondine.
Internationally Dladla has been contracted for a number of sacred works and sang bel canto programs. On the occasion of the South African Human Rights Day, he gave a Gala concert at the Cape Town Opera together with his school friend, soprano Pretty Yende – the most successful artist to emerge from RMB Starlight Classics.
Award-winning Dutch violinist Tim Kliphuis breathes new life into existing styles with a high-energy blend of classical, gypsy jazz and folk music. His improvised sound is totally new and has popular appeal.

Classically trained, Kliphuis is a highly personal and inspiring performer, composer and educator. He has shared the stage with legends Frankie Gavin, Richard Galliano and Les Paul and has been lauded for his musical genius by Nigel Kennedy. He was awarded the Scottish Jazz Award (International), has collaborated with the Richard Strauss Festival and Netherlands Chamber Orchestra and is the curator of the Fifty Fiddles Festival, in Rotterdam’s De Doelen concert hall.
Rounding off this group of exciting performers is Namibian-born singer-songwriter Riana Nel. Coming from a musical family, Nel was exposed to music from a young age. She began her career as a gospel singer, winning hearts in London, Holland, France and England, before crossing over to popular music. Nel has received a multitude of awards throughout her career, has recorded numerous critically acclaimed albums and has worked with a number of local artists, including Juanita du Plessis, Jay, Lianie May, Bobby van Jaarsveld and many more. Her popular hits ‘Dance’ and ‘Timbuktu’ were used on the soundtrack of the romantic comedy Semi-Soet and ‘Maak oop jou oë’ made a moment in Klein Karoo so much more unforgettable.
Experience this superb selection of musicians for a night of music under the stars at RMB Starlight Classics.