To make their country a top cultural destination that is internationally recognised for art, education and culture, the leaders of the Emirate of Abu Dhabi launched the development of a major universal art museum project.

The Louvre Abu Dhabi museum is not, in any way, a copy of the French Louvre; it is an individual institution offering its own interpretation of a universal museum, reflecting its era and the local traditions of the country it lies in

Built on Saadiyat Island (the island of happiness), a natural 27-km² island the size of a third of Paris, the cultural district will house a number of renowned cultural establishments: the Louvre Abu Dhabi, designed by architect Jean Nouvel; the Zayed National Museum by Norman Foster; and the Guggenheim Abu Dhabi by Frank Gehry. The Cultural District will be integrated into a new urban complex just outside the historic Abu Dhabi city centre, with housing for 150 000 residents. All of these projects are intended to feed the new artistic expressions inherent to a rapidly growing region. The Louvre Abu Dhabi aims to complement the other Emirati museums and help transform the art and cultural scene in the Middle East.
Jean Nouvel, a Pritzker Architecture Prize winner selected to design the museum, was inspired by the special features of the Saadiyat site: a virgin lagoon island between sand and sea, shade and light. His design will offer future visitors a high-impact architectural and museum experience that fosters dialogue between cultures. Nouvel wanted his building to have ’a form that matches its function as a sanctuary for the most valuable works of art.’

The Louvre Abu Dhabi ‘museum city’ covers nearly 64 000 m², with 6 000 m² devoted to the permanent collection and 2 000 m² for temporary exhibitions.
A dome of 180 metres in diameter (the same size as the Louvre’s Cour Carrée) covers two thirds of the museum, providing shade and reducing energy consumption.
Echoing the mosque, mausoleum, caravanserai, and madrasa, its shape is not bound by any literal inspiration: resting on four points of contact and slightly low-slung, it is the embodiment of a completely contemporary style. Pierced with openings to look like interwoven palm leaves, a traditional roofing material in the Emirates, the dome resembles silver lace. A geometric template of stars repeated in different sizes and at different angles in a complex arrangement forms eight distinct layers, four external and four internal. Sun filters through the dome like a delicate, protective rain of light, similar to a claustra lattice of mashrabiyas, reflecting the constant interplay of light and shadow in the country.
Below, Nouvel has designed a complex of buildings with harmonious proportions, embraced by the sea. Freely inspired by buried cities and the prototypical Oriental city, a large part of the museum complex is sheltered under the comfort of this shadow. This urban and geometric ‘medina’ of rooms appears like a city neighborhood, with some 30 buildings visible along a promenade. Rising up to heights of 4 to 12 metres, they each feature a different façade decorated with a variety of piercings, combining unique transitions and passages. The museum city creates a space that plays with the multiple connections between indoor and outdoor, ever-changing and poetic, to kindle curiosity and invite visitors to explore new routes and pathways, guided by the light.
Inspired by the ancient falaj system of Arab engineering, a water channel runs through the museum, making the space into a refreshing oasis that encourages strolling along the waterside. 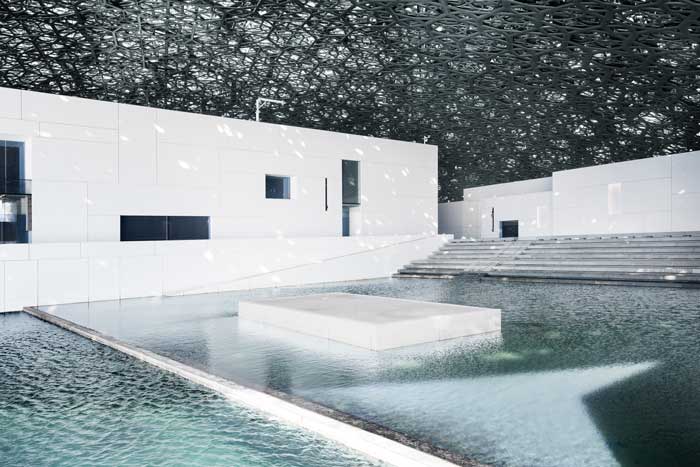 So-called ‘passive’ design strategies take advantage of the natural shape of the buildings and the properties of the materials selected to improve outdoor conditions. The museum’s roof is perforated to capture daylight without letting in too much sun; light-reflecting materials in pale colours have been used to repel rather than absorb heat; reduced-flow plumbing and water facilities were selected to reduce the building’s demand for drinkable water.
The Louvre Abu Dhabi museum is not, in any way, a copy of the French Louvre; it is an individual institution offering its own interpretation of a universal museum, reflecting its era and the local traditions of the country it lies in. Its collection, which will include loans from French institutions (rotated on a ten-year basis), as well as works from its own currently-developing compilation, will be presented in an original manner.
Its uniqueness is based on an overarching vision of artistic creation. Museums traditionally organise their collections by school, technique, and materials, and while this approach does highlight the unique characteristics of a series, it does nothing to show the influences, exchanges, and circulation of ideas and know-how. The Louvre Abu Dhabi’s unique exhibition design explores the connections between civilisations and cultures that may, at first, appear to be far separated by time and geography. Visitors will be guided through a chronological and theme-based display, traversing different periods and civilisations. The display picks out universal themes and common influences to illustrate the similarities that grow out of a shared human experience, beyond any geographical, historical, or cultural boundaries. The result is a truly universal museum. 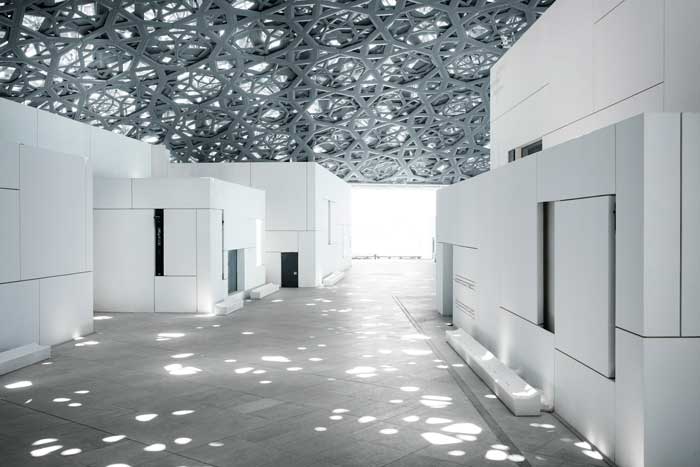 The Louvre Abu Dhabi’s collection began with a blank slate and is growing gradually; it comprises ancient and contemporary works from different countries. The Louvre Abu Dhabi’s ambition is to acquire high-quality works and build up a first-class collection worthy of international recognition. An Acquisitions Committee following the model of the Musée du Louvre’s own committee has been formed. The teams within TCA Abu Dhabi and Agence France-Muséums study proposals and follow acquisition practices. Works are chosen according to the strictest ethical considerations, and their origins are closely scrutinised. The Committee must endorse each acquisition.
These exceptional works include a gold bracelet with lion figures made in Iran nearly 3000 years ago, an Italian gold and garnet fibula (brooch) from the 5th century BC, a superb Virgin and Child by Bellini, paintings by Jordaens, Caillebotte, Manet, Gauguin, and Magritte, a paper collage by Picasso never seen in the public domain, and nine canvasses by the recently deceased American painter Cy Twombly. The collection not only includes pieces from the Middle East and the West but also works such as a Soninke/Djennenke figure from Mali, a dancing Shiva from India, and an octagonal box from China, all bringing influence from other geographical regions. The collection is multidisciplinary and spans every medium: in addition to painting, sculpture, tapestry, goldwork, paper collage, etc., the Louvre Abu Dhabi will also showcase a photography collection and works from the decorative arts, such as a decanter by Christopher Dresser. 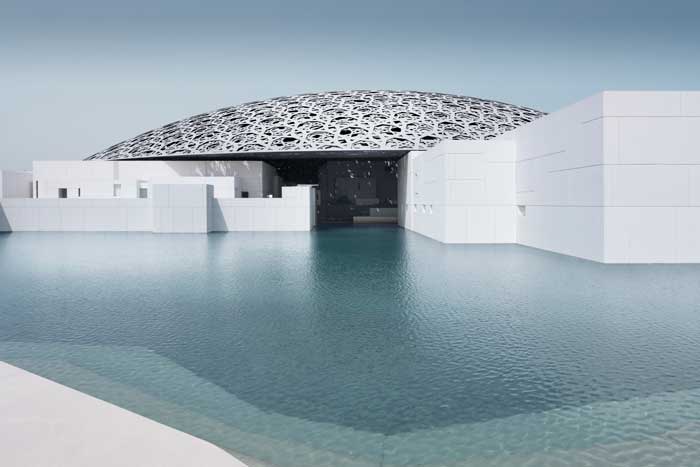 The Louvre Abu Dhabi sets out to be the focal point of a dialogue between civilisations and cultures, symbolically continuing the age-old history of the Arabian Peninsula as a land of convergence and exchange. It is essential for it to convey this spirit of openness and intercultural dialogue. Abu Dhabi’s ambition is to create a platform for education and culture. The museum is located just a few hours from India, in the heart of the Middle East, in a capital of the modern world; it is truly at the crossroads of civilisations. Its own permanent collection is being developed for residents as well as regional and international visitors to admire: a national art collection with something for everyone.
In the very first article of the intergovernmental agreement, the Louvre Abu Dhabi states its ambition to become a place that ‘fosters dialogue between East and West.’ This dialogue, embodied by the relationships between works of art, sculptures, and objects, will invite visitors to explore shared influences and surprising connections between different cultures around the world.
The Louvre Abu Dhabi’s ambition is to form a new major museum with its own collection and eventually become an independent player on the world museum scene. It will draw on French expertise and be built based on a true skill-transfer approach.