Aung Soung’s tiny body is emaciated, her furrowed face a map of her pain and the hard life she suffers. She is only 42 years old but looks 70. ‘Life is tough here if you are poor. So much energy is needed to merely survive,’ says her husband, who brings some food he bought in the street.

Aung is a patient in Yangon’s biggest hospital. The red and white, old, colonial brick building towers over the city centre and has been a hospital since its inauguration in 1889 by English colonisers. Once surely a modern clinic, this building and its annexes have seen much better days.
Myanmar is one of the poorest countries in the world and there is no health insurance system. Money makes the world go round and when there is none, any illness can become a death threat.
To call the space where Aung has settled herself on an uncomfortable raffia mat a cancer ward would be an enormous exaggeration. She lies in front of one of the dilapidated buildings on the concrete walkway with the chemotherapy port in her agonised body.
Street dogs approach and sniff at her. Other patients lie close-packed next to her, and a constant stream of visitors and patients pass by – a scene out of Dante’s Inferno. The hopelessness of the situation is palpable and hard to bear.
Hope is a rare commodity in Aung’s situation, her will to survive so out of place in this hell of a hospital.

There is ongoing transformation in Yangon, Myanmar’s biggest city, but nothing has changed for the general hospital. In its own vastness, the hospital, this pathological place of horror, serves as the epitome of futility and neglect.
The dental ward is crowded with patients; hundreds wait patiently outside for their turn. The waiting can sometimes take two days. At night, the yard becomes an open-air dormitory for those who cannot go home. Street vendors rely on these people and make a good profit. Finally entering the dental ward and seeing a dentist is not the end of the ordeal. With ten dental chairs in a room, all of them containing patients, there is no privacy at all. There is no place for hygiene and comfort here. The dentists are well trained in their profession but the equipment and machinery required to do a proper job are scarce.
Chewing betel nut is a common custom, especially among Burmese men, despite the numerous warnings everywhere. It is not an easy habit to abandon. Oral submucous fibrosis, leukoplakia and even oral cancer are serious medical conditions that result from this habit and are treated here. The chances of survival under the current circumstances are minuscule.

There is ongoing transformation in Yangon, Myanmar’s biggest city, but nothing has changed for the general hospital

Change of scene
Two blocks away from this purgatory, a new shopping mall recently opened its gates. In contrast, this mall is frequented by the affluent new middle class and the wealthy who can afford Gucci handbags and are interested in the current BMW promotion. Shopping malls are seen as a sign of transformation and have become the symbol of this guinea pig capitalism that especially haunts the major cities of Myanmar. As the electricity network has not been improved, these wilful wasters of power use their own diesel generators in order to be independent of the city’s network with its constant power cuts.
While patients in the general hospital lie in the dark for hours, the shoppers here can enjoy the bling and luxury undisturbed.
In a building adjacent to the mall, a new dental clinic opened not long ago. Called ‘Evergreen Dental Clinic’, it is a private, modern dental clinic that could be found anywhere in the world. It caters to wealthy and private patients.
Tun La, the dentist who founded the clinic, came from San Francisco three years ago. He and his family fled Myanmar after the brutal and violent suppression of the People’s Democracy Movement in 1988 and started a new life in the United States. He became a dentist there and later opened a prosperous clinic.
The prospect of social transformation and to giving something back to his tormented home country made him come back to Yangon after his retirement.
He opened this flagship clinic and has employed and educated several young Burmese dentists. 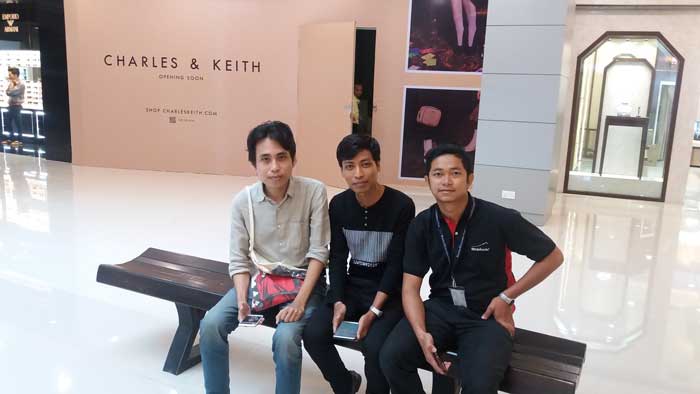 A noble cause maybe, but very few Burmese can afford his services. Those who visit him are expats and the wealthy who accumulated their riches as part of the nomenklatura during the dictatorship.
It is one of those many paradoxes of the transformation in Myanmar: nothing can be changed without the former (and still ruling) rulers who still hold economic power. ‘Before, these people had to travel to Bangkok to be treated professionally. Now, the money stays here and enables us to employ and educate more dentists who will then open new practices and gradually the whole health system can improve this way,’ says the tireless man with an energy that belies his age of 67.
Walking further along the streets, there are many shops run by Indian and Thai hospitals that pursue customers here. There is a new kind of health tourism taking place that the poor Aung Soung has no access to – and doesn’t even know exists. The shop assistants know their business and their customers well and offer tailor-made trips for different budgets and needs – from cancer treatments to facelifts.
It’s bad for the economy of the country but without political and social changes Myanmar’s health system will remain in its current appalling state.
The threat of an accident or an emergency hangs over the people’s lives like the Sword of Damocles.