The Owl House, Helen Martins’ sculpture garden in Nieu Bethesda, is a fascinating place. It exudes an eccentric kind of freedom. My reading of Athol Fugard’s play The Road to Mecca first ignited my interest in Helen Martins’ quest for freedom. Interestingly, Fugard’s play shares the same title with the part travelogue, part autobiography written by Sufi writer Muhammad Asad.

Asad’s early 20th-century compelling story is about his adventures in the Middle East, Afghanistan, India and Arabia. His inner awakening, and his relationships with nomads and royalty alike, set in the wake of the First World War can be read on many levels as a eulogy to a lost world, and as the poignant account of a man’s search for meaning. It is also a love story, defying convention and steeped in loss.
Similarly, as one ventures into the Owl House to take a closer look at Nieu Bethesda’s eccentric artist, one discovers a feisty woman who defied convention and was alienated from her community. Her sculptures of the holy men in their flowing garments and turbaned heads on their pilgrimage (or their ‘Road to Mecca’) represent more than just her eccentric freedom. It is a poignant tale about her own quest for meaning and for acceptance in a world from which she had been lost and, interestingly, it is one to which she returns to live forever.
Helen Martins’ Owl House and sculpture garden are rooted in an extraordinary and enlightening spirituality. It is an attempt to both unpack and challenge the formality of religion. Helen Martins’ interest in the writing of the celebrated 11th-century Sufi poet, Omar Khayyam may have certainly influenced her to delve deeper into eastern mysticism. Her artworks seem to have a deeper spiritual experience that she may have wanted to create for perpetuity.
To anyone who is familiar with Sufi thought or the dance of the dervishes, it is impossible not to notice from the doorway of her house the three sculptures in her garden, each wearing Sufi-styled hats. Their wide skirts are of dervishes dancing. Their outstretched hands form the same pattern that is so familiar with the mystical dance of the dervishes.

My interest in exploring any possibility that Helen Martins may have been inspired by Sufi spirituality was intensified by an introductory video at the Visitor’s Centre in Nieu Bethesda that highlights Helen Martins’ fascination with the writings of Khayyam. The video goes no further to explore if Khayyam’s writings could have influenced the creation of Helen Martins’ sculpture garden.
When the film The Road to Mecca, based on Fugard’s play about Helen’s life, was screened, reviewers in the USA made much about Helen Martins’ sculpture of a mosque that is built on glass beer bottles. Reviewers rightly pointed out that most orthodox/conservative Muslims will be shocked by this image. Sufi adherents, however, were not appalled by the sculpture. For them, the beer-bottled mosque had a fascinating connection with Khayyam’s writings: ‘Drink! for you know not whence you came nor why: drink! for you know not why you go, nor where.’
Sufi adherents might even find a more significant connection in Sufi philosopher Rumi’s writings in his Quatrain 305 of the Rubaiyat: ‘On the seeker’s path, wise men and fools are one. In His love, brothers and strangers are one. Go on! Drink the wine of the Beloved! In that faith, Muslims and pagans are one.’
The way in which Helen Martins painted her house and the three colours that she used might add some interest for Sufi scholars: green, yellow and red. These colours represent the three states of consciousness in Sufism. Yellow represents the psyche/mind. Red represents the spiritual heart. Green represents the soul. Could Helen Martins have found this from her reading/fascination with Khayyam’s writings? 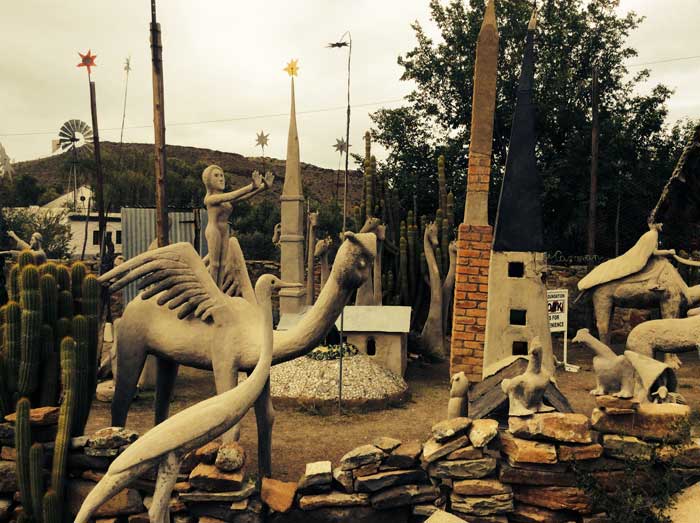 Before her father’s death, Helen Martins painted his room all black. The general trend of thought is that she did it to punish him because he was known for abusing her. When one considers this within the context of Sufism, the black room also offers some meaning. Black in Sufism symbolises epiphany/realisation. It is the colour from which all other light reflects/emerges. There is a school of Sufism that meditates in a darkened (blacked out) room. It is believed that that darkened room helps them to focus and see the light (metaphorically). Could Helen Martins have put her father in the black room hoping that he too would be able to meditate on how he abused her and hence have his epiphany?
The Owl House is now the name by which this interesting home of the eccentric South African artist is known. The name is derived from Helen’s fascination with owls. Idries Shah, a leading scholar of Sufi thought writes in his book, The Way Of The Sufi: ‘Owls, the most shrilled voiced birds aren’t imprisoned. Owls are not kept in cages.’ Compare that with what western art historians write about Helen Martins being an ‘uncaged eccentric’.
Westerners consider the owl to be a symbol of wisdom. In Sufi thinking, the owl is the mystical bird that transcends the physical world. In 12th-century Sufi writer, Farid ud-Din Attar’s, book, The Conference of the Birds, he makes reference to the uncaged, mystical bird. He refers to a creature that is outside of this world and which exists in the spirit world. He refers to this bird as the Simorgh – a word with Persian derivatives. It means a gathering of 30 birds. I wonder if anyone has counted the number of owls in Helen Martins’ garden?

As one ventures into the Owl House to take a closer look at Nieu Bethesda’s eccentric artist, one discovers a feisty woman who defied convention and was alienated from her community

In Attar’s book, he also refers to the ponds in which the birds see their own reflection as they try to reach new forms of spirituality. Did Helen Martins also build the little ponds in her garden for the birds to see their own reflection? Attar also refers to the seven states that one transcends to find true Sufi spirituality. In Helen Martins’ garden, she has built a sculpture of a church, mosque, temple, etc. could each of these represent the seven states of spirituality?
Helen Martins found greater freedom after she ended her tumultuous marriage and literally ‘flew away’ from the small, conservatively-oppressive Christian-dominated town of Volksrust to return to Nieu Bethesda where she found her new wings to fly again. These lines of Rumi’s poem are synonymous with the kind of freedom that Helen Martins found after falling out of a social circle that increasingly saw her as eccentric, nuts and weird: ‘Birds make great sky-circles of their freedom. How do they learn it? They fall, and falling, they’re given wings.’
I can only guess, that Helen Martins drew inspiration from another of Rumi’s wise words:
‘When I die, I shall soar with angels, and when I die to the angels, what I shall become you cannot imagine.’ Who would have imagined that this mad, weird, eccentric women shunned by the small village would one day become a ‘mystic’ herself, her home would become a ‘shrine’ to which ‘arts worshippers’ would descend and like all mausoleums/shrines/ashrams the poor folk around it would beg and sell their wares to earn a living while the more entrepreneurial would settle in around the precinct to sell food, accommodation and mementoes to the wealthy ‘worshippers’ who come to pay homage to her.
My fascination with the idea that Sufi thought may have influenced Helen Martins is untested. It needs to be challenged. It will also probably be scorned by art historians and scholars of Helen Martins’ work. But it doesn’t deter me from exploring further ‘The Untold Wisdom of the Owls’.
This year is the 40th anniversary of Helen Martins’ suicide. This year marks her 120th birthday. I am hoping that the 120th birthday of the grand old lady of Nieu Bethesda might just unearth some insights which have not yet been explored far enough by South African art academics who are groomed in western schools of thought. I am no art historian so I have no theoretical background to support my observations. I will leave that for art academics to do.