Blonde Poison, the gripping story of Nazi betrayer Stella Goldschlag, returns to the Auto and General Theatre on the Square from January 30 until February 18. 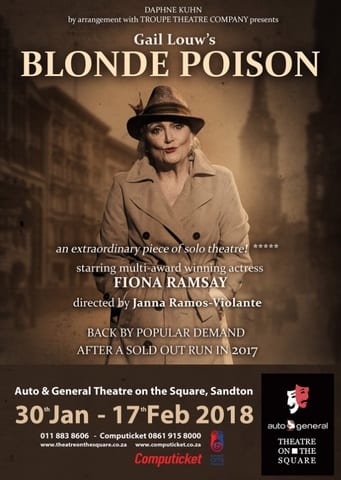 Presented by Daphne Kuhn by arrangement with Troupe Theatre Company, it once again stars multi-award-winning actress Fiona Ramsay, directed by Janna Ramos-Violante.
The international play, written by Gail Louw, deals with themes of betrayal for survival, beauty and treachery, in a world beset with mistrust and espionage. It has a hugely successful run at the theatre last year.
Fiona Ramsay plays Stella Goldschlag, living illegally in war torn Berlin where she was betrayed, beaten and tortured. When offered the chance of saving herself and her parents from the death camps, she became a “greifer” or “catcher” for the Gestapo giving information and “ratting” on Jews in hiding. Stella’s character ranges from a tortured and pitiful victim to a callous cruel agent of death, from a beloved and loving daughter to the pitiless betrayer of friends and from gentle and tender lover to a woman of depraved and decadent promiscuity. She was dubbed the Marilyn Monroe of Berlin and awarded the alias Blonde Poison by the Gestapo, who embroiled her in the murky world of treachery.
Decades after the war, Stella agrees to an interview with a childhood friend, now a respected journalist – which offers her a last chance at redemption. Can she ever be released from her past? Despite the choices Stella made she is not necessarily a villain, and she forces the audience to confront our own humanity, raising questions of ethical and moral choice and acknowledging the cruelty that resides within us all.

Stella’s character ranges from a tortured and pitiful victim to a callous cruel agent of death, from a beloved and loving daughter to the pitiless betrayer of friends and from gentle and tender lover to a woman of depraved and decadent promiscuity.

Set against the backdrop of the Holocaust, Blonde Poison is a morality tale posing the central question: What would I have done in her place? The play encourages us all to confront our humanity, and the choices we make when threatened with certain deportation, possible displacement, vicious persecution and the horrors of war.
Blonde Poison was one of the first plays is written by South African playwright, Gail Louw, now living in the UK. Her play Miss Dietrich Regrets, based on the life of Marlene Dietrich and her daughter Maria Riva, was produced in 2016 at the Auto & General Theatre on the Square in Sandton. Fiona Ramsay inhabited the role of the aging star and icon Marlene Dietrich and Janna played her concerned daughter Maria. The production garnered four prestigious Naledi Theatre Award nominations and Fiona Ramsay, the recipient of the Best Actress award at the 2016 ceremony.
Blonde Poison will run at the Auto & General Theatre on the Square from 30 January – 18 February 2018. There will be 6 performances per week – Tuesdays to Fridays at 20:15 and two shows on Saturdays at 18:00 and 20:15. A matinee is planned for 18 February. Enquire about school and group discounts and dinner/show specials. Call the theatre’s box office on 011 883 8606 or book online: www.computicket.com or phone the call centre: 0861 915 8000