Weaving together an abstract narrative of personal experiences and histories, Igshaan Adams’ work questions the self and his ‘hybrid identity’. His Standard Bank Young Artist Award for Visual Art 2017 cements his place as one of the country’s top young artists. 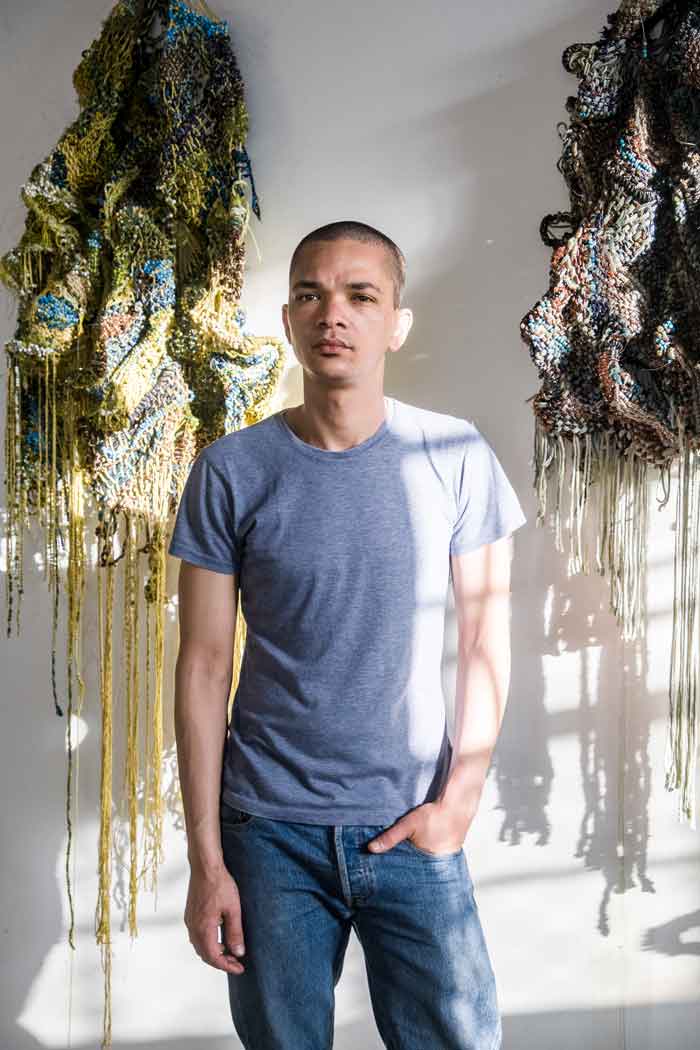 ­  Igshaan Adams was born in 1982 in Cape Town. Combining aspects of performance, weaving, sculpture and installation that draw upon his upbringing, his cross-disciplinary practice is an ongoing investigation into hybrid identity, particularly in relation to race and sexuality. Raised by Christian grandparents in a community racially classified under apartheid as ‘coloured’ under apartheid legislature, he is an observant but liberal Muslim who occupies a precarious place in his religious community because of his homosexuality. As such, the quiet activism of Adams’s work speaks to his experiences of racial, religious and sexual liminality, while breaking with the strong representational convention found in recent South African art. He uses the material and formal iconographies of Islam and ‘coloured’ culture to develop a more equivocal, phenomenological approach towards these concerns and offer a novel, affective view of cultural hybridity.
­  To date, Adams has held seven solo exhibitions at various galleries in South Africa and The Netherlands. He has also participated in numerous group shows, both locally and internationally, including Les jour qui vient (2017) at the Galerie des Galeries in Paris, Sacre du Printemps (2015) at the Grazer Kunstverein in Graz and Barriers (2015) at the Wanås Foundation in Knislinge, Sweden. Adams has been selected for a number of artist residencies, among them the Sommerakademie im Zentrum Paul Klee in Bern, Switzerland and the IAAB / Pro Helvetia residency, Basel, Switzerland.

I think, for any young artist in South Africa, this is the one – certainly for me

­  What the Standard Bank Young Artist Award means to him is ‘difficult to pin down,’ says Adams. ‘I think, for any young artist in South Africa, this is the one – certainly for me. When I started out many years ago, this was the one award I wanted more than any other award, because I felt that this one was almost unachievable at that point. I felt like it was the biggest one. I wanted to go big and so I had a list early on of things I wanted to achieve in my career and this was one of the top ones. So this is quite an amazing moment for me.
­  ‘I mean, it’s the recognition of the people, your own people, you know?’
­  Adams also emphasises the prestige that comes with the Standard Bank Young Artist Award in that it is not something you can apply for – you have to be chosen.
­  Currently, Adams is preparing for his solo exhibition at blank projects in January 2018, which he says ‘will be a little more simplified in its presentation’ than his previous exhibition, which was ‘noisy and organic’. For his Standard Bank Young Artist exhibition, Adams is considering using scents and smell as his inspiration, a starting point.

Meet all of the #SBYA2018 award winners: